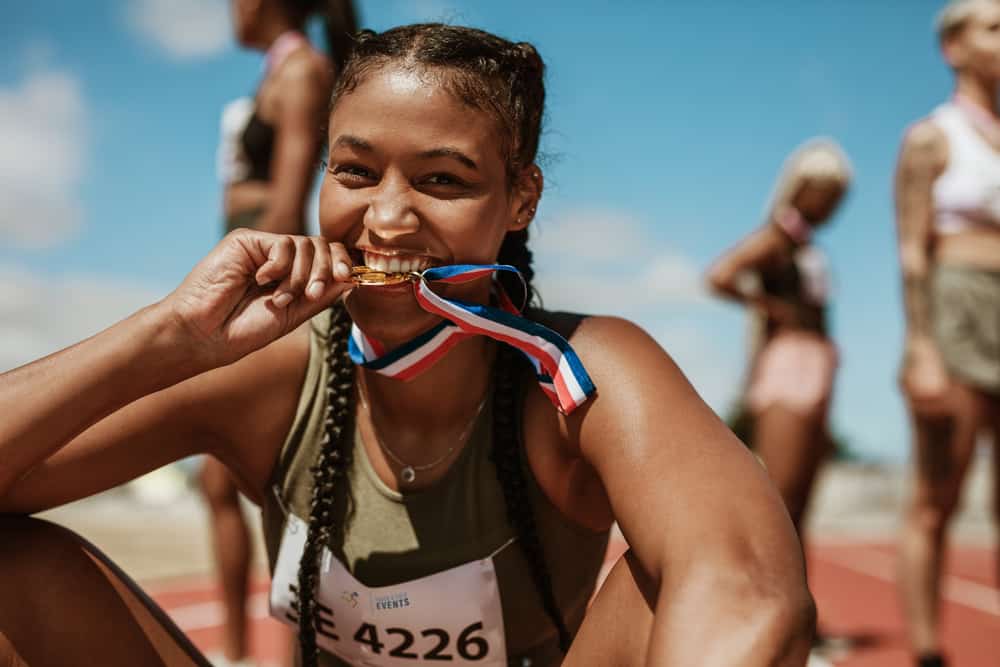 You may have seen some excited athlete on the podium during a medal ceremony. And maybe in a cheeky moment – sometimes through pressure from the press – they bite their medal. It’s a common trick to see whether gold is real. So … are Olympic medals solid gold?

An Overview of the Olympics

A lot of modern philosophy, culture, and practice comes from the Ancient Greeks in Athens, including the Olympics. These competitive games were first held in Olympia, starting in the 8th Century BC until about the 4th Century AD. Greek city-states sent their best sports stars to compete. We continue today as various nations send top athletes to represent their country.

The first contemporary Olympics began in 1896 and come around every four years. But because of climatic regions and seasonal sports, the Winter Olympics were introduced in 1924 to cover snow sports. Today, the Olympics still follow their four-year cycle. Summer Olympics typically fall on leap years, then two years later, we have Winter Olympics instead.

Curiously, some sports – especially combat events like martial arts and boxing – typically have two bronze positions. So every Olympics, you’ll find more bronze medals than any other. The Olympics give younger athletes the exposure to go pro, and every participant up to 8th place gets an Olympic Diploma. Medalists get their names on the hosting stadium wall.

Gold, Silver, Bronze, and Others

By 1904, the gold, silver, and bronze medals were official, and the IOC backdated the medals for 1896 and 1900. While the Summer Olympics has regular round medals in gold, silver, or bronze, the Winter Olympics sometimes uses different styles and shapes. Winter medals can have other materials infused into the metal e.g. glass, jade, lacquer, or recycled electronics.

The Olympics are always hosted in a different country, allowing the host city to showcase its beauty and accomplishments. The International Olympic Committee decides which nation gets to host, and competition can get quite fierce before the vote. Apart from bragging rights, the Olympics bring a lot of money into the host economy, and all that publicity is priceless!

Did you know it’s not just the top three that get medals? Their backup teams, event officials, support staff, and even some volunteers get commemorative medals. These participation trophies are made of pewter, copper, bronze, or other metals. They feature official imagery and celebrate the Olympic Spirit. The host country mints the medals and picks their design.

The front design changes from time to time, but the obverse (front side of the medal) usually has Nike (the Greek goddess of victory) the Olympic Rings symbol and the official name and year of the event. At first, winners would line up and walk past event officials to receive their medals. In 1960, that tear-jerking ceremony began, with the anthems and the neck ribbons.

The Making of Olympic Gold Medals

The medal designs for Summer Olympics are more standardized, with over 200 countries sending representatives. But the Winter Olympics attract participants from less than 100 countries, and they have far more leeway in imagery. That said, the IOC gets the final vote, so they still have to approve. And the precious metal composition is universal – only 6g of gold.

That gold is about 1% of the metal by volume, and the silver is often recycled. In Rio 2016, the silver came from x-ray plates and old mirrors.

In Tokyo 2020 (held in 2021 because of Covid), citizens donated electronics that were melted down to make the medals. And the Tong Xin medals for Beijing 2022 are concentric circle pendants that pay tribute to history.

You may have noticed the percentages don’t add up. If 92.5% is silver and 1.2% is gold, what forms the rest of the medal? We’ve mentioned that Winter Olympic medals might have trace components like sparagmite, or Ancient Chinese jade. The recycled gadgets used to make the Tokyo 2020 medals came from mobile phones and small electronic devices donated by fans.

Where does all that money come from, and who pays for the Olympic Games? The host state will use its citizens’ tax money to build the stadiums and facilities. But the administrative costs are covered by the IOC, which runs as a non-profit organization. Funding comes from endorsements and broadcasting rights, which may be why their branding rules are so strict.

When we say The Olympics, we’re mostly referring to the Summer Olympics. More countries participate than in the winter version. So, are Olympic medals solid gold? They were until 1912, but in modern times, the Olympic gold medal is 92.5% sterling silver, with 6g of 24k of pure gold covering the outside of the medal. In 2022, a medal is worth $750 at market rates.