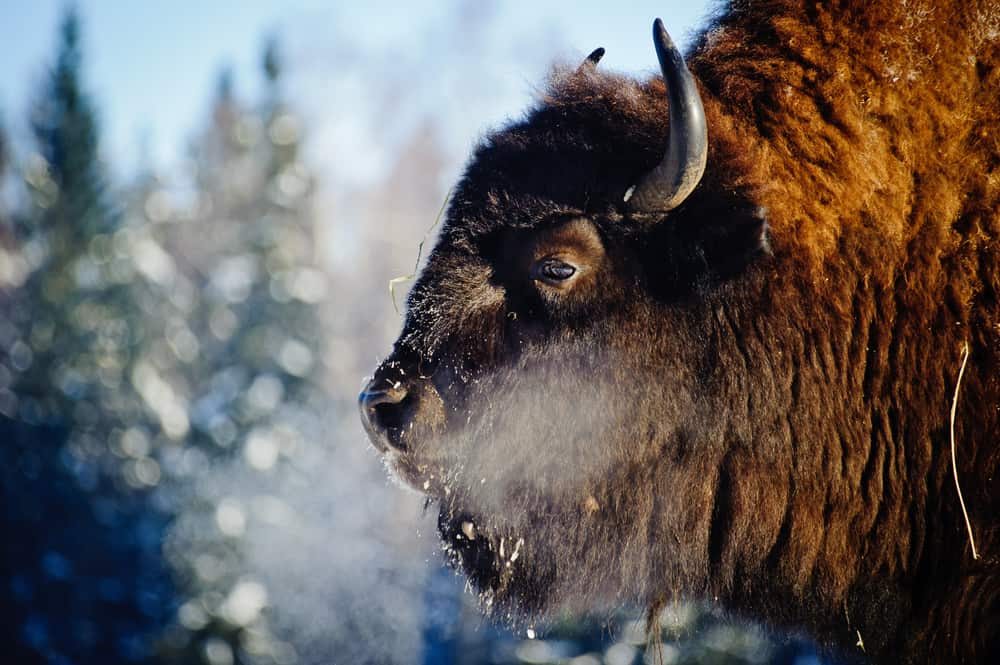 Beautiful, majestic, and powerful, the bison is a welcomed sight for many people. As a spirit animal, it can unlock many opportunities for us – if we are open to it.

Throughout history, they have always been natural symbols of sustenance, protection, strength, and humility. And more recently, they’re potent signs of community, inspiration, and gratitude.

Today, we’ll explore the rich depths of bison symbolism. Whether you’ve witnessed them in a recent dream or experienced some emotional exposure in your waking life, the bison has chosen you for a reason.

10 Meanings of a Bison as your spirit animal

1. You will have all your needs met

The bison is a natural spirit animal of abundance and stamina. Because they live in large herds, they are a constant supply of food and sustenance for various predators. Bison are also strongly connected to Mother Earth and live off the land without ever exhausting its resources.

For Native Americans, the bison played a vital role in a tribe’s survival. They used them for everything, including for meat, clothing, shelter, and as part of tribal ceremonies. The very sight of a herd could sustain a community indefinitely, and hunters were delighted to see them from afar.

In this way, buffalo can help fulfill your needs in several areas of your life, including your general health and well-being, romance, spirituality, and satisfaction. With the bison’s guidance, you will feel grounded and satisfied with life.

2. You enjoy the company of like-minded people

As with many herd animals, the bison is a spirit animal that appreciates the company of its kind. By surrounding yourself with like-minded people, you will live in harmony and become the best version of yourself.

There is safety in numbers when you move as a herd. Not only that, as a spirit animal, it can represent that you’re a team player and strive for unity. People enjoy your company, and you are a positive force to be around.

That said, there is one slight caveat to this behavior. Standing out from the crowd can be difficult as part of the herd. Be mindful that the bison spirit animal doesn’t din your shine and make you generic. Keep some part of you separate from the rest of the crowd.

3. You will come into a significant fortune

The bison is also a powerful symbol of prosperity and fortune; in many mythologies, they were highly sought after. In some instances, entire wars were fought to collect and secure valuable bulls.

One of the most famous accounts is the Táin Bó Cúailnge (Brown Bull of Cooley), from Celtic Mythology. Legend states that the brown bull was a prized fighter across Ireland, and two warring armies fought bitterly to own it.

Using this interpretation, having the bison as a spirit animal means you have a valuable ally in your corner. This means you have luck on your side and will receive something special.

But it’s also worth noting that the bison is a coveted spirit animal that may invoke jealousy in those around it. Be careful of your possessions and the intentions of those around you.

4. You need to take things slowly in life

The bison’s quiet lifestyle and temperament can help calm even the most chaotic lives. As herbivores, this powerful animal teaches us humility and patience and can help us hit a pause on the disorder.

Despite the size and muscle of the bison, it is slow and steady and lives a modest existence. By channeling this power, you can become more present and grateful in your own life.

The bison also teaches you about perseverance. Its sheer size allows it to withstand any weather, storm, and element. It only has a handful of predators like wolves, which can only subdue the bison when they hunt in packs.

From this teaching, you must make concrete plans and follow them. This will help structure your life, face future adversity, and allow you to regain your footing.

5. You need to reconnect more with the earth element

The bison as an animal totem teaches us to reconnect with nature and Mother Earth. Because they graze on vegetation, they are deeply connected to their locality and have reverence for the environment.

Sadly, the present-day bison is an endangered species in many such environments, so you must always ensure your safety. This circumstance compels you to enhance your garden, take care of your surroundings, and keep conservation in the back of your mind—only then will the bison totem animal feel secure and carefree on its journey with you.

6. You will endure and overcome

One of the most prevalent meanings of bison is that endurance and durability. They can take a knock, an attack, or an injury in their stride. They keep going until the very end.

This perseverance in the face of overhunting makes the bison a potent symbol of stamina and resilience. Furthermore, the fact that they are found in many parts of the world signifies their resourcefulness to keep going.

The water buffalo, for example, is one of the most popular domesticated animals in human history. Over 130 million of them exist, proving that the bison as a species of animal is one of provision, endurance, and fortitude.

7. It would be best if you practiced more self-control

The bison is a humble spirit animal. Despite its sheer size, it is a gentle giant and does not needlessly exert itself or show off. It will only defend itself if needs be.

From this, this giant animal with a soft heart teaches us humility and self-control. Perhaps you are a hot-tempered person who jumps to conclusions quickly without giving much thought to things.

The bison teaches you to be more reflective in your actions. Don’t always assume the worse is going to happen. Only when you have all the information can you react to something. Till then, take things slowly and always strive for a peaceful resolution.

8. You’ve received a blessing of protection

In the wild, the white buffalo is a rare occurrence. So when you witness one in your dreams, you should stop and take note; you’re receiving a rare, potent blessing.

White animals are natural symbols of divine workings, resurrection, reinvention, and protection. A white buffalo channels all of these positive attributes to you.

It would be best if you had a spring in your step in the coming days and weeks ahead. Someone is watching out for you. The peaceful nature of the white buffalo, together with its natural symbolism of abundance, means you will receive everything you need in life.

Furthermore, white is a potent symbol of resurrection, and this may indicate an ancestor is looking out for you. Have you recently lost a loved one? Perhaps the white buffalo is a messenger from the afterlife, letting you know they’re safe and secure.

9. You are an effective parent or role model to someone

Like cows and other bovine species, the buffalo is an influential mother, with some of the most nutritious milk in the animal kingdom.

They are naturally a symbol of parental instincts, guardianship, and provision. No doubt you are a generous person who gives your all for the benefit of others. You also feel your best when you’re being used to someone else.

The buffalo’s appearance to you is a recognition of your sacrifices and your dedication to those around you. Especially if you are a parent, their arrival symbolizes that you play a crucial role in your child’s life right now.

The only danger with this interpretation is that you must be careful you don’t spread yourself too thin. Sometimes, you might not even realize that you’ve depleted yourself of your resources. Mind yourself first and foremost before caring for others.

10. Time to be more grateful in life; slow down

As grazers, the bison is a natural symbol of taking things slow, day by day, and appreciating the smaller things in life.

Despite its sheer size, it is a gentle giant that doesn’t take more than it needs. Perhaps its appearance in your life is asking for more modesty and gratefulness.

Try to adopt its natural humility; stop focusing on what you don’t have, and appreciate what you do. A lot is happening in your life right now that you should celebrate. Take stock of where you’ve been, just as much as where you’re going.

The bison is one of nature’s gentle giants. Its sheer size contrasts starkly with its quiet demeanor and simple existence.

As large grazers, these animals are natural symbols of abundance, stability, and nourishment. By witnessing them in your dreams, you are being sent a generous gift that all your immediate needs will be met.

That said, the bison is a humble animal that relies on the strength and support of its herd. Reflect on their humility and need for teamwork, and you will surely flourish in the challenges ahead.