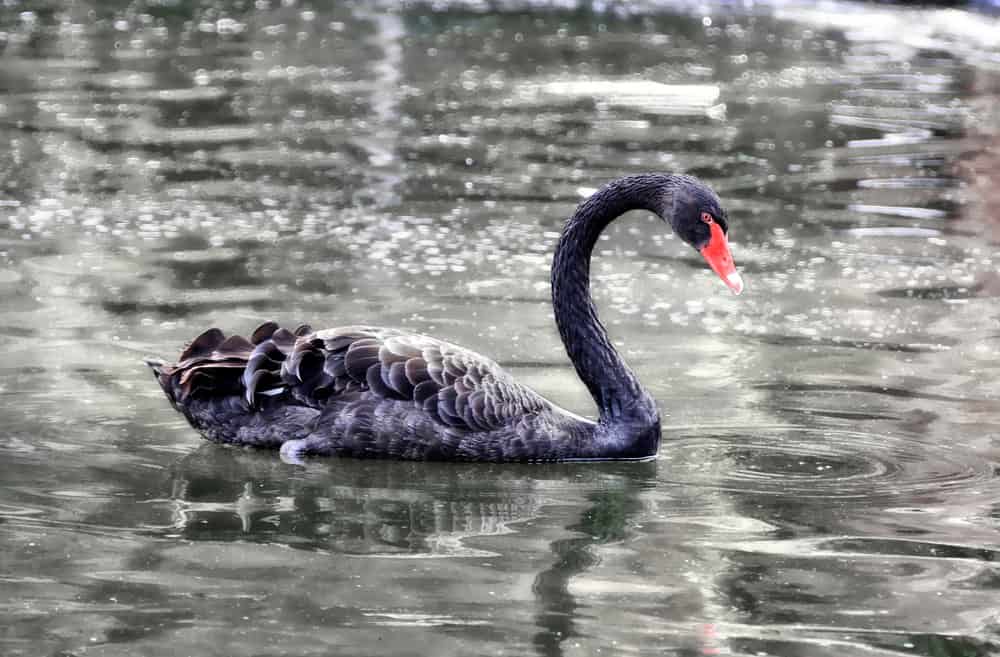 A black swan is one of the most alluring birds out there. Its white counterpart is universally regarded as the most beautiful, elegant, and graceful bird, but the black swan is often met with confusion and mistrust. However, a black swan is as much, if not more beautiful than its white relative.

In this article, we’re going to cover black swan symbolism, from its place in culture and mythology to the symbolic significance and dream meaning.

There are 6 swan species. All of them are white, except for one, Cygnus atratus, or simply the black swan. It naturally inhabits just Australia, more specifically the west coast of the continent. On the other hand, you can find white swans in their natural habitat all around the world, from the Far East in China, to Zona Sur in Chile.

As a result, a black swan isn’t as prevalent in mythology and culture as a white swan. However, where it is present, that is in Australia, it’s one of the most respected symbols.

Nearly every group of aboriginal people in Australia, specifically near the west coast, have myths and legends regarding black swans. One of the most popular stories is about Wurrunna, who’s a mythological hero credited with many achievements.

He used magic to transform a pair of brothers into white swans as a disguise, so they could sneak up on his enemies. However, after being turned into swans, the brothers got attacked first.

Not by enemies though, but by eagles. The evil creatures ripped off every single swan feather, leaving the brothers bare. Luckily, the crows came to the rescue.

The crows chased away the eagles, and gifted their own feathers to the swans, making them black. That’s one of the origin stories of black swans, representing the symbolism of transformation, purity, and spirituality.

The transformation isn’t just external, but also internal. Staying true to oneself and not surrendering can often transform the person from being defeated to being the one who defeats.

Other variations of the story have a different context, but most of them end the same – the crows share their black feathers with plucked white swans, who become black. This motif is extremely prevalent, and many Aboriginal tribes have a black swan as their totem animal.

Black swans maintained a special place in Australian hearts to this day. For example, the bird is depicted on the coat of arms of Western Australia, and the cities of Bunbury, Northam, and Perth. A black swan is used even in several municipal coats of arms, including Gosnells, Fremantle, Melville, and Subiaco.

Such widespread love of the bird in the region just proves its symbolic meaning and significance. It’s the ultimate symbol of grace, elegance, pride, and insight.

The first European to mention black swans was Decimus Junius Juvenalis, a Roman poet. In his collection of works known as “The Satires” written in the 1st century AD, Juvenalis wrote:

It roughly translates to “a bird as rare upon the earth as a black swan”. So, he used a black swan as a metaphor for something incredibly rare or something that doesn’t exist at all. It should come as no surprise because there were no black swans in 1st century Rome.

Naturally, the black swan became a symbol of rarity, impossibility, uniqueness, or even absurdity and preposterousness. It wasn’t 15 centuries later that Europeans saw black swans with their own eyes for the first time in history. In 1668, a Dutch explorer Willem de Vlamingh set on a voyage to the west coast of Australia.

There, he saw several black swans and brought a few of them back home to Europe. Everyone was shocked that black swans, indeed, exist. It changed the symbolic meaning of a black swan in the 17th century. This bird became a symbol of grace, beauty, and transformation, just like its white counterpart.

However, in the 20th century, the symbolism somewhat returned to its initial meaning of improbability. Many philosophers used the story of black swans to argue ideas related to rare events and falsifiability.

Now we can investigate the symbolism of a black swan in more detail. While a black swan is endemic to Australia, it shares much of its symbolism with its white cousins that are native to Eurasia and the Americas. That said, the bird has its own symbolic twist and several unique characteristics.

Just like white swans, black swans symbolize beauty and grace. Simply taking a glance at these birds makes it obvious why. Swans move gracefully through the water, with a hint of earned pride.

Back in Ancient Greece, white swans were associated with Aphrodite, the goddess of beauty, and Apollo, the son of Zeus and the god of the Sun and light.

However, black swans are even more graceful than white swans, because they have the longest necks out of all swan species. It also takes the most prominent “S”-shape, featuring more elegant curves than its white counterparts.

Contrarily, swans remain loyal to their soul mate for the rest of their lives, mating only with a single partner. Additionally, when a couple reunites at their nest, the swans touch their beaks forming a heart. There cannot be a more obvious symbol than that.

Many people are familiar with the Danish fairytale “The Ugly Duckling”. It tells a story about a juvenile bird that thinks he’s too worthless and ugly to be accepted by the beautiful swans. After enduring countless hardships, the ugly bird encounters swans again, and they welcome him with open arms (wings?).

Only then does he realize that he’s a beautiful swan himself, and not an ugly duckling. Black swan cygnets are born light grey with black beaks. Only by maturing does their plumage achieve the deep black color, and the beaks become vibrant red.

While juvenile cygnets are actually pretty cute in real life, and not in any way “ugly ducklings”, the tale still shows how swans symbolize transformation and personal development. Most people at birth are comparable to ducklings. We aren’t born with special talents, and if we are, talents still require time and effort to develop.

A black swan can inspire us to not give up, but instead keep working towards becoming the best version of ourselves, that exists in each and every one of us. Transforming and attaining our outer and inner beauty can, and does happen if you keep persisting.

A black swan is also a symbol of exclusivity. After all, it wasn’t until the 20th century that a substantial number of black swans got introduced to Europe and Asia. Now, in the 21st century, there are sizeable populations of black swans located outside their native habitat Australia.

However, seeing a black swan still evokes awe and wonder in most people. It’s because black swans are exclusive, rare, and special, even when compared to white swans, which are wonderful birds in their own right.

At first glance, these two things might not seem to go hand in hand at all. It could even be fair to say that uncertainty and fortune are contradictory, and that’s true. However, a black swan symbolizes these two things for the same reason – the improbability of its existence.

I’m referencing the European cultural background of the black swan, where the bird was a metaphor for something that doesn’t exist or is incredibly improbable. As a result, a black swan represents uncertainty – does the black swan exist? Likewise, it symbolizes fortune, because encountering one when you don’t think it even exists is nothing short of fortunate.

Some people interpret black swan dreams as a bad omen. However, it’s rarely the case that it represents some sort of negativity. Just because something is black doesn’t mean it’s evil, bad, or wrong.

The color black symbolizes much more than that. While it represents the dangerous uncertainty in the unknown, the color black also includes the nurturing nature of the Mother. Thus, you shouldn’t panic after dreaming about a black swan.

This bird appearing in your dreams might be a representation of your unconscious mind, which came up to you as a reminder, that you aren’t the “ugly duckling”, but rather a beautiful swan.

Black swans are wonderful birds representing everything that white swans are, but more. The unique circumstance of being native to Australia made them elusive, improbable, and outright unbelievable.

However, after being introduced to the rest of the world, black swans became some of the most impressive birds to those who were fortunate enough to see them in real life.