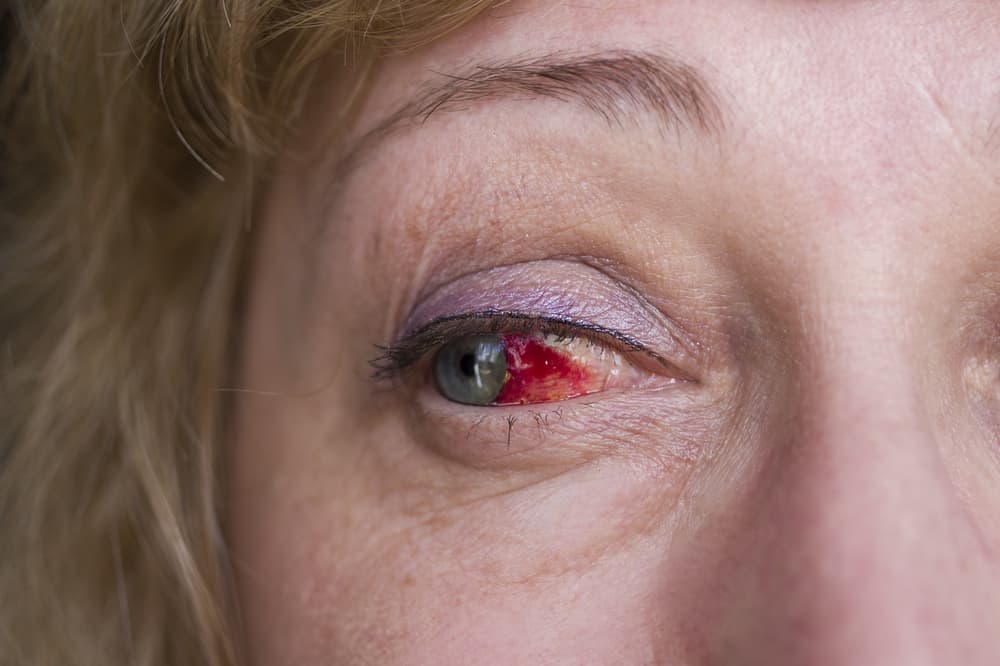 People have been interpreting dreams since ancient times. Dreams can give us insight into our waking life.

Some dreams are pleasant. Others have nightmarish qualities that unsettle us. Dreams that cause distress such as a dream about bleeding eyes.

Bleeding eyes are shocking imagery and are likely to leave the dreamer questioning what it could mean. Is it an omen of bad luck or are there any positive interpretations of bleeding eyes dreams?

Read on to find out what dreaming about bleeding eyes could symbolize.

Dreaming about eyes and bleeding

Before we focus on bleeding eyes in a dream, let’s briefly look at the symbolism of eyes and bleeding in a dream.

Spiritually, eyes are connected with our third eye, inner power, and intuition. People going through a spiritual awakening in their lives will often dream about eyes.

How your dream about eyes is interpreted depends on the context. For example, did you dream about your own eyes or someone else’s? Was it a dream about one or two eyes? What was happening to the eyes? Were they open, closed, or perhaps bleeding?

Some of the more common interpretations of dreaming about eyes include the ability to see things from a different perspective and being able to analyze situations without judgment. It could also mean that there is something in your life that you are not paying enough attention to.

To read more about the interpretations of eyes in a dream, visit the Dream Dictionary.

Dreams of Blood and Bleeding

When we dream of blood or bleeding, we need to consider the details of the dream, our current life situation, and what emotions were attached to the bleeding in the dream.

In dreams, blood is a symbol of life and vitality, and dreaming of blood is linked to life energy, passion, blessings, and devotion to your reality. Dreams of blood can symbolize that you are going through a period of revival in your life. Blood is also symbolic of longevity, abundance, resilience, and strength.

However, if you dream of losing blood, it could mean that you are losing your power in reality. It might be telling you that you have a weakness or that something is draining your energy. Dreams of blood or bleeding can also be a warning sign of obstacles or danger entering your life.

To read more about the symbolism of blood and bleeding in dreams, we recommend this article.

Interpreting dreams is never as simple as attributing a single meaning to them. Instead, a single image, such as a bleeding eye can have multiple interpretations depending on the context of the dream. They also depend on what is going on in our waking life.

When you are figuring out what your dream about bleeding eyes could mean, remember to focus on the details. Was it one or two or even multiple eyes? Were your eyes bleeding, or did you see someone else’s eyes bleeding? What were we thinking of, doing, or feeling at the point of the dream when the bleeding eye/s appeared?

Here are some interpretations of dreams with bleeding eyes.

A bleeding eye dream could mean that you are generating something new. Nourishment and rewards could be coming your way together with success and pleasure.

It could also signify gaining more clarity on your goals. It could be telling you to harness your power and find a new way to express yourself. Maybe there is a message encouraging you to take chances to get ahead in life.

Have you perhaps started a new project or a job in your life? In that case, a bleeding eyes dream could be letting you know you will get a good start on your new project. If you focus on it and work hard, you will reap the rewards from your work.

A dream of bleeding eyes could also be linked to your spiritual journey, signifying that you are making great progress. You are going through a period of wisdom and can achieve any goal you set yourself as long as you set your mind to it.

If you dream of bleeding eyes, it could be a metaphor for something you are unwilling to confront. Instead of finding a solution to your troubles, you are going around in circles. It might prompt you to consider what is preventing you from achieving your goals. Could it be a significant event, the disapproval of others, or a person acting from jealousy?

Eyes bleeding in a dream could be a message that you are about to make a rash decision because your judgment is clouded. Perhaps you are rushing to get something completed and have lost sight of the bigger goal.

There are some more specific meanings associated with bleeding eye dreams. At first sight, they come across as negative. However, if you take the dream meanings as guidance, it can help us get through a difficult period with more ease.

There could be Financial Troubles Ahead

Unfortunately, dreaming of bleeding eyes can mean that your economic situation is about to deteriorate. The dream is preparing you for possible bad news and is advising you to start saving. If you make good decisions early on, you will get through the hard phase more easily.

Watch out for arguments with family or friends or at work

Dreams of bleeding eyes could mean someone close to you will trick you. This will wound you and lead you to question how well you know people.

The dream is also a reminder not to tarnish everyone with the same brush. Despite the suffering caused by the argument, there are genuine people in your life who wish you happiness and success.

The adversity the dream is warning you about could also relate to work rather than private life. There may be a dispute at work that is generating hostility. The dream is a message from your own consciousness telling you to keep calm and look for a solution. Your coworkers and boss will value your efforts to maintain peace in your work surroundings.

You might dream of bleeding eyes when you have lost your self-confidence. You might even be sinking into depression as you struggle to see things in the long term. The dream is telling you to trust yourself. It is guiding you towards your intuition as that will practically never deceive you.

If you dream of bleeding eyes when you are in a relationship, it could be a sign that you are no longer sure about how you feel towards the other person. It may mean you need more liberty to express yourself within your relationship. The dream might also indicate there is a mutual suspicion that needs to be addressed.

For singles, a dream of bleeding eyes is a metaphor for a complicated love life. You want a relationship, but you are too guarded and will not allow people to get close to you. This can discourage potential partners and ultimately drive them away.

If the eyes bleeding in the dream are someone else’s, it can mean that the dreamer is going through a period of heightened charm. This will make it easier to attract a partner.

Dreams of other people’s eyes bleeding

If you have a dream where someone else’s eyes are bleeding, it symbolizes the positive and friendly signals coming from you. You are finding it easy to create an inclusive and considerate atmosphere at home, between friends, or at work.

The dream also reminds you that some people might have ulterior motives. Such people may look to cause a scandal by spreading untruths. However, as long as you maintain a positive outlook, you will sort these problems out before they can cause lasting harm.

For more possible meanings, you can check this article from DreamDirectory.

Although dreaming of bleeding eyes can certainly be unsettling, it is worth remembering it isn’t necessarily a bad omen. There are many positive interpretations, and even if the message is a warning, it usually comes in time for us to take action to prevent the situation from escalating.

When you are interpreting your bleeding eyes dream, remember to consider the context of the dream as well as what is happening in your life. If you have anything you would like to ask about bleeding eyes in a dream, write your questions in the comments section.