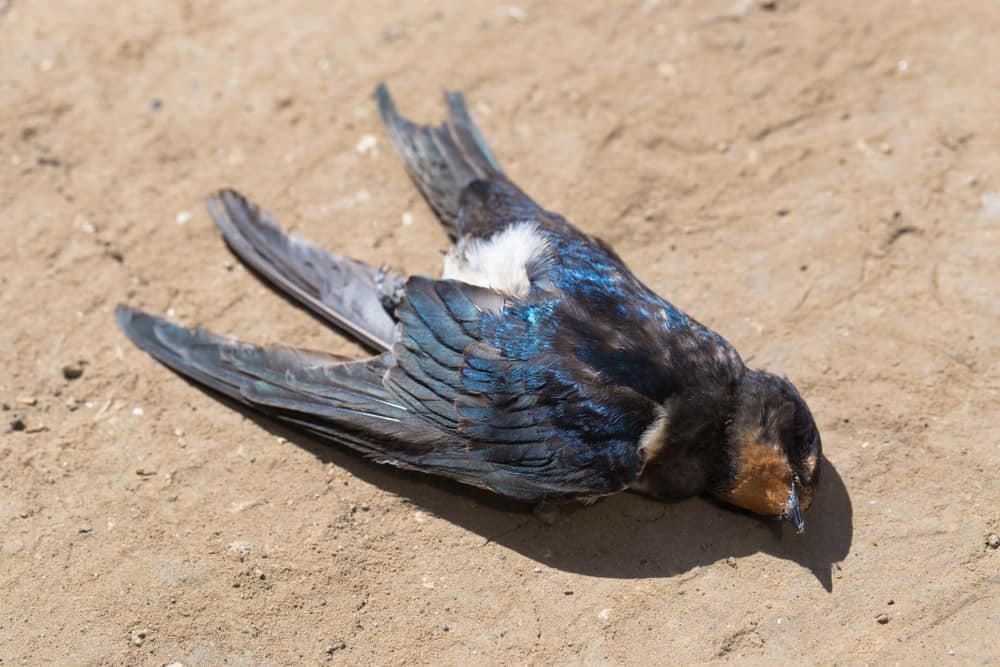 If you are like me, you probably have vivid dreams that affect you even after you wake up. When it is a pleasant dream, you almost feel sorry that you had to wake up. However, not every dream is pleasant, and dreaming of certain things can be disturbing.

For example, encountering a dead bird in a dream is an experience that leaves many people wondering whether it means something. There are several meanings behind these dreams, so if you dream of dead birds, keep reading to learn more about the dead bird symbolism!

They can also symbolize danger, sin, grief, infidelity, mistrust, and impurity, and they are generally considered to be a bad omen, as they represent regret, destruction, failure, grief, guilt, and old age.

What Does It Mean When You Dream About Dead Birds?

When you dream of a dead bird, the meaning of that dream may vary depending on its details. Such dreams can be warnings for you to do something.  For example, if you dream about a bird that’s dying, it might be a sign that you need to fix something quickly before you get into more trouble.

On the other hand, if you dream about the dead birds falling from the sky, this could mean you need to pay more attention to the important things in your life that you might be neglecting at the moment.

However, the meaning of dead birds in your dreams can be positive. For example, if you dream about a dead bird coming to life, such a dream carries a strong symbolism of rebirth, renewal, and a new beginning. This is a good sign, and it usually means that you need to give a second chance to someone.

If you dreamt about the dead bird in the cage, you probably feel trapped. Maybe you feel imprisoned by your obligations or old habits. This could also be a sign that you need to let go of a dead relationship.

Dreaming about a dead pet bird might mean you will lose something that’s dear to you. It can also mean that you need to enjoy little things in life and be happy with what you have, without worrying too much about the future.

Some people dream about dead birds in their mouths. It sounds scary, but in this context, a dead bird means that you aren’t speaking your mind freely and that you need to find a way to express your thoughts and feelings more openly.

If you dream about bird babies laying dead in their nest, you might feel lonely, unloved, underappreciated, and that no one cares about you. However, it might also mean that you will soon lose a friend or that a dear person will die.

Different bird species will carry different dream meanings. This applies to both alive and dead birds.

1. Dreaming About A Dead Pigeon

Dreams about pigeons were connected to the mysterious world of gods and magic since prehistoric times. It can be both bad and good omen, depending on the context, but in general, a dead pigeon dream often tells you that you are still living in the past, or that your future will be closely tied and affected by your past.

2. Dreaming About A Dead Eagle

Eagles are magnificent animals that symbolize power, wisdom, and wealth. Logically, dreaming about dead eagles signifies the loss of these characteristics. If you dream about someone killing an eagle, that is a sign of bad changes in your life.

However, if you dream about killing the eagle yourself, this can represent your ambition and willingness to succeed, even at a high cost. You are ruthless and you will do anything to reach your goal.

3. Dreaming About A Dead Swan

A dead swan in your dreams symbolizes disappointment. You have been waiting for something for a long time, but it won’t go as you expected. Or, you idolize and adore someone, but once you meet them more closely, you will regret it.

Dreaming about a dead swan can also mean you will lose someone who is dear to you, either through death or by simply going estranged.

4. Dreaming About A Dead Hummingbird

Dreaming about a dead hummingbird may also mean that you need to take some time to try to fully understand your feelings, desires, and possibilities in life.

5. Dreaming About A Dead Owl

Owls are nocturnal animals that are often connected to the underworld, darkness, and death, and dreaming about a dead owl is considered to be one of the darkest omens. However, dead owls will often represent an incoming change.

This change can signify the end of a friendship or relationship, a change in the workplace or career, and even moving to another place. Dead owls will also signify changes in your body, both good and bad.

Dreaming about a dead owl can also be a sign of anxiety. Something is bothering you and you need to find a way to deal with it.

6. Dreaming About A Dead Crow

Crows had a powerful mystical meaning since ancient times. Many cultures revered crows as messengers of death and change. Dreaming about dead crows means that you will soon face a major disappointment in yourself.

As such, this dream is here to warn you in time, so that you suffer less, or that you have enough time to try and change some things.

Also, if you dream about killing a crow, that means that you are suffering greatly and that your suffering is caused by your own actions. It is time to move on from the suffering and take the necessary steps to avoid similar situations in the future.

7. Dreaming About A Dead Hawk

Hawks are cunning animals that symbolize freedom, austerity, precision, and ambition. However, dreaming about dead hawks can have surprising meanings. For example, it can mean that you are scared of being close to someone.

It can also mean that you are depending on someone who is not telling you the whole truth. You are feeling overwhelmed, but you also have a chance for self-growth.

8. Dreaming About A Dead Canary

These dreams can have several meanings. The canaries symbolize beautiful things in life, and if you happen to dream about the dead ones, it might mean that good things are waiting for you, but you will be able to reach them only through self-growth, sacrifice, and hard work.

You will also need to find a way to heal from the pain and things that have hurt you. If you continue to delve into your past sorrows, you will be forever unhappy and you will never reach your full potential.

Different cultures have various interpretations when it comes to dead bird dreams. And here are three illustrations:

Ancient Greeks and Romans made prophecies based on bird flights and songs. Dead birds signified the end, loss, change, and death. Dreaming about a dead bird was a bad omen that was believed to predict the death of a dreamer or their dear ones.

In Homer’s Odyssey, Odysseys’ return was predicted by a vision of an eagle carrying a dead dove. The dead dove symbolized the death of Penelope’s suitors.

For Native Americans, having a dead bird dream wasn’t a bad thing. They believed that dead birds symbolized renewal, rebirth, transformation, change, and leaving old habits behind to become a better and more mature person.

It was also a symbol of everything that one needs to leave in the past to be able to move on and enjoy the present and the future.

In the Bible, birds are often messengers of God. Dreaming about dead birds is often seen as a symbol of disappointment and upcoming failure and trouble.

It can also be a message to stop doing something that’s morally wrong or simply bad for us. These dreams teach us to take a responsibility for our actions and to be prepared for hard times.

Although dreaming about dead birds might be upsetting and often carries some bad omens, it can also be a wake-up call or a piece of advice on how to act in certain situations.

Dreams with bad birds have many meanings: they warn you about loss, trouble, danger, failure, and bad luck. Still, these dreams can represent changes, new things, new chances, renewal, rebirth, and overall a different perspective on life.

Dead bird dream symbolism may also vary depending on the specific context or on the bird species, so it is important to take this into consideration when trying to decypher such dreams.

Have you ever dreamt about dead birds? Was it a scary experience, or it was enlightening? Share in the comments!