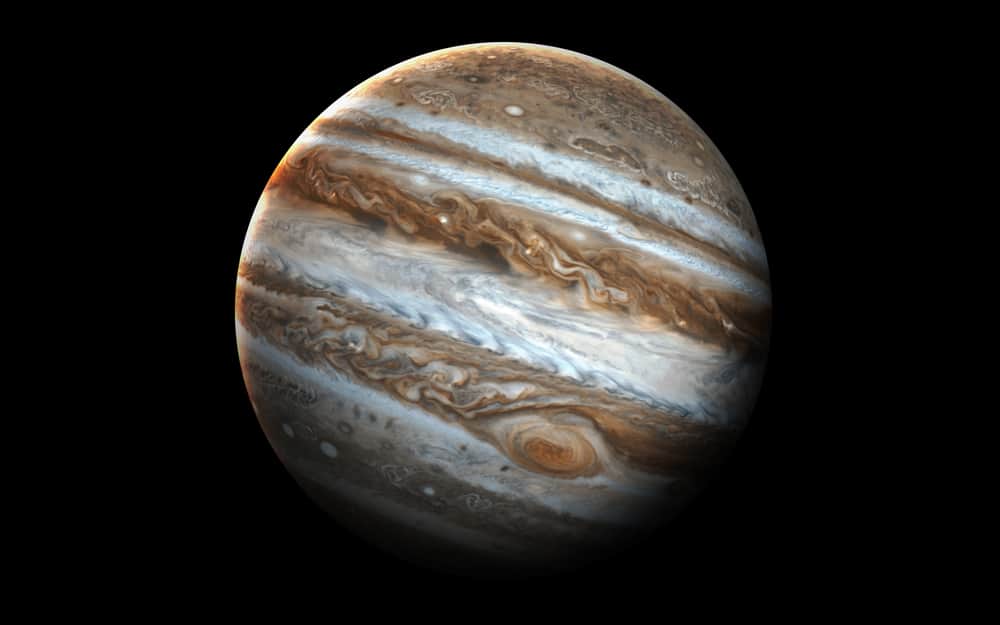 When I was little, we had nine planets, and Pluto was one of them. But things have changed a lot since then, and the science has evolved. We have new planetary photos from the Voyager, and we’ve acquired a lot more knowledge about celestial objects. Based on the information from satellites and telescopes, does Jupiter have a solid surface? No. Let’s find out more… 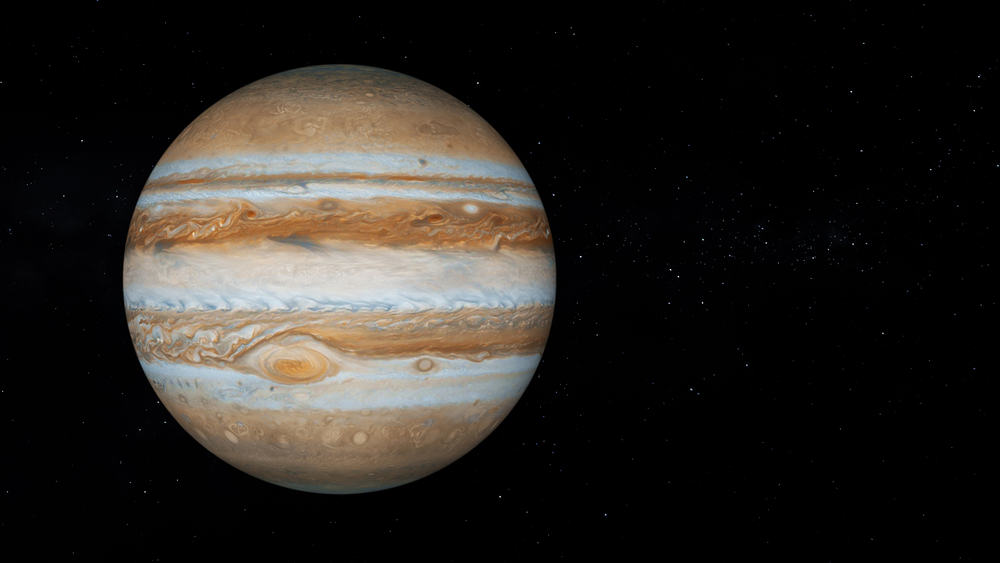 When you read about the planets in schoolbooks, you’ll learn that Mars is red, Earth is a blue marble, Saturn has rings, and Jupiter has stripes. You may also remember that Jupiter is the 5th planet from the sun (at least our sun), and is the largest planet. If you add the mass of all the other planets and double that figure, Jupiter is still way bigger. It’s known as a gas giant.

Earth’s atmosphere is made of nitrogen, oxygen, carbon dioxide, and trace gases. Jupiter’s atmosphere is made of helium and hydrogen, so we can’t live there. We wouldn’t be able to breathe! The planet also has extreme temperatures and pressures that are unlikely to sustain life as we know it. It has lots of moons though. Some of them have gentler living conditions.

At the moment, we know of 53 moons circling Jupiter, and 26 smaller ones with no names yet. The four biggest ones are called the Galilean satellites because Galileo Galilei first spotted them in 1610. Io is highly volcanic while Ganymede is bigger than planet Mercury, and is recorded as the biggest moon in our solar system. Callisto has small surface craters.

One of these moons – Europa – is said to have an icy crust with an ocean beneath it, so it could potentially have living organisms. But Jupiter itself has a radius of close to 70,000km (about 44,000 miles), meaning it’s 11 times as wide as Earth. And Jupiter’s atmosphere is icy because it’s so far from our sun. We measure these distances using astronomic units (AU).

Although the outer layers of Jupiter can reach -238°F, it gets hotter as you approach the core. The innermost parts of the planet are far too hot to handle. As you get closer to the center, some places can get hotter than the sun! Also, the layers below the atmosphere are liquid. You’d essentially be swimming in a scalding cauldron of electric ocean waves. Ouch!

The Math of Astronomic Units

The distance between us (Earth) and our sun counts as 1AU. Jupiter is 5.2AU from our sun. This means while it takes 7 minutes for the sun’s rays to reach us, it takes 43 for our sunlight to reach Jupiter. But size does matter. A day on Earth is 24 hours because that’s how long it takes for our planet to pirouette. Jupiter is bigger, and it only takes 10 hours to do a full turn.

As a result, Jupiter has the shortest days in our solar system – 5 daylight hours and 5 hours of darkness. But its orbit around the sun is larger as well. We take 365 ¼ days to go around this sun, and that’s how we mark a year. But Jupiter takes 4,333 Earth days, so one Jupiter year is roughly a dozen Earth years. Also, the Earth tilts at 23.5° but Jupiter’s angle is 3°.

Our seasons are based on the Earth’s angle from the sun. But because Jupiter is nearly vertical, the seasons there don’t vary as much as winter and summer. It’s a bit like living in the tropics since the weather is the same for most of the year. Also, unlike Saturn’s rings, the ones on Jupiter are faint – you only see them if our sun is at the right angle for backlighting.

To understand this, think of the difference between a star and a planet. Stars are made of gases that move fast enough to produce heat and light. But planets are objects that go around the sun. Jupiter may be made of gases, but it doesn’t emit its own light, and it orbits our sun. For the record, our sun is a star. Its heat and light give the energy that powers life on Earth.

So why doesn’t Jupiter shine like the sun if it’s made of the same materials? It didn’t grow big enough to burn! It may dwarf the other planets, but it’s only one-tenth of the sun’s size. Let’s talk about Jupiter’s surface or lack thereof. At the center of the Earth, there’s a mix of solid and molten rock, with our oceans and land roughly 1,800 miles above the central core.

As far as we know Jupiter doesn’t have a core like ours. It has a sort of ocean, but the ‘water’ on Jupiter is made of liquid hydrogen, while ours is H2O (hydrogen and oxygen). Based on scientific theories, the deepest parts of Jupiter’s hydrogen ocean might have a metal quality. We think the liquid hydrogen is as conductive as metal, reacting to heat and electric current.

Because Jupiter is so big and moves so fast, electricity flowing through the liquid might be what causes the planet’s gravity. Under that hydrogen fluid, it’s possible that Jupiter has a quartz-like core of silicate and iron. Because temperatures down there can reach 90,000°F, it could be soft solid or thick planetary soup. But if it exists, it’s way below the hydrogen ocean.

Even if there’s a solid surface somewhere on the planet, it’s covered by infinite miles of liquid metallic hydrogen (the part with electric currents) plus the liquid hydrogen ocean. So unlike Earth which has land, water, and air, Jupiter consists of hydrogen atoms in various states – gas, liquid, and ‘metal’. If you could look through the clouds, all you’d see is floating liquid.

Drops of Jupiter in Your Hair!

It may seem like a pretty concept to fly your spacecraft above that endless ocean. But you’d soon run out of fuel because there’s nowhere to land. And that’s if Jupiter’s atmosphere and pressure don’t vaporize you first. Also, while Jupiter’s rings are made of dust, its colorful clouds are three layers of ice crystals: ammonia, ammonium hydrosulphide, and H20 ice.

Now let’s talk about Jupiter’s stripes. What we see as distinct lines are probably waves of gases, mostly phosphorus, and sulfur. The clouds form stripey bands as well. We can see the layers because the gases and clouds form rows around the planet as it spins. Being an ocean planet, Jupiter experiences violent storms. Its famous Great Red Spot is an example.

We see it as a big red dot when we look through a telescope, but it’s a superstorm that has been raging for centuries! And because of Jupiter’s size, the whole Earth can fit inside that storm funnel. But it’s not a funnel storm as such – more of a massive oval cloud. A half-sized storm called the Little Red Spot is made of three smaller cloud clusters that merged into one.

Most of our information about Jupiter comes from the Juno Probe monitored by NASA. It left Earth on 5th August 2011 and reached Jupiter on 5th July 2016. It was expected to finish taking its readings in 2021, but the mission has been extended to 2025. Once it’s done, Juno will drop out of Jupiter’s orbit and likely self-destruct somewhere in the planet’s atmosphere.

Since it launched, Juno has stayed in orbit because it was outside Jupiter’s gravitational field. But the plan was always for Juno to get closer as part of its final descent. And right on schedule, Juno’s orbit has since shrunk from 53 days to 43 days. This means at first, Juno took 53 days to go around the planet. Now it can circle the whole of Jupiter in only 43 days.

As we said before, Jupiter’s cloud cover appears in the form of stripes or bands in red and off-white. These rows are separated by strong winds that can reach speeds of 2,000 miles. We call them the zones and belts of Jupiter. Also, because Jupiter ‘stands straight’ and has the slightest of tilts, its poles don’t move around too much. This causes consistent cycles.

The cycles – or polar cyclones – form distinct patterns that Juno has spotted. Jupiter’s north pole has a cluster of eight cyclones arranged in an octagon, while the five cyclones at the south pole are aligned to form a pentagon-like pattern. Jupiter’s magnetic field extends up to 2 million miles beyond the planet, with a tapered tadpole tail that just touches Saturn’s orbit.

Jupiter is one of the four Jovian planets. We class them together because they’re massive in comparison to Earth. The other three Jovian planets are Neptune, Saturn, and Uranus. And why is it so star-like? Scientists speculate that it was formed using most of the leftovers from our sun. If it had coagulated ten times more mass, it may have developed into a second sun!

We’ve learned a lot about Jupiter in this article, but you may still wonder – does Jupiter have a solid surface? From what we know so far, no, it doesn’t. It’s a star-like swirl of hydrogen and helium with no land to walk on. But until we can move through that electric metallic hydrogen liquid, we’ll never know for sure. For now, the consensus is Jupiter has no surface.

No comments to show.