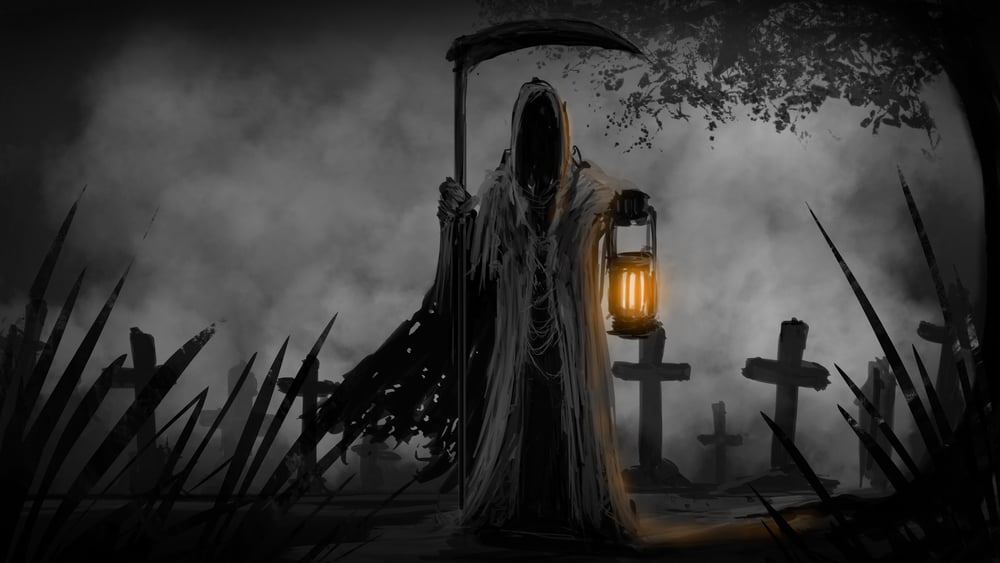 Whether you’re afraid of death or you think about it often, you may have dreams that involve the Grim Reaper. The Grim Reaper, otherwise known as Death, has been referenced across cultures for millennia.

While descriptions of him vary, he’s usually depicted as a skeletal figure who wears a long black robe and carries a scythe. So what does it mean if you have a dream about this figure?

Moreover, how do these dreams indicate how the dreamer is feeling? And what kinds of Grim Reaper dreams can a person have? For answers to all these questions, read through this article.

What Does Seeing the Grim Reaper in a Dream Say About How You’re Feeling?

Not only can seeing the Grim Reaper in a dream foretell events that may take place in your future, but these dreams can also indicate how you’re feeling in the here and now.

In essence, the emotions you’re feeling can cause this dream to manifest, and sometimes emotions you didn’t even know you were feeling can bring out these dreams because of your subconscious. There are many emotions associated with Grim Reaper dreams, but below are three common ones:

1. The feeling of Impending Doom

A feeling of impending doom can be described as a feeling which makes you believe the world is going to collapse at any second. You may feel this way because you’re unsure of the future.

In other words, you could think that the Grim Reaper will soon be coming to take you away. Nervousness, fear, and several other negative emotions can collectively lead to a feeling of impending doom.

Anxiety can be caused by a great many things. Perhaps you’re afraid of what’s to come or you doubt your abilities. The thing is, even minor anxiety can bring on a dream of the Grim Reaper. That’s just how anxiety goes: sometimes you can pinpoint its source and other times you’re just at its mercy.

Believe it or not, consistently feeling unmotivated is enough to bring on a Grim Reaper dream. In this case, it could be that you’re feeling Death is on its way to see you because you’ve lost the spark of life that makes others driven and cheery. You could also be experiencing depression if you feel this way.

If you deem that being unmotivated is what brought on this dream, you should respond by living life to the fullest every day.

What Kind of Grim Reaper Dreams Are There?

There is a wide range of Grim Reaper dreams, and the factors that distinguish these dreams play a large role in determining the dream’s meaning. Below, we address 9 common Grim Reaper dreams and the meanings behind them:

1. The Grim Reaper Comes to See You

If the Grim Reaper comes to see you in a dream, don’t immediately think that your time is coming to an end. In fact, this kind of dream is more so associated with manipulation.

That is, you may be having this dream because somebody in your life is manipulating you and you don’t know it. Or, somebody may be trying to tell you how to live your life and you consider this threatening. It’s the threatening nature that’s associated with the Grim Reaper (in this case).

2. The Grim Reaper Spares You

Dreaming that the Grim Reaper has decided to spare you could be a sign that you’re on the mend after a near-death experience or a bad illness. You may also be unrealistically nervous about your health condition, and this dream is your subconscious’s way of telling you there’s not much to worry about.

Therefore, if you have such a dream before a major operation, consider it a good sign.

3. You’re Not Afraid of the Grim Reaper

If you have a dream where you’re not afraid of the Grim Reaper, take this as a sign that you’re self-confident, motivated, and able to overcome most of the obstacles that life puts in front of you.

You may also be a natural leader. Therefore, in your mind, the Grim Reaper doesn’t lead you to death, rather he follows you as you lead yourself there on your terms.

4. You’re Afraid of the Grim Reaper

Dreaming that you’re afraid of the Grim Reaper—which is understandably how most people feel about this entity—could indicate that there’s still more for you to do in life. Or perhaps you’re worried that you’ll die on bad terms with those you care about.

If you have one of these dreams, it’s not a bad idea to show some appreciation to those you love. Moreover, appreciate every second you have moving forward.

5. You Welcome the Grim Reaper

Welcoming the Grim Reaper when you see him is a dream you may have in your older years. In this case, the dreamer greets Death as a friend—not as an enemy. This is because the dreamer sees Death as their way to the afterlife.

Again, if you’ve lived a fulfilling life, it’s likely you’ll have this positive dream (instead of one of the negative ones).

6. You’re Running From the Grim Reaper

Running from the Grim Reaper can mean that you’re trying to run away from the aging process. Perhaps you’re somebody who invests in cosmetic surgery to look younger. This dream can also symbolize that you aren’t ready to give up worldly attachments.

In any case, it’s important to recognize that you’ll never outrun the Grim Reaper. Instead, you must focus on making the most of the time you have, as you won’t have a chance to do that one day—no matter how much you run!

7. You See the Grim Reaper Come for a Stranger

This isn’t the most common Grim Reaper dream, but addressing it here may be beneficial to you. You may dream about the Grim Reaper coming for another person because you’re aware that you’re not living life to the fullest, but you’re not doing anything to change this.

However, you could also see them going with the Grim Reaper peacefully, and this could be a sign of encouragement that there’s no need to fear death. In the end, whether you fear it or welcome it, it’s coming.

8. You Kill the Grim Reaper

Killing the Grim Reaper in a dream is often associated with disdain for feeling like there’s no way out. If you’re trapped in a dead-end job or you’re in a relationship that isn’t providing you any enjoyment or value, you may have this dream.

Killing the Grim Reaper is obviously impossible, as Death comes for everybody. Therefore, having this dream doesn’t mean you want to kill Death literally, but that you want to embrace your independence and overcome the things that are holding you back.

9. You Dream Of Being the Grim Reaper

Dreaming that you are the Grim Reaper is a sign that you lack power currently and desire it. It could also show that you lack control and you believe that controlling others is a way to gain this. Similarly, you may have this dream because you’re vengeful and hurt, possibly because of a recent deception or betrayal.

If you’re the Grim Reaper and you’re going to claim a soul, it’s relevant if you know the person you’ve gone to claim. This could mean you have an unresolved issue with them. Moreover, you may think that unilateral action will fix the issue, but this is wrong.

10. What to Do After Having a Grim Reaper Dream

After you have a dream that involves the Grim Reaper, you should take a step back and consider why you had this dream. If you believe this dream was brought on because you do not feel fulfilled at present, take steps to change that in your everyday life.

Perhaps you volunteer or reach out to people you haven’t spoken to in a long time. If you have any sour relationships, you should mend fences so there’s no bad blood. Not only will doing these things make you feel better—but they may also cause the Grim Reaper’s dreams to cease.

(Of course, you may have Grim Reaper dreams later on in life, but hopefully, these will be the positive ones—where you accept death and look forward to transitioning to the afterlife.)

So the next time you have a dream about the Grim Reaper, don’t get alarmed right away. Instead, you should consult this guide so you have a better understanding of why these dreams happen.

Just remember: if you have an open mind and you believe that your subconscious is trying to tell you something, you may be able to draw positive takeaways from a Grim Reaper dream and improve your life afterward.