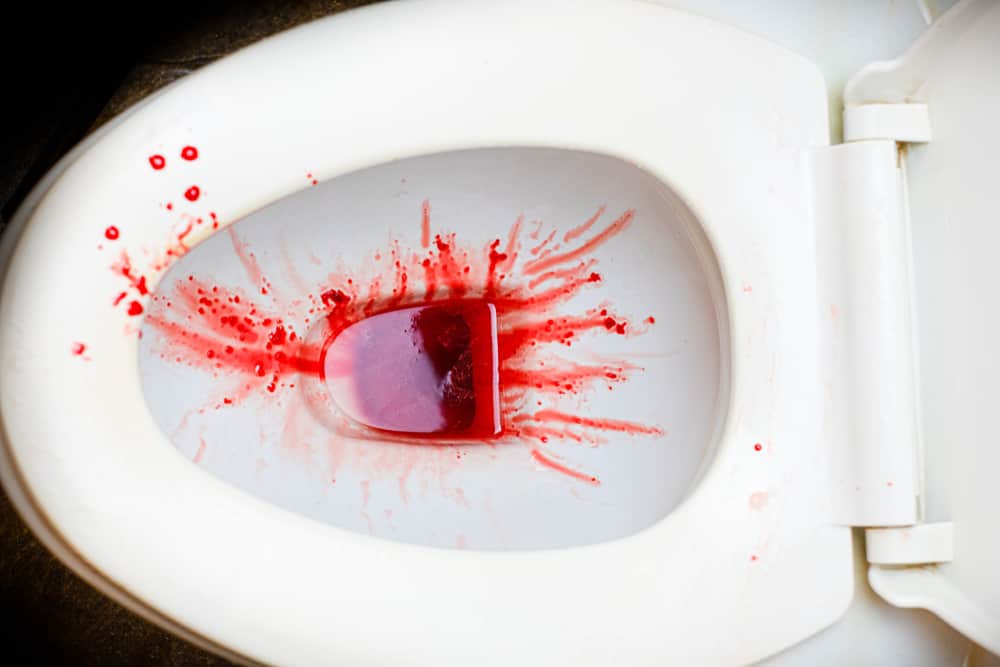 Urinating blood is definitely not the kind of dream you hope for before drifting off to sleep. In fact, to most who experience this dream, it’s no dream but a gruesome nightmare.

That being said, even though this kind of urine dream is unpleasant, it’s symbolic nonetheless. So if you’ve had this dream, or you want to know what this dream symbolizes before you do have it, this article is for you.

Below, we discuss the significance of urinating in dreams, and particular focus is put on urinating blood in dreams. There’s a lot to cover, so let’s get started!

Why Do People Dream About Urinating?

Urinating is a bodily function, and if we couldn’t do this we wouldn’t be able to survive. But what does it mean if you keep dreaming about urinating? Well, it could be that you need to release emotions, much like how a faucet releases water.

Or perhaps you’ve lost control in your personal or work life and you’re hoping for a new start. And according to dream interpretation books published in the 1930s, if you dream of urine it could mean a windfall is on the horizon.

What Does It Mean if You’re Urinating on Someone in a Dream?

If you’re urinating on somebody in a dream, this could be because you’re struggling with accepting authority in some part of your life. Perhaps you have a boss that you can’t communicate effectively with, or perhaps your spouse is domineering and doesn’t let you be yourself.

But this kind of dream isn’t solely about power dynamics, as it could mean you’re longing for attention, comfort, and love. It’s understandable why ”thoughtfulness” and “caring” are two words most people wouldn’t automatically associate with urinating, but this is what the dream experts say.

What Does It Mean if Someone Is Urinating on You in a Dream?

Being urinated on in a dream is seen as unpleasant by most people who experience this. Moreover, this can indicate that you’re not in control of your personal life and you’re lacking the resources and capacity to solve the problems you’re facing.

It could also mean you are suppressing emotions while feeling a lot of self-loathing and blame. You could also know you’re being taken advantage of, but you purposely won’t do anything because you’re afraid of the repercussions.

There are certainly power dynamics at work in such a dream, and in a way, such dreams resemble two dogs fighting over territory with their urine. If you know the person who is urinating on you, this information will go a long way in explaining what those power dynamics are.

For example, if it’s your boss who’s urinating on you in the dream world, this could underscore that there’s an unresolved issue between the two of you that needs to be addressed. It’s also important to point out that the significance of this kind of pee dream has a lot to do with the sex of the person urinating:

If a man is releasing pee and other bodily fluids on you in a dream, this could be a sign that you need to get more in touch with your masculine side and embrace vitality, whether you’re a male or female.

Surprisingly, this dream could also mean that a male figure in your life is about to help you solve a dilemma. And if you’re a male who’s being peed on by a male, especially if it’s a male who’s older than you, this could be a sign that you’re ready to seize power and change the existing leadership structure.

If a single woman is the one peeing on you, this could mean you are sexually frustrated, especially if you’re a man. Such a dream may also signify you’re lacking female attention in your life, or it may be time to get more in touch with your feminine side.

And if you’re a woman, this dream state could reveal that you’re about to be overwhelmed by emotions. You may also find yourself consoling another woman—someone close to you who’s just gone through a breakup or a significant loss.

What Does Dreaming About Bloody Urine Signify?

If dreaming about urine wasn’t uncomfortable enough, now we’re going to add blood to the mix, and doing so not only makes things more graphic but also more symbolic.

Both men and women can dream about urinating blood, though women tend to dream of this more than men, most likely because they menstruate, give birth, etc. Here’s more on what peeing blood in a dream can signify:

And if you have such a dream while trying to get pregnant, it shouldn’t discourage you from trying further. The spiritual meaning behind this dream could be that you’re nervous about this transition to a new part of life, but it’s totally natural. In fact, you should receive praise for making it!

2. Pain Is on the Horizon

Urinating blood in a dream could also signify that pain is on the horizon. Perhaps you’re going to go through loss or a kind of physical pain, like that caused by inflammation, a kidney stone, or a urinary tract infection. The good thing is that afterward, you will be better from the experience.

3. Your Passion for Life Is Weakening

Especially for women, dreaming of urinating blood may mean that your passion for life is weakening. When the blood is pumping steadily and vigorously, it’s a sign of passion for life. Therefore, losing a lot of blood symbolizes a loss of that passion.

4. You May Have to Sacrifice

Urinating blood may also symbolize that in the near future you’re going to have to make a significant sacrifice, and you probably won’t get an appreciation for this.

But shedding your own blood to help a close friend, for example, is an unmistakable sign of strength, passion, and love, and this dream of urine, while graphic initially, should be viewed as installer confidence and pride.

What Does It Mean if You Dream Of Blood-Stained Sheets?

And if you’re a pregnant woman who dreams about waking up in your own blood, it’s understandable if your first thought is that a traumatic experience may be around the corner. But in all likelihood probably isn’t the case!

What Does Dreaming About an Overflowing Toilet Represent?

Dreaming about an overflowing toilet in a restroom can mean that you are overwhelmed in life and there’s too much for you to process at the moment. You may also be feeling a lot of emotions at once, and you don’t know how to piece everything together.

Your first inclination may be to flush the toilet, especially if it’s filled with your own urine, so you can get a fresh start, but this may not be possible in such a dream. Such could represent a real-life ego problem or another kind of self-image disorder.

Why Do People Urinate in Strange Places in Dreams?

In dreams, people sometimes urinate in strange places. You may see somebody release urine in public or in a receptacle that’s not meant for disposing of urine. You could also dream about urinating in a dirty toilet, which may indicate that you’re not happy with where you are in life.

If such a dream puts the spotlight on repressed feelings, you should pay attention to these and deal with the problem so a lasting resolution can be reached.

What Does It Mean if You Smell Urine in a Dream?

Smelling urine in a dream could signify that something (or someone) important in your life isn’t what it appears to be. You could be getting deceived, perhaps by your spouse or your child. Think of the phrase: “Something smells fishy!”

Urinating blood is the stuff of nightmares—not dreams. But just because this kind of dream is unpleasant doesn’t mean you should ignore it. In fact, you should do the opposite. You should dig deep to understand what in your life is causing you to have such a dream.

Perhaps you’ve become overloaded with negative emotions and you need a release, or maybe you’re desperate for a rebirth so you can start life anew. In any case, if you have one of these dreams, you should not ignore it.

One of these dreams could be a warning sign, and while women mainly have these dreams, this doesn’t mean men should ignore the symbolism if they start urinating blood in a dream.