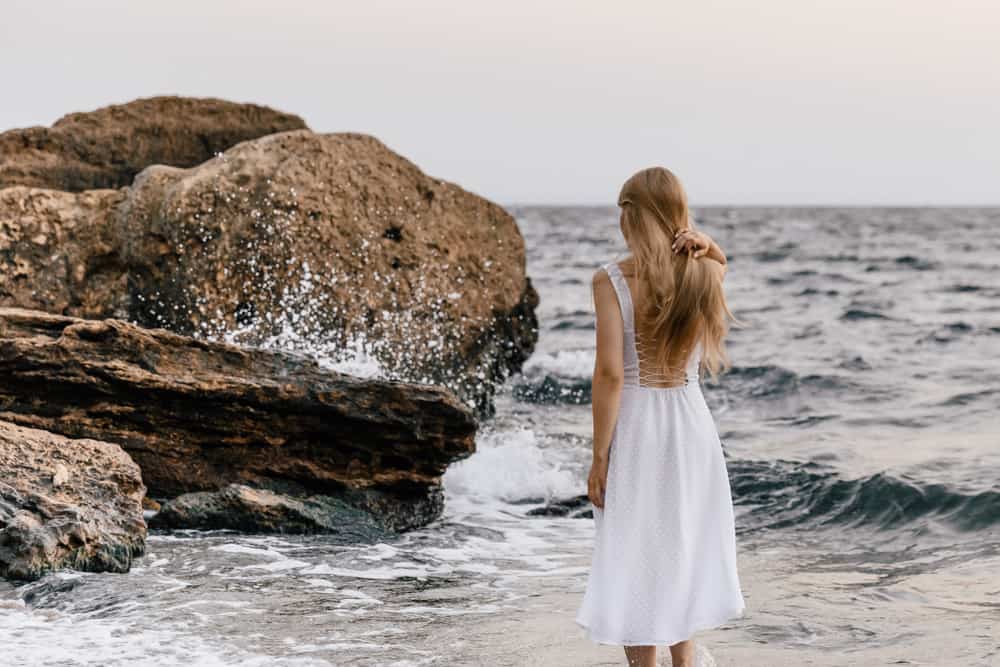 A lady in a white dress is something we’ve all seen before in the real world, but what’s the significance of seeing such a sight in the dream world? Both males and females can dream of a woman in a white dress, and for a long time, human beings have associated such a dream with deep spiritual meaning.

To know more about this dream interpretation and what seeing a white dress in a dream could mean for you while you’re awake, read through this article.

Why Is a White Dress Significant in a Dream?

Throughout the world, there are individuals who believe that dreaming of a woman in a white dress is symbolic, and this belief transcends cultural and religious lines.

White is often associated with purity and innocence. It’s also closely associated with the innocence of children. Therefore, if you see a little girl in a white dress in a dream, this could be a sign to embrace your inner child.

And for a woman specifically, this kind of dream can be especially important, as it could mean you’ve forgotten the dreams you had as a child and it’s time to start pursuing these.

Honesty is also symbolized by the color white. Therefore, if a woman in a white dress appears in your dream, this could be an indication that you need to be honest with yourself.

Additionally, if you’re pursuing the woman yet you can’t catch up, this could mean you’re not being honest with yourself and you don’t even know it.

Peace and harmony both go hand in hand with the color white, and this has been the case for millennia. So if you see someone waving a white flag in your dreams, this could mean that a drawn-out argument you’ve been having with somebody in your life is about to end.

Clarity too is associated with the color white. If you’ve been feeling a mental block recently and a woman in white appears in your dream, this could be a sign that you’ll finally have answers to questions that you’ve been asking for a long time.

Specially if the woman is surrounded by darkness, and her presence is illuminated by sunshine or a heavenly light, you may be on the verge of a breakthrough. And if a woman in white is leading you towards a certain goal in your dream, she may be telling you it’s time to pursue that goal in real life.

A woman in white making an appearance in your dream could also represent divinity. She could be an angel, whether she has wings or not.

Furthermore, since white is associated with purity and harmony in many religions, if you’re a religious person you should view such a dream as communication with a higher power.

What Does It Mean if You’re Wearing a White Dress in a Dream?

Dreaming of a white dress could mean you’re finally ready to fully embrace your creative side. This could also mean that you’ve gotten a good grip on your emotions. Perhaps you’ve overcome obstacles and now you feel less inhibited.

And if you’re a lady, dreaming of being in white could mean you’re thinking about marriage or confirmation.

If you’re wearing a white dress in a dream, and you’re engaged, it could be that you’re getting insight into how your wedding will transpire. For example, if in the dream the wedding goes poorly, this could be a bad omen that indicates your wedding may really turn out to be a nightmare.

And if you aren’t engaged, but you have a significant other, this could indicate that an engagement is around the corner. In a dream world, being in a white dress is usually accompanied by hearing wedding bells and seeing other wedding-related symbols.

When a young lady is confirmed into the Catholic Church, she wears white. If you’re about to take this step in life, this may be why you’re dreaming of yourself in a white robe. You could also be having issues with your faith, or it may be that you’re longing to get in touch with your spiritual side.

Wearing a white dress to the prom is certainly a bold statement. So if you dream of this, it could be that you’re craving attention. Just remember that such a move will bring frustration as well as admiration, and female friends may critique your choice of dress color.

But if you’re a young woman who’s struggling with feeling confident, you should embrace the spiritual meaning behind this kind of dream, as you may tap into a well of confidence sooner rather than later.

What Does It Mean if You Dream Of Someone Else in a White Dress?

Seeing somebody else in a white dress in a dream can be significant, especially if you know the person. Moreover, who it is may determine the meaning of the dream. You could see a spouse, your daughter, or a young woman you don’t even know.

If you see your partner in a white dress, this could be a sign that you need to rekindle the love you two had when you just got married. It may also be a sign that you should renew your vows. Additionally, you may be trying to start a new chapter with your spouse, and having this dream should encourage you to pursue that fully.

Seeing your mother in a white dress could indicate that you should reach out to her. And if you see this midst a fight with your mom, it could mean you’re overlooking the big picture for something trivial.

This dream is likely telling you that you should remember all your mother has done for you over the years, and you should show appreciation for her numerous sacrifices.

Seeing your daughter in a wedding dress could mean that you are not ready to see her transition into adulthood. And if you see them at their wedding, this is an even stronger sign that you’re struggling with the transition. This dream could also serve as a reminder to protect their innocence and support them in any way possible.

If you see a stranger in a white dress, this could mean a new love will soon come into your life. This is especially true if you’re single when this dream occurs. This dream can also signify that you’re healing after a bad relationship.

What Does It Mean if You’re Wearing White at a Funeral in a Dream?

Wearing a white dress at a funeral is in most cases taboo, and dreaming of this could indicate that you’re going to do something outlandish in the future. Seeing somebody in a white dress at a funeral could also be interpreted as a sign of rebirth, and if you’ve lost somebody recently this dream could be that person’s way of communicating with you.

What Does It Mean if You See a Lady in White Midst a Battle?

Seeing a woman in a white dress midst a fierce battle is a sign that a conflict you’re currently engaged in will soon resolve itself. This can also be a wake-up call, one which signals it’s time to prioritize seeking harmony over engaging in conflict.

If the woman is far from the battle, it may mean you’re not focusing on the big picture. And if she walks right through the fray, this could mean that your conflict will resolve peacefully.

Is Seeing a Slain Bride in a Dream a Bad Omen?

While dreaming about a woman in a white dress isn’t the most common dream, it’s one that often represents moral purity. It could also be a sign that the dreamer has worthwhile goals to pursue. And if spiritual growth is what you’re after, such a dream could be a messenger, signaling good news is coming.

In the end, it’s better to see a lady in a white dress as opposed to a lady in a black dress, as the latter is usually a bad sign, one closely associated with sad news and despair.