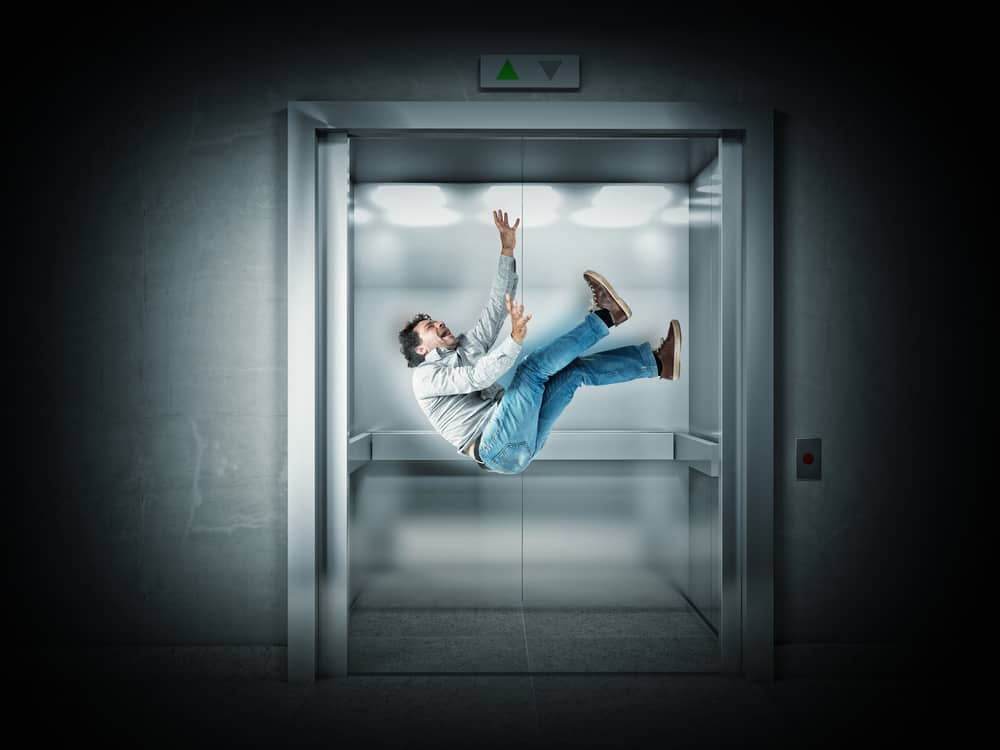 The first elevator was invented in 1853, and ever since then, human beings have been using these machines to make buildings more accessible. But we’ve all heard of those nightmarish scenarios where people unexpectedly get locked in an elevator and even worse are the stories of an elevator falling with people inside.

If you have a dream about such an event—that is an elevator falling—such could say a lot about how you’re feeling (depending on what factors are in the dream). These dreams are the focus of this article, so read on if you’ve had one recently or you believe you’ll have one soon.

What a Falling Elevator Dream Says About How You’re Feeling

When you dream about an elevator falling, you could be having this dream because your subconscious is trying to tell you something. A range of emotions can also bring on these dreams, which is why having them can indicate how you’re feeling, even if you don’t recognize that you’re feeling this way right away.

Some of the common feelings associated with these dreams are:

You could be feeling a sense of uneasiness. Perhaps you feel like you’re in limbo and you don’t know which direction to take your life. You may also have a clouded mind, and therefore you’re unable to make a plan.

Are you worried about things that you shouldn’t be worrying about? This attention to frivolous matters could be causing you to waste precious time, and the elevator dream is your acknowledgment of this.

If you’ve been approaching people and events with more skepticism lately, you could have dreams about elevators falling. Think about when you get in an elevator and it starts creaking, vibrating, and making loud noises. Even if it has a valid inspection sticker, it’s likely you’re still going to be skeptical of its reliability.

Remember that it’s good to go through life with a certain degree of skepticism, but at a certain point, you need to be more trusting.

Falling elevator dreams are also common for people who’ve been deceived recently. You get in an elevator and think that it’s working properly, then all of a sudden the cable snaps and you plunge hundreds of stories in mere seconds—there’s really no greater deception than that.

The thing about deception is that it makes you second-guess so much afterward. Elevators are supposed to be reliable, and nothing ever goes wrong with them—so we’re told. Therefore, if you’ve been badly deceived recently, it may even be hard for you to trust something as mundane as an elevator.

Are you feeling nervous? Are you unsure of what’s coming down the pike? You may dream of a falling elevator then. After all, sometimes in an elevator, things happen that can make you doubt how safe the elevator is, but in most cases, this is just fear getting a hold of you.

Therefore, if you’re dreaming of such a scenario, it’s likely something major is making you nervous, and it would be best to face this rather than avoid it.

What Factors Are Significant in a Falling Elevator Dream?

In a falling elevator dream, a variety of factors will be significant. The location, the age of the elevator, the kind of elevator, who is in the elevator, the time of day the event happens, and what you hear will collectively determine the dream’s meaning and give you an idea regarding what brought the dream on.

What Kinds of Falling Elevator Dreams Are There?

Your dreams may include several of the elements discussed below, and if this is the case you’ll need to understand the meaning of each element and consider how they relate to determining the meaning of the dream.

The elevator falling rapidly could indicate that an obstacle is going to pop up suddenly in the near future suddenly. For this reason, this kind of dream is viewed as a bad omen. You could also be having this dream because you feel like somebody is going to betray you and you don’t know how that will affect your life.

The reason why this dream is more significant than a dream about an elevator falling slowly is that you know you’re not going to be able to stop a fast-moving elevator car until there’s an impact. In other words, you’re going to have to hit the obstacle before you can even think about overcoming it.

2. Falling Down an Elevator Shaft

In real life, the people who fall down elevator shafts are mostly elevator maintenance workers. Falling down a shaft could indicate that you’re worried about being alone, and more importantly, dying alone.

Think about it: if you were to fall to your death in a shaft, it’s likely this wouldn’t be noticed, possibly for days, as it’s so dark and this area is rarely accessed.

3. Getting Injured by a Falling Elevator

Getting injured after an elevator crash could be a sign that you lack control of your life. Perhaps you are too trusting or you hand over authority to people who shouldn’t have it. But the important thing is that you survive, which means mistakes you make later on won’t spell your demise.

4. Being in a Falling Elevator Alone

Being in a falling elevator by yourself could indicate that you’re feeling trapped, possibly by existing relationships or your job. You may also feel constrained by family.

The significance of being alone is that you have nobody to support you in this frightening situation. Maybe after having this dream, you reach out to your main friends and some relatives to make sure you have people in your corner.

5. Being in a Falling Elevator With Strangers

Being in a falling elevator with strangers is significant as well. This could signify that you are naturally inclined to doubt and be skeptical of others. It may also show that you don’t believe strangers would pull together and help each other in a desperate hour.

Being in such a frightening situation with strangers could also be a sign that you don’t really know your friends, so you doubt they would come to your aid in a trying time.

6. Elevator Crashes Through the Floor

You may ride the elevator all the way down to the center of the earth or to your visualization of Hell. In this case, the elevator should be viewed as a means of transport, and if it’s descending so rapidly that it crashes through the earth, this could be a sign that you’re rapidly heading down the wrong path.

7. Stepping Into an Elevator With No Floor

Stepping into an elevator with no floor is a common dream for those who are struggling with trusting people. Think of how many times you use an elevator in a year—do you ever think that when you step in the floor is going to fall out from under you? The floor is there is just something that’s expected.

Therefore, when you don’t get something that should be there for you in a dream, it could indicate that you’re questioning things you once held to be fact. It could also mean that you’re aimless and getting warier with each step you take.

Old elevators are more likely to fail and fall, but this doesn’t mean new elevators can’t fail and fall. That being said, if you dream of being in an old elevator and it falls, this could indicate that you need to shun old habits and beliefs to pursue a better lifestyle.

Think of the elevator’s failing technology as your ideas being challenged; either you adapt with the times or fall to the wayside.

9. You Hear the Elevator Cable Snap

Hearing the elevator cable snap in a dream could be a sign that you are anxious and constantly thinking that the next moment is going to be your last. You know that when you hear the snap, it’s highly likely your demise is soon to follow. But you could be waiting for something that never comes.

Hearing the snap in the dream, and not hearing it in real life, shows that you are spending too much time worrying and not enough time being realistic.

10. You’re the Lone Survivor of an Elevator Crash

If an elevator falls and crashes in your dream, and you’re the lone survivor, this could indicate that you’re a leader who’s self-reliant. This could also show you’re trusting, and that your faith often leads others in the right direction.

In the end, you can have a lot of dreams where an elevator is falling. The important thing is that you pay attention to the factors in the dream, as this way you can interpret it and use its meaning to positively impact your life.