Skip to content
Liquids and Solids » Dream of House On Fire? (11 Spiritual Meanings) 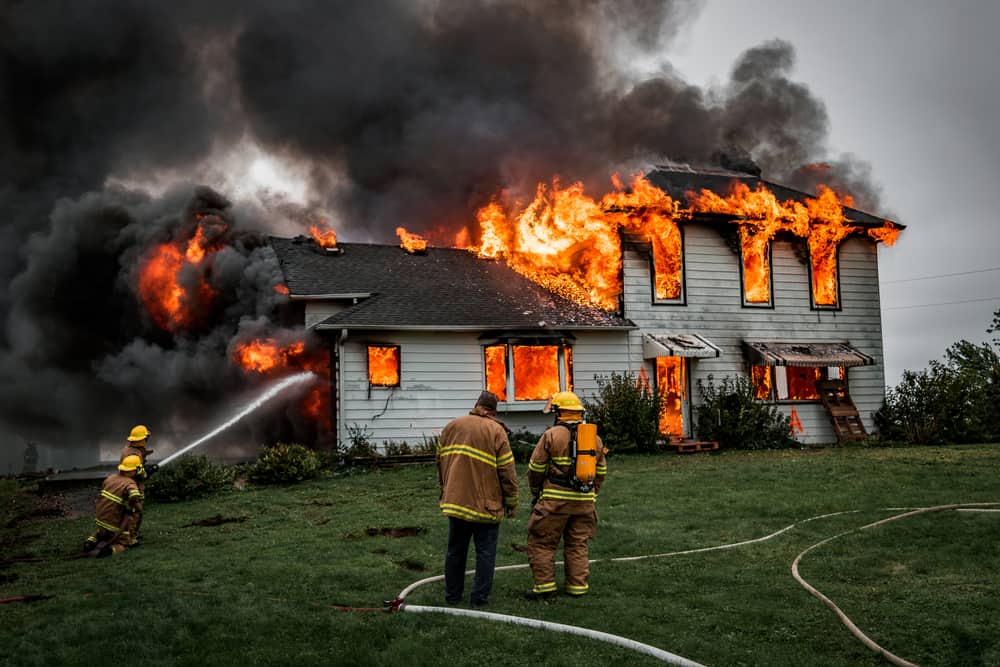 Whether you’ve been through a house fire in real life or not, you may have dreams about these. So why do people have these dreams, and what kind of house fire dreams are there?

These are the two main questions answered in this article. We also provide other useful information so you can better understand house fire dreams when you wake up. There’s a lot to cover, so let’s begin!

Why Do People Dream About Houses Burning Down?

Generally speaking, a dream of a house burning down is not always a bad omen. It could be a symbol of rebirth, in which case this would be a good omen. More often than not, however, dreams of fire are associated with negative aspects like destruction, despair, violence, and chaos.

And the thing about a house fire is that homes are filled with personal effects that are invaluable, so when these are destroyed along with the home it’s a major loss.

There is a range of house fire dreams, and the meaning of a dream is largely determined by the elements in it—but more on this is in the section below.

What Are Some Examples of House Fire Dreams?

There are many kinds of house fire dreams, but we discuss the common ones in the preceding sections. Your dream may incorporate a variety of the elements described below, in which case you’ll have to consider the meanings of all elements collectively to determine the overall meaning of the dream.

1. Seeing an Occupied House Burning Down

Seeing an occupied house burn down in a dream could be a sign that you’re feeling trapped. Perhaps you’re in a harmful situation that you can’t seem to break yourself out of. The thing that makes it so much more devastating is that you know your demise is likely to come from this harmful situation, and you can’t do anything to free yourself from that reality.

Seeing a family trapped in a house that’s on fire could be an indication that your inability to break yourself from a harmful situation is harming those you love as well.

2. Seeing an Empty House Burning Down

Have you seen an empty house burning down in a dream? This dream may be an indication that you need to be more self-reliant. You may go through something arduous down the road, probably sooner rather than later.

But if you have self-confidence and don’t give up when things seem bleak, you will overcome the odds. This dream could also signify that relationships that aren’t providing you any value or happiness will soon fade away.

Watching an old house burn down in a dream may be a sign from your subconscious, one which says you must shun old habits and old ways of thinking to pursue something new. People who struggle with an addiction are more likely to have this kind of dream.

The old, dilapidated house represents the habits and beliefs you need to get rid of, and the house burning down demonstrates that you’re putting your best foot forward and starting life over again.

In fact, in some folklore, dreams of an old house burning down are cause for celebration, as this is a sign that the person who had the dream has embarked on a new chapter in life.

4. Seeing a New House Burning Down

What’s the significance of watching a new house burn down in a dream? Unfortunately, this is a bad omen that indicates new plans are either going to fall through or result in a negative outcome—the opposite of what you’re expecting.

It could also symbolize that you’ve gotten ahead of yourself and that you need to rethink things before taking another step forward. Moreover, the house being new won’t be the only important factor. Do you own this new house or is it owned by somebody else? In the latter case, the dream may reveal a hidden dislike for extravagant material possessions.

5. Seeing Your Neighbor’s House Burn Down

Is your neighbor’s house the one that’s on fire in the dream? This is associated with excessive risk-taking. It’s also a sign that something is going to go wrong in the near future, mainly because you’re ignoring something that requires your attention now.

It could also be that you’ve spotted a problem with somebody else’s life and you haven’t taken the time to warn them. This could, as a consequence of inaction, affect your life negatively.

Which neighbor also happens to be significant. Perhaps you loathe this neighbor and you subconsciously wish for something bad to happen that forces them to move.

6. Seeing Your Friend/Relative’s House Burn Down

Seeing a friend or loved one’s home burn down in a dream could be a sign that you have unresolved issues with the person whose home is burning down. It could also be an indication that there are things unsaid between the two of you that need to be let out so your relationship can flourish.

If you’re dreaming about your parents’ home burning down, this could mean that you’re embracing adulthood and shedding your childish ways. But others say this is a sign that bad things are going to happen, and not necessarily to your parents but to someone, you’re related to by blood.

7. Seeing Your Childhood Home on Fire

Witnessing your childhood home burn down in a dream could be a sign that you need to shed childish behaviors and ways of thinking. And if you’re in the home while it’s burning—specifically if you’re in your childhood bedroom—this could indicate that you are questioning fond memories you once had.

These dreams are often had by individuals who did not have the best childhood, and in many cases, they’re associated with trauma.

8. Seeing Your Dream Home on Fire

Had a dream about your dream home going up in a blaze suddenly? Well, this could mean that you’re being too idealistic and not realistic when you envision your future. You could also be wasting time on things that aren’t going to yield positive results.

You may also have a self-inflated image of yourself, and this could be your downfall later on. You may need to reconsider what you prioritize and value in life after having this dream.

What Does It Mean When You Put Out a Fire in a Dream?

Not all house fire dreams are bad. You could actually have one where you put out the fire. This could be an indication that you’re going to step up in a trying situation and help bring a positive result. You may protect innocent people or stand up for somebody who has no voice.

Putting out a blaze is no easy task. Especially if you’re able to do this on your own, it could be a sign that you’re going to overcome a big hurdle, even in the face of many people doubting you; some may even try to inhibit you.

And if you’re a firefighter in a dream, and others are helping you put out the fire, take this as a sign that you’ll need all the help you can get to achieve your goals later on.

What Does It Mean When You Escape a House Fire in a Dream?

If you managed to escape the house fire in your dream, don’t ignore this aspect. In fact, you should take this as an indication that in the future you’re going to survive a dangerous situation, but perhaps narrowly.

Additionally, if you have to go through a lot of burning debris—and you can visualize the blaze and almost feel the smoke being inhaled—this may be a sign that you’re aware of a crippling disease, but you won’t know for sure unless you face your fears and consult an expert.

What Does It Mean When You See a Whole Neighborhood on Fire in a Dream?

Witnessing a whole neighborhood on fire in a dream is more like a nightmare. It doesn’t have to be your neighborhood—it could be any neighborhood. This dream is associated with desolation, chaos, and madness. It could also be a sign that your community is going down the wrong way and you feel like you can’t do anything to change this.

If you have this dream, perhaps you should take more interest in your local community. Especially if the fires are arson-related, this could be a sign that you worry about your safety and the value of your property.

So the next time you have a dream about a house burning down, you should pay attention to the specific factors in this dream so you can accurately interpret its meaning and proceed accordingly.

Keep in mind that your subconscious is probably trying to send you a message by presenting this dream. Moreover, it’s likely you’re entering a new chapter and shedding old ways when you have this dream, so understanding it will help you transition.