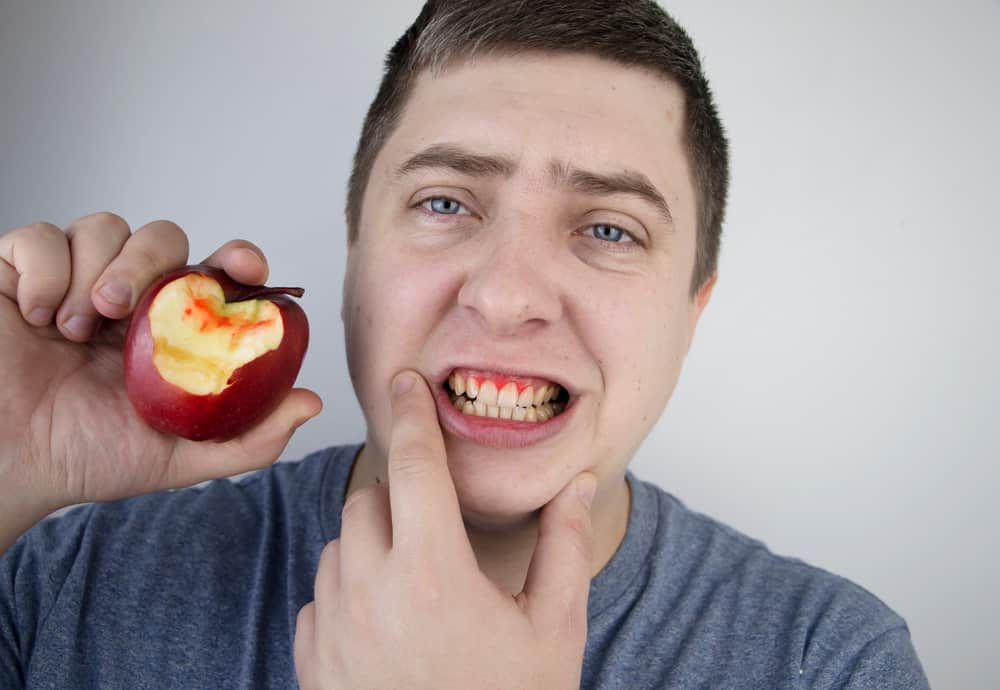 Dreaming of a bleeding mouth can leave you feeling disturbed, worried, and unsettled. Noticing that you’re injured is bad enough, but add the taste of blood to the mix and you can almost classify this dream as a nightmare.

To interpret your bleeding mouth dream, you can look for a common theme and plot which resonates with your waking life. Many of these dreams, for example, point to a repetitive problem in your life or foreshadow a serious problem.

Let’s dive into the most common themes and plots for mouth-bleeding dreams so that you, dear reader, can reach the most accurate interpretation of your life.

A dream’s theme is a part of your waking life that is reflected within your subconscious mind. Themes are often issues, premonitions, or fears we have in waking life that we either ignore or are never aware of in the first place. These feelings are hidden away in our subconscious, where they manifest as dreams, nightmares, or automatic responses to certain triggers.

The most common themes for dreams about a mouth bleeding are about a repetitive issue in your waking life, foreshadowing a future issue, or the dreamer losing control.

1. You Are Repeating a Problem

If you have blood in your mouth from a cut, injury, or unknown source, this dream could represent a repetitive problem in your life. This type of problem is self-created, and your discovery of it as blood within the dream will make you feel disgusted or even nauseous.

Repetitive problems could be anything that you keep doing even though you know it’s wrong or hurts others. For example, if you are constantly selfish with the people close to you but continue to be egoistic, this would be a repeating problem.

These types of blood dreams have a consistent, small flow of blood from your mouth. It is not drastic or dangerous, but bothersome enough to preoccupy you. This is your subconscious guilt rising and demanding attention.

It’s time to make amends for your sin and correct your bad habits.

If instead, you dream of a profuse amount of blood from your mouth or face, this foreshadows a much bigger problem in your waking life. Something impactful and potentially dangerous is on the horizon, and it’s in your best interest to be prepared for whatever it is.

If the blood comes as vomit or you struggle to stop the bleeding, be wary of your health. Alternatively, if it comes from another person and you try to help them to no avail, that other person may be in harm’s way or your relationship with them could be in jeopardy.

Keep your plans low-key and don’t make any big decisions in the coming weeks. Prioritize your physical and mental health along with those closest to you and save your strength for the battle ahead.

3. You Are Losing Control

The final common theme in mouth bleeding dreams is a sense of losing control. You may resonate with this theme if your dream was especially chaotic and emotional – especially if you awoke feeling confused, frustrated, and panicked.

Perhaps the bleeding wouldn’t cease and you were at a loss for what to do or you felt that death was imminent and no one could help. This resonates with a feeling of helplessness in your waking life.

While you may not feel that life is totally out of control, you might have been thrown a curveball that uprooted your life, like a scandal, health scare, natural disaster, business loss, or a move into poverty. It’s normal to feel out of control, but it’s also essential to deal with feelings of helplessness before they become overwhelming.

Every dream is unique, but some plots repeat across cultures and people. If one of these plots sounds familiar to you, you can further explore your dream’s interpretation and meaning.

1. Your Mouth Is Bleeding

A simple bleeding mouth points to a problem you need to deal with in your waking life. You might be aware of this problem or be playing naïve, but it is only growing in the shadows and limiting your growth.

Examples of these problems include bad habits like smoking, addictions, taking advantage of others, or general laziness and lack of effort. Much like a constant bleed or sore, this issue will linger until properly dealt with, and the time has come to open your eyes and face the problem within you.

2. Someone Else’s Mouth Is Bleeding

If you see someone else’s mouth bleeding in your dream, you are worried about that person. You may have had a gut feeling that something was wrong with them in your waking life or perhaps a rift has grown between you both, causing some tension.

Anyone you worry about is someone you care for, so it is worth trying to save the friendship. If you believe your friendship is well-off and your friend is doing ok, your consciousness may be a forewarning that your friend’s livelihood is at stake. Make sure they are making the correct decisions and not endangering their future for worldly gains.

3. You Stop the Bleeding

A positive twist on these dark plots is if you manage to stop the bleeding in your dream through pressure or medicine, or it stops on its own. Whether it’s your own bleeding or someone else’s, this is a success that points to a celebration in your real future.

Something good is coming your way, so trust in your ideas and reflect on your spiritual attitudes in the meantime. This is an optimal time for the pious person, as you’ll reap greater benefits than an impious person during the coming weeks. Continue to respect your superiors, share good words with those around you, and stick to a healthy schedule until your blessing appears.

Spitting up blood, vomiting blood, or spewing blood is a sign of distress. As a part of a dream, this act is a messenger for evil things to come.

If you are a man who finds that the source of his strength comes from materialistic things or ego, you’re in for a rough ride. Such dreams represent destruction, disaster, and failure in your midst.

If you want to avoid defamation and loss, an immediate change in your lifestyle and mindset is necessary to get on the right path. Speak to someone of high moral integrity who can help you.

A person with bleeding lips often represents infection or disease. In the simplest case, this could be caused by dehydration, but other complicated illnesses could also cause bubbles and bursts in the mouth.

True to its imagery, this dream is a symbol of sickness. Either you or someone close to you is suffering from hidden ailments. This could point to an undiscovered diagnosis, a mental health issue that is being ignored, or a perceived void in one’s life that needs to be filled.

Constant bleeding with no solution – such as the persistent mouth or nose drips – shows that you’re in a tight spot. You may feel like there’s nowhere to turn or no one to lean on, but this is never the case. If you want a new life or a new opportunity to create a rich life, the first thing you need to do is believe that there’s a way to make this possible.

Such bleeding may seem like a barrier, but there are always other options. It’s time to ask for help and find more resources in your waking life.

Bleeding teeth, gums, or missing teeth altogether represent certain health scares and fears. If the person bleeding is a woman, this could point to a past or future miscarriage, so be extra careful if you’re trying to get pregnant.

Having no teeth and bleeding gums signals helplessness and depression. There is a deep burden on your shoulders that you need to rid yourself of. Clear your consciousness of these weights to feel healthy again.

Blood stains on your clothes, bloody hands, or a trace of blood on other parts of your body dictate guilt. If the person in the dream experiences the bleeding of his nose dripping onto his clothes or hands, he is reconciling with a past sin that needs to be dealt with.

This person may also harbor bitterness towards groups of people, poor people, their boss, or their relatives. The spreading blood symbolizes the evil grudge within them that keeps growing and consuming their subconscious.

It’s time to deal with this bitterness. Use a mediator if necessary, and remember that forgiveness is a strength and a skill, not a weakness.

While blood flow is a symbol of life, bleeding is a hint of darkness and loss. Dreams about bleeding from a mouth in particular often point to repetitive bad habits, future problems, and a sense of helplessness. By better understanding your dream, you can face these negatives and turn them into moments of growth in your waking life.