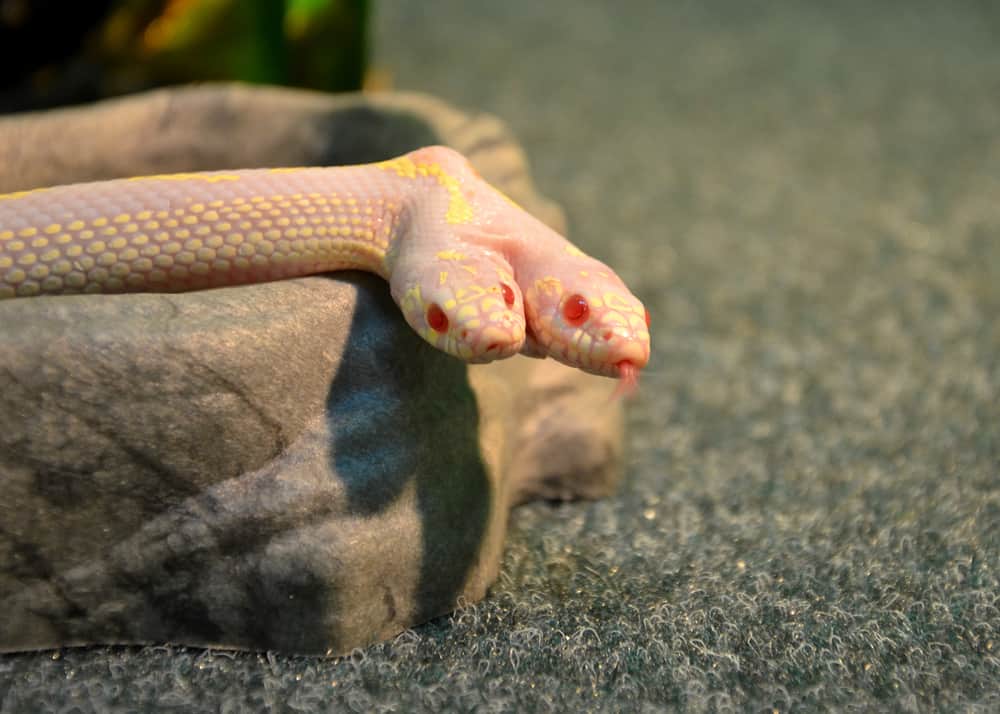 Even though a two-headed snake sounds like something from Greek mythology or a fantasy movie, two-headed snakes exist in the animal kingdom. However, this phenomenon is quite rare, called bicephaly, or the condition of having two heads.

From the dawn of the ages, humans have been fascinated with unusual phenomena such as the two-headed snake, and the various ancient cultures prove that.

They have various meanings depending on the culture and religion and are generally seen as symbols of rebirth, deceit, transformation, and evil.

What Does a Two-Headed Snake Symbolize?

Although most people hate snakes and associate them with fear or disgust, their symbolism is surprisingly positive. Due to their ability to shed skin through sloughing, they are considered the symbol of fertility, rebirth, and transformation.

So if you often see two-headed snakes in your dream or think of them for some reason, try to incorporate this meaning into your current life. To understand this concept, we must understand why the snake shed their skin in the first place.

They do it for two reasons: they start growing, and their skin does not fit anymore. The second reason is they are trying to get rid of parasites. So, shedding skin in a spiritual realm implies letting go of something that is bothering you( such as a parasite).

Letting go then indicates entering a new phase in life, a sort of transformation that will come your way. Depending on what is currently happening in your life, it can signify rebirth- you might see a spiritual or personal renewal.

It is not surprising that a creature similar to a dragon and snake called Amphisbaena exists in Greek mythology. So what is amphisbaena, and what does it symbolize? Amphisbaena is a mythical not-eating serpent with two heads.

Although you would expect its heads to be next to each other, they are not. It has a normal head, while its second head is found at the end of its tail. Amphisbaena is a combination of the words amphis- ‘both ways’ and bainien- ‘to go,’ implying that it can slither both forward and backward.

Because Amphisbaena was born from a drop of blood that fell from Medusa’s severed head, it symbolizes unique vision, knowledge, and evolution. It can also represent ever-changing nature or a never-ending cycle and mystery.

3. Union of Sky and Earth/ Duality

As mentioned, a two-headed snake is a phenomenon that has fascinated us for centuries. Therefore, it is present in some of the oldest cultures in the world -the Aztecs. They mentioned the image of a two-headed serpent much before the Christian and Hebrew texts.

In the Aztec culture, the two-headed snake is called Quetzalcoatl and has feathers. This feathered serpent represented the union between of sky and the earth, also known as complementary dualism.

This duality refers to its two heads which then infers to the ability to have different perspectives and unique outlooks. It can also be seen as the acceptance or presence of opposing forces and powers in life, such as good and evil and life and death.

Everything that has a beginning also must have an end.

The feathers tie this creature or monster to the sky, while its serpent body connects it to the earth (it has to slither on the ground to move).

In the Aztec culture, snakes were celebrated, which explains why the serpent imagery is often found in the iconography of pre-Hispanic Mesoamerica. Furthermore, they were considered to be agents between the underworld, sky, and earth.

If we look at the meaning of snakes in the Bible and some other religious texts, we learn that they are connected with these negative notions of poison, evilness, cunningness, and deceit. For example, in the New Testament, the snake refers to Devil and Satan.

You are most likely familiar with the story of Adam and Eve and how the serpent tricked Eve into eating the apple from the forbidden tree. As a result of Eve’s actions, both she and Adam were exiled from Heaven.

What this story tells about the snake is that in the Christian religion serpent is seen as a symbol of evil power, temptation, sin, and deception (the snake lied to Eve to get her to take the apple).

However, one can also see that snakes are actually represented as intelligent creatures who possess the genius to convince and trick others. But they use it for the effect of their sinister plans.

You might have seen ouroboros or heard of it- an ancient symbol of a snake eating its tail, symbolizing infinity, immortality, and the cycle of birth. This term is derived from the body of a snake that coils up like an infinite loop.

It also implies the continuous renewal of life, which is ever-present. Ouroboros means the concept of eternity and the never-ending cycle of destruction and life. These notions are one of the fundamental and indispensable laws of the world.

They are mutually connected and intertwined- in order to enter a new beginning or rebirth, one must first face destruction. Destruction gives birth to a fresh start, which will face defeat. Everything that lives must die, and everything that passes will be born again.

Suppose you had a dream about a two-headed snake, especially a red snake, that might hint at the passion and your sexual expression. In many of his works, Sigmund Freud, one of the most-known psychoanalysts, posited that a snake is a phallic symbol.

As such, it is connected to your passion and your sex life. Dreaming of a two-headed snake might hint at your unusual sexual desires that you do not want to share, and you are afraid that you would be considered a freak if you shared them.

However, it can also mean that you have some doubts related to your sexual partner. First, think about your sex life and what you believe is problematic. Then try to connect it with the particular dream scenarios that you had.

As a symbol of temptation, maybe you feel tempted in real life to do something that might be considered immoral or illicit, but deep down, you still want to do it, and your consciousness and subconscious mind are battling.

The two-headed snake symbolizes indecision for apparent reasons. Because it has two heads, it infers two different opinions or, in the spiritual realm, two different paths and choices. Therefore, if you often see it in your dream, it might mean that you are an indecisive person.

Interestingly, in real-life two-headed snakes have low chances of survival because one creature has two heads and thinks differently with each one. In addition, two heads or two brains make different decisions, posing a problem when trying to escape predators and find food.

In the spiritual realm, this characteristic of a two-headed snake implies that you are also torn between two choices, which can be your end and your demise.

The longer you spend time going back and forth between your choices, the more time you lose, which could have been utilized better. Also, having a vision and direction in life allows you to achieve your goals.

Interestingly, a two-headed snake is also seen as a symbol of healing, faith, and inner transformation. This meaning is also derived due to their ability to shed skin and heal quickly.

Even though you might have heard that snakes can grow their tales if they are cut, that is actually not true. Those are extraordinary power that lizards have, but not snakes.

Regardless, they heal very fast, which is why they symbolize healing. In the spiritual realm, recovery is usually connected to mental rather than physical healing. So the two-headed snake you see in your dream may be telling you that you are in the process of healing.

On the other hand, it might be trying to direct your attention to your spirituality and your attitudes in life that need ‘healing.’

It is also known as a symbol of mystery for apparent reasons. Two-headed animals are pretty rare in the animal kingdom, and for a long time, it was an unexplainable phenomenon that riddled the minds of scientists.

Snakes are amazing, scary, and awe-inspiring creatures. A two-headed snake is a miracle or some deviancy, which is still fascinating enough, depending on your views. We have ascribed numerous meanings to these creatures.

They can represent chaos, evil, deceit, temptation, trickery, and sexual expression. Yet, interestingly, throughout history, they were seen as symbols of knowledge, healing transformation, eternity, duality, fertility, patience, and wisdom.