Skip to content
Liquids and Solids » Dream About Killing Someone?(13 Spiritual Meanings) 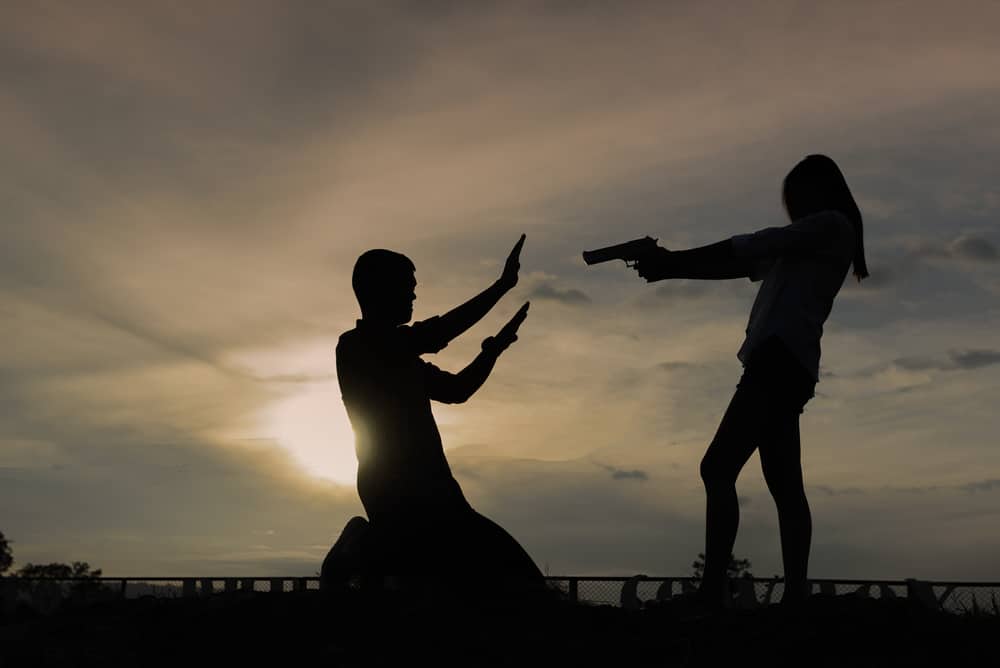 Few dreams feel as ominous as those featuring someone’s death, especially when you wake up and realize that you were the one committing the murder in your dream.

Still, what does it mean if you dream about killing someone? Should you be worried or at least talk with someone about it? While we can’t delve into every detail of our subconscious mind in a single article, we’ll do our best to go over the basics of psychology behind a dream about killing another person.

Does such a dream mean you are a bad person?

For any normal person with a conscience, dreaming of killing someone can be a traumatic experience. Does this mean that you really want to murder another person? That you’re capable of an act so vile? That there is an “evil” side of you that you haven’t been aware of all this time? Is there something “wrong” with you?

While there technically is a possibility that you are indeed a clinical psychopath or sociopath, we’d venture a guess that if you were, you wouldn’t be worried about such dreams. The key distinguishing traits of such people are that they don’t feel empathy for other people or remorse for causing others harm.

So, in that sense, the mere fact that you’re worried about your dream and you’re reading this article is self-proof that you don’t have such a problem.

That being said, you can still subconsciously want to kill another person even if you don’t have any of the two issues above. We’re not going to sugarcoat it – by definition, dreaming about killing another person can mean that you have some underlying motivations for such an act.

Maybe you do have some pent-up aggression or rage tendencies that you need to look into. However, this is not the only interpretation and is far from the most likely one. Instead, in most other cases, the issue is much more metaphorical and emotional.

The symbolism of a dream about killing someone else

Some people find it surprising but this is actually a fairly common dream that many folks have at one point in their lives or another. And the motivations for such a dream can vary dramatically. Here are a few examples before we go into a bit more detail on each of them:

In all of these and other situations, the dream of you killing someone can feel like a gross overreaction due to a minor inconvenience or a manageable personal issue. And that is certainly one way to look at it.

Why would my mind dream of something like that?

It is crucial to remember that our subconscious minds treat virtually everything as metaphors, allegories, and symbols.

So, while a literal murder is definitely a horrendous act for anyone’s conscious mind, to our subconsciousness it’s just a metaphor like any other.

What’s more, the same applies to many people and characters we dream of too. In a great many cases, when we dream of someone else, be they a stranger or someone we know, the person we’re dreaming about is actually a metaphorical representation of a feeling or aspect of ourselves our subconsciousness is trying to pinpoint.

The famous “Killing my bully” example

Let’s go over the “killing my bully in my dream” type of scenario. This is the type of dream billions of people have had at least once in their life and many of them – much more often. At first glance, it seems like this dream simply signifies your desire to murder someone who tormented you in your past. Yet, that’s almost never the case.

The much more typical interpretation is that you have residual pain and unresolved issues due to your bullying that weigh in on your subconscious and it “wants” you to get rid of them. So, a dream of you killing your high school bully really just means that you need to kill the pain you feel from that past experience, not the person itself.

Of course, all that is situational and we can’t offer a precise read of your individual psyche – you should always consult with a professional if you have any worries or in cases of continuously repeated dreams.

But, in the vast majority of cases, a dream about killing someone has a more accurate and harmless interpretation that can be used to provide insight into what ails you rather than be a warning for some subconscious murderous intent.

To go into a bit more details, however, let’s go over some other points that can be looked into.

As with the bully example above, if we go over the specifics of the dream we can usually stumble upon some extra hints on what it means as there can be many different reasons for such dreams.

Who is the victim in your dream?

As you’d imagine, the exact identity of the person in your dream can also shed some light on the dream’s meaning. Let’s go over the most common scenarios:

Very often, the victim of our dream crime isn’t someone we know but a stranger instead. This is a tell-tale sign that we didn’t so much kill “a person” but a subconscious metaphor about some aspect of our day-to-day life that we struggle with. In such cases, the “victim” isn’t just a stranger but is outright faceless.

If you’ve had such a dream, the best way to go about it is to pen down as many details about the dream as you can as soon as you wake up. That’s because the context of the dream is what holds the core of its meaning, not the person itself.

2. Someone we work with

Other very common victims in murder dreams are people we work with – our boss, a colleague, a rival for a promotion, and so on. This can be distressing as those are real people we interact with on a daily basis but the meaning of such dreams is also fairly easy to decipher – it’s just work-related stress.

Such a dream doesn’t necessarily mean that you want to cause harm to the person but is usually indicative of the hyper-competitive nature of our work. There are countless industries out there that treat work outright inhumanely – we call it “the grind”, “a struggle”, “a life or death project/deadline”, and so on.

Even when we are at work we often use phrases such as “I’d kill for an extra day on this project” or “I’m dying to get that promotion.” Given that we use such phrases in our waking and conscious life, is it any wonder that our subconscious mind uses similar metaphors to express its discomfort with all the stress we accumulate during the day?

3. A family member or friend

Probably the most distressing dreams are those in which we commit the unspeakable crime against a family member, a friend, or someone else we have close ties with. Such dreams have ruined many a friendship and connections to relatives but they don’t have to.

As with our work colleagues, a dream about harming a relative doesn’t mean that we actually want to do it. Instead, it almost always indicates a simple frustration we’ve accumulated in our recent interactions with that person.

It is difficult to imagine how something as simple as a few negative emotions can cause such a dream but don’t forget that stress toward other things can also pile on and affect our dreams.

In essence, your subconscious can be like a pressure cooker – there may be many things boiling in it and when they build up enough pressure, either one of them can be the first to break through and explode.

So, even though you have lots of stress in different areas of your life, if you’ve been recently frustrated with a friend or relative even just slightly, an unfortunate dream can come to the surface.

How did it happen in your dream?

As with actual murders, a dream about killing someone can also differ based on how the incident happens. For example, a knife is a more personal weapon and hints at a more personal beef with the person/issue you’re dealing with.

A gun, on the other hand, especially a long-range gun, is much more impersonal and usually indicates that you don’t feel as personal about the person or issue and just feel a need to get some problems out of your life.

Similarly, if you dream that you are a serial killer, killing witness after witness of previous crimes, and even dealing with police officers in a GTA-style scenario, this also indicates a more impersonal issue such as straightforward general stress build-up.

Or, it could literally indicate that you’ve just watched an action thriller on Netflix the other evening – it’s often as simple as that.

Should you talk with a professional?

So, if you’re wondering whether you should view such a violent dream as an omen that it’s time to visit a mental health professional, to seek acceptance, and to find a way to deal with some guilt or another internal issue – yes, it’s likely a good idea to do so.

Taking such a dream as a hint to seek help will at best help you deal with an underlying issue you didn’t know existed or, at “worst”, you’ll get key insight and help in other areas of your life as well as comfort in knowing that there’s nothing wrong in the dreams you’re having.

A dream about killing someone can be the source of a lot of distress and discomfort in our everyday lives but is almost never the dark omen we think it is.

While there are rare cases in which it can signify a serious problem in our subconscious mind, almost always it just indicates a different issue such as stress, anxiety, depression, a feeling of being stuck or kept back by circumstances, and so on.

So, while you don’t need to freak out over such a dream, it is still wise to consider consulting with a professional about what it might signify and how you can deal with any underlying issues. If anything, a dream about killing someone can be one of the best symptoms and motivations for a beneficial life change.