Skip to content
Liquids and Solids » What Does It Mean When You See A Double Rainbow? (9 Spiritual Meanings) 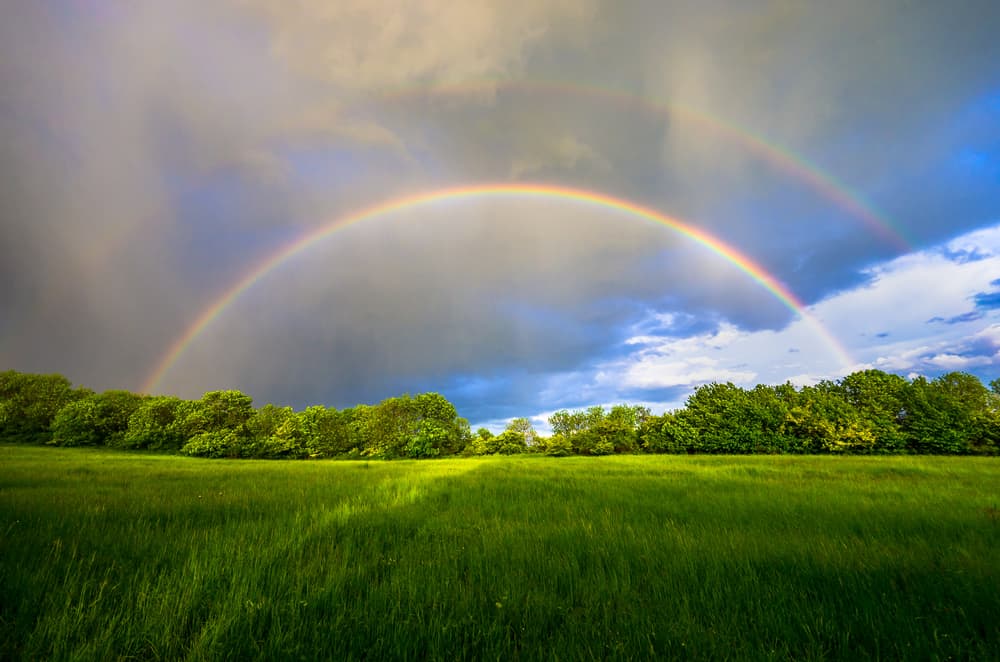 Few natural phenomena are as beautiful and breathtaking as seeing a rainbow arc across the sky after a storm. All those colors, from red to orange, to yellow, to green, to violet, just seem to add a touch of magic to life. It’s striking…And sometimes, you get to see a double rainbow!

Double rainbows are both rare and spectacular. It’s not surprising that cultures all over the world have come up with spiritual meanings and omens for them. So, what does seeing a double rainbow mean in real life? Or in a dream? The answers might surprise you.

What Does It Mean If You See A Double Rainbow?

Remember the old Irish tale of a pot of gold at the end of the rainbow? While that tends to be more commonly associated with a single rainbow, many people believe that a double rainbow tends to be an omen of good luck related to money.

Whether or not there needs to be a leprechaun involved remains to be seen, but it seems like it is a good sign that you will get some money. The omen only seems to double when you add a secondary rainbow.

People who see a double rainbow might be able to enjoy a windfall, a new opportunity at work, or even something as simple as being able to get a raise at work. If you are worried about finances, don’t panic. Abundance is on the way.

2. You are wealthy on Earth and in heaven

Wise Living Institute explains that the double rainbow meaning is a bit different from seeing a single rainbow. The first rainbow is a symbol of earthly gains and life in this plane. The second one is said to be a sign of your ascension from “earth to heaven” spiritually.

This means that seeing one is a sign of good luck on all fronts, but it comes with a bit of advice. Now would be a good time to listen to your higher self when it comes to matters of spiritual advice. Perhaps it’s time to meditate on what truly makes you wealthy.

3. You’re about to have a dalliance with your true love

Certain Native American cultures have a lot to say about the sight of a double rainbow. Like most other groups, they see a double rainbow as a beautiful and hope-filled sign from the heavens.

Many Native cultures believe that the sight of a double rainbow means that you will encounter your true love in one form or another. This means that the person you’re dating is a twin flame, or that you’re just on the right track.

Romantically speaking, this is a good omen that suggests that you’ll be able to enjoy a better love life in the near future. Think of it as a nudge and wink from the universe saying, “Go get ‘im, you romantic sweetheart!”

4. This could also be interpreted as a message of hope from the universe (or God)

Countless cultures view double rainbows (or rainbows in general) as a symbol of hope. While rain might be what creates a rainbow, the beauty they offer is truly breathtaking. This is the universe’s way of saying that there’s always a silver lining to dark times.

If you have been dealing with a hard time in life, that double rainbow might be a message to take heart. After the rain comes a beautifully colorful period in life, with new beginnings and a happy ending.

In the book of Genesis in the Bible, this was particularly salient. Think about the story of Noah, when he took the ark to help save animals from the great flood. When the flooding ended, a rainbow shone where he would park his boat.

5. There’s a great transformation ahead of you

From a spiritual perspective, a double rainbow tends to involve a major change. Many people believe that this is a sign of good fortune involving the evolution of your life. You might start seeing better career opportunities, new ways of seeing things, or just a new friend.

If you are usually the “social reject” or a recluse, then a double rainbow could mean that you’ll find a group of people who will make you a social butterfly. If you’re usually held back by fear of what others think, you might gain confidence to do what you want to do.

This way of seeing double rainbows suggests that your life is going to start to kick up a notch. It’s a good omen, so don’t panic. It just means things are going to change so that you can be better.

6. A loved one has made it to heaven

Rainbows often are seen as a connection between the material world and the spiritual realm. If you see a double rainbow at a funeral (or even a single rainbow), it means that the deceased made it to heaven without any issue.

Among Western cultures, there’s also a tale about the “Rainbow Bridge.” The Rainbow Bridge is the part of heaven where all good animals and pets go. The discovery of a rainbow after a pet’s funeral is a sign that your furry friend is happy in the spiritual realm.

There is a longstanding view of rainbows being a bridge between worlds. Unsurprisingly, this tends to mean that someone who did well in life may get a special honor (or entrance) into a heavenly realm.

7. You may get a message from spirits

The use of a rainbow to herald a revelation or message is a fairly common belief. In Ancient Greece, Iris used rainbows when she was delivering a message. In Rome, it was a sign that Mercury was there to deliver a message in all his glory.

Modern beliefs are a bit more grounded. People today believe that this is a sign from deceased loved ones that they are here and that they love you. Needless to say, if you have been grieving a loved one, this can be a good sign that you’ve still got them around you.

Regardless of where the message is coming from, an omen like this asks you to keep an eye out for unique synchronicities. If you notice coincidences that involve guidance or just messages of love, take them to heart. They’re meant for you!

8. Destruction may come your way

While a rainbow is usually seen as a sign of prosperity, spiritual awakenings, and a promise of better things to come, this is not always the case. Though rare, certain cultures do view this as a bad omen.

In certain Amazon cultures, a rainbow is a sign of misfortune. In most cases, it’s a sign that you may lose a loved one close to you. Certain parts of Burma also paint rainbows as a negative omen that can lead a person to their demise.

Multiple cultures also believe (for reasons unknown) that pointing at a rainbow is an omen of bad luck. So if you see one, don’t point. Just admire it.

Generally speaking, these interpretations of a bad outcome are fairly rare. Unless you have a specific tie to a culture that notably sees a rainbow as bad luck, you probably don’t have to worry about this.

9. A spiritual awakening is coming to you

Double rainbows (and even the rare triple rainbow) tend to be seen as a deeply spiritual symbol. Part of this deals with all the colors—all of which tend to be linked to the colors of different chakras.

Buddhist cultures suggest that a person who has become fully ascended in enlightenment will turn into a rainbow as a result of their soul work. Buddha himself is said to have “acquired the rainbow body of the ascension.”

Obviously, this doesn’t exactly mean that you will turn into a rainbow. What it may mean, though, is that you will have a spiritual awakening of some type. This is a moment where the universe is here to help you come into yourself in a beautiful way.