Skip to content
Liquids and Solids » What Does It Mean When A Stray Cat Follows You? (9 Spiritual Meanings) 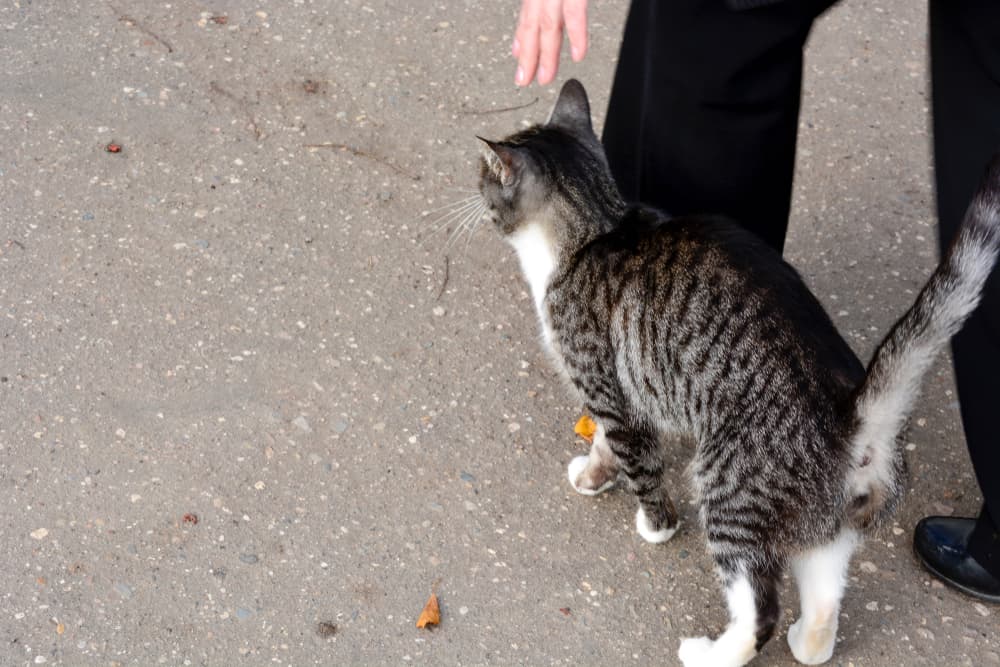 You are walking home from your job and spot a kitty or a feral cat that begins to follow you. Now you start to wonder whether it has some spiritual meaning and significance.

There are numerous reasons a cat chooses to follow you; for example, they might see you as their potential caregiver. However, the spiritual meaning of this encounter and its following depends on your belief system and understanding of the world.

If you believe cats are spiritual beings with rich symbolism, you might perceive their following as of higher or specific importance. It is essential to note that cats have been around for centuries, and many cultures, such as the Egyptians, believed that cats have magical powers and were considered a sort of a deity.

Therefore, their presence in our lives is not random, and we should consider all possibilities and reasons.

Why Is A Stray Cat Following Me?

Most stray animals tend to follow people around because they hope you might provide them with some food and water. Cats are highly intelligent and adapt very quickly, so they observe human behavior and learn that people tend to either provide food or leave leftovers.

So, following someone around might mean they will get a potential meal and a quick spot to rest before continuing their ‘cat business.’

If a cat realizes that you provide food regularly, you might have just got a pet without knowing it because that cat will sometimes leave your side.

2. It Seeks Attention and Love

Stray cats that have been appropriately socialized and have been around people will most likely follow you, but it can also depend on the cat’s breed and personality. Some cats are generally more friendly than others.

So, if you see a well-fed cat following you, she likely sees you as someone who might provide it with some free ‘pets’. It is even possible that someone else’s cat might follow you for the same reasons.

As mentioned, cats are brilliant and cunning creatures. Over the centuries of their existence, they have learned that having a caretaker means having a carefree life with plenty of food, toys, and affection.

Especially if the stray cat you found has lived previously with someone and they decided to get rid of it, that cat will most likely try to find a new family and follow a trusted person. Even though they are known as solitary animals, cats still want to be protected and safe.

And what better way to achieve that than finding themselves a human being to take care of them?

You must have heard of the saying ‘ Curiosity killed the cat,’ but if you have not, it is generally known that cats are inquisitive and will often risk their life trying to follow something through.

When something catches their attention, their curious nature drives them to investigate it, regardless of the consequences. So if a stray cat is following you it might mean that the cat is curious about you. Something drew the cat to you, and now it will not leave you alone.

Also, cats like to wonder and investigate new territory, which might explain why the cat suddenly decided to follow you across five avenues. If you see that at some point, it lost interest and chose to return, the cat probably found something more interesting.

Cats like to have a safe place to rest and hide from potential dangers and threats. If a cat follows you, it can mean it wants to find shelter, especially during heavy rain, snow, and freezing temperatures.

In these conditions, survival depends on finding shelter, so it will most likely do anything to attain it, including following you around. However, a cat can track you because its owners maybe forgot to leave the door open, and now it is wandering around.

Spiritual Meaning Of A Stray Cat Following You

Whether you believe in higher power and coincidences, it is a bit unusual that a cat that could have followed a dozen of other people chose to follow you and not them. Spiritually, this is a sign that the cat has chosen you.

What does that mean? According to a study, animals can think, feel, and even plan ahead. So, the cat saw you and, for some reason only known to the cat, decided to choose you out of a dozen people.

Maybe it has seen you with other animals and sensed your good nature, which made it think you could be its perfect caretaker. Often animals that are scared and refuse to approach humans will become more relaxed if they see humans interact with other animals.

2. You Have Good Energy

Many believe that cats and dogs can sense people’s good and bad energies due to their ability to read someone’s body language and smell well.

It is well-known that they can read your emotions, so some people think it is not far-fetched to believe they see energies, spirits, and auras. With this in mind, maybe the cat follows you because it senses your positive vibrations.

It connects to you at some level and drives it to follow you around and try to become your friend.

Whether you believe in good or negative energy, you must have witnessed at least once that someone’s pet, especially a cat, will take a strange and unexpected liking for someone.

Also, they might be very aggressive to unknown people for unknown reasons, and many believe that they read your energy and then behave according to their reading.

Some say that if a stray cat follows you around, it is a sign of bad luck, and it should be understood as a warning regarding some events in the near future, especially if the cat is black.

So, if a black cat follows you, take it as a hint to be more careful and avoid getting into risky business deals. You might also pay attention to your lifestyle and whether there is something detrimental without you noticing. It may be something seemingly irrelevant such as your diet or some habits.

The cat represents something that is having a bad effect on you, and it is following you constantly, which means you are already deeply involved.  You might experience some issues trying to locate what it is and how to counter the problem.

If a cat follows you, it might be a sign from the universe to rethink your attitude in life and how you treat others around you, including animals. For example, are you often grumpy, reserved, cruel, and ignorant of other people’s pain and suffering?

If you recognize yourself, maybe you need to change your attitude and turn a new leaf in your life. The way we treat animals tells a lot about us, mainly because helping animals is a selfless act.

So being kind to others and showing generosity will change your perspective and the energies around you. It would help if you were open to other options, possibilities, and ways of thinking – it will allow you to grow, upgrade yourself and be at peace with yourself.

What To Do When A Stray Cat Follows you?

If you feel like becoming a pet owner and keeping the cat, you should provide the cat with some food, a blanket, and a litter box.

However, if you do not want to keep it, you can take it to the nearest vet clinic and check whether it has a microchip, in case its owners are looking for it.

If a cat has a collar, it means it has an owner, so maybe try to distribute posters in the neighborhood and spread the news through social media platforms such as Facebook. Also, some collars have identification or contact details in case the cat gets lost, so try to look for those.

If the cat is in bad shape or has fleas, parasites, scars, or wounds, you might want to take it to a veterinarian, or you can call a local shelter or a rescue group. However, you might need a cat carrier to transport it.

Some people come across feral cats– if this happens to you the best option is to contact an organization with Trap-Neuter-Return (TNR). This program includes spaying, fixing, and returning the cat to its territory.

Cats usually follow humans because they want food, shelter, home, affection, and love. On the other hand, there are several different spiritual meanings for a cat following you around.

It might signify that you are its chosen one and have good energy, or it is a sign that something terrible will happen to you.

Spiritual interpretation of the cat following you relates to your personality and the similarities between that cat and you regardless of whether it is a pet cat, male or female, kitten or an adult cat.

The cat can be your spirit animal because it chose you! Has this ever happened to you? Please share your experience with us, and do not hesitate to ask any questions.