Skip to content
Liquids and Solids » What Does It Mean When Birds Chirp At Night? (8 Spiritual Meanings) 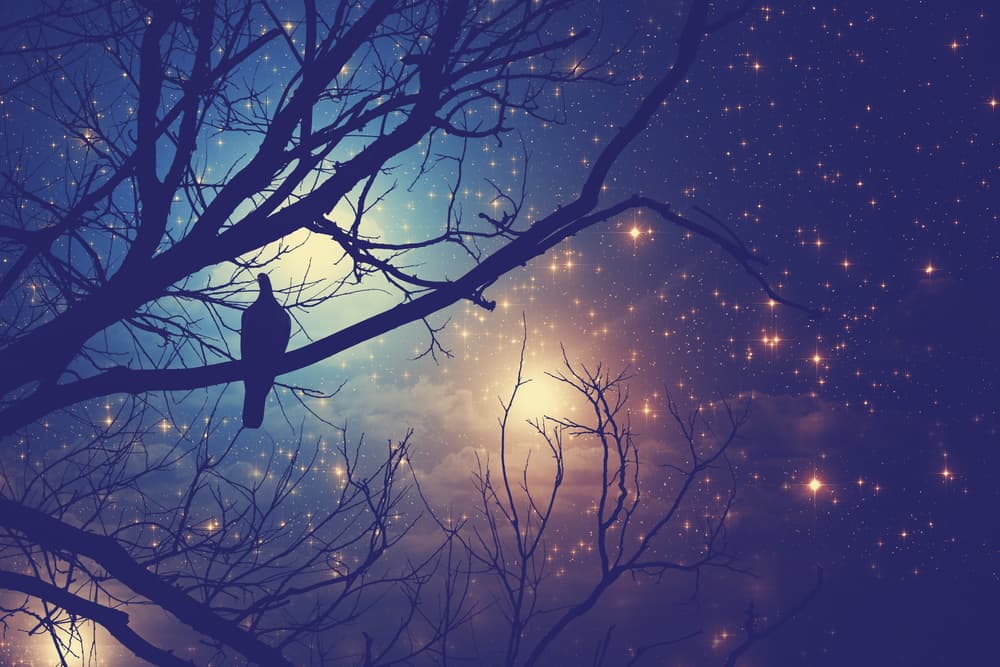 Birds are one of the main staples of forest noise. When you wake up, it’s only normal to expect to hear a bird chirping at your window. Most of the time, people expect birds to keep their peeps and cheeps up during the day, not during the night.

Hearing a bird chirping in the middle of the night can be fairly unsettling, especially if it’s not something that you typically hear. Did you ever wonder what it means to hear birds making noise in the nighttime? Let’s take a look at what it could be an omen of…

What Does It Mean When Birds Chirp At Night?

1. First, it could actually be fairly normal bird behavior

It’s important to note that there are some types of birds that may be awake during the night. The hooting of an owl, for example, is totally natural. Also, you might hear the Northern Mockingbird, robins, thrushes, whip-poor-wills, or similar bird species chirping away at night.

It’s important to note that some birds are sensitive to light pollution, such as the glow from streetlights. They may start to feel confusion and disorientation that makes them believe it’s still the day.

Being near a lot of bright light can mess up birds’ Circadian rhythm. As a result, a lot of birds might have bad sleep-wake cycles. If you’re used to hearing bird calls at night, it’s okay to assume you live in an area that’s just too bright for bird life, such as an urban area.

If you’re not in the heart of urbanization, there’s another mundane explanation to consider. Many birds start getting chatty at night during months of migration, simply because their internal clocks are telling them it’s “time to go, go, go!”

So while it may be unsettling, it’s important not to freak out and assume there is some paranormal behavior afoot. With that said, if you are superstitious and want to take a look at what it could mean, keep reading. It’s okay to be a believer.

2. You might have been ignoring signs that the universe has sent to you during the day

The universe is always trying to send us signs of encouragement, and at times, signs of warning. Sometimes, we notice them. Other times, we don’t. Bird calls are often seen as a way of angels and the universe literally calling out to us.

When the dawn chorus of bird calls gets drowned out by morning traffic, spirits may decide that things have to get a little more vocal at night. And so, they will start to raise the alarm. This is particularly common when the message we are supposed to get is an urgent one.

Timing matters here. If you hear birds chirping at night from 1 to 2 AM (or even midnight) then you probably have a warning in your future. This tends to be a sign that you should watch yourself and keep your eyes open for danger.

Have you been at a crossroads where you’re not quite sure which direction to take? Have you been acting a bit more reckless than usual with your life? These chirps could be a sign that you need to stop and reflect on your actions before you end up in a bad situation.

3.  There could be a spell being cast near you

In many parts of the world, night time comes with a witching hour. This is because dim lights tend to be associated with spellcraft and because many cultures view nighttime as a time for witchy business. This is particularly true about Witching Hour, or 3 AM.

If you start hearing birds chirping around the time that the clock turns 3, you might have a witch casting a spell nearby. In the Caribbean and parts of America, it’s said the spells that set these birds off tend to be malevolent in nature.

Did you have a bad run-in with someone you know that practices witchcraft? Are you worried about someone casting a curse on you? Unfortunately, this is an omen that suggests you might be hexed soon.

Many people believe that hearing a bird chirping during Witching Hour means that someone around you is being attacked. You might want to check up on your friends and family at the start of a new day if you hear those chirps at night.

4. You might be able to talk to the deceased

Though the sound of birds chirping at 3 AM is often associated with witchcraft and black magic, it’s not always the case. Sometimes, this can signal that the curtains between the living and the dead are open.

In other words, this might be a moment where you may be able to talk to the deceased and actually have them hear you. If you recently lost a loved one, it’s okay to give them a quick message of love and respect. They’ll love that.

5. Someone near you is dying

A classic belief about birds chirping at night is that it could be an indication that a loved one will die soon. This is particularly true if you feel scared, worried, or even fearful when you hear the birds chirping.

Native Americans are particularly leery of hearing birds at night. Certain bird species, including the barred owl, screech owl, and the Eastern Whip-Poor-Will tend to be linked to an omen of death. If you hear these birds at night, brace yourself for the bad news.

Most Native cultures note that there is a lot of negative energy surrounding nocturnal vocalizations from birds. The more unnatural the bird’s call seems to feel, the worse the omen tends to be.

6. The universe wants you to start spreading your wings

If you are looking for a lighthearted reason why you might hear birds at night, then look no further than this explanation. Hearing a lot of nocturnal birds talking it up could also be a sign that you’re ready to spread your proverbial wings and fly.

People who are “late bloomers” are often going to assume that they can never actually reach their full potential. Sometimes, birds come as a sign that it’s time to change that perspective. You have the power to do better and should take heart about it.

7. Angels are watching out for you and are sending you good vibes

There’s no doubt that birdsongs can be a beautiful way to get healing energy to you, especially if you’re able to hear full songs during a time of duress. Those chirps you hear could be a way that angels offer you a healing song during tough times.

Angels often take the form of birds when they are here on our plane. If they can’t reach the human beings that they were trying to contact during the day, they may try to chat you up at night.

Does the song you hear soothe you, or perhaps give you a sense of freedom when you used to feel trapped? If so, it could be a guardian angel giving you the support you need from the spirit realm. This is a meaning that you may have to intuit. In other words, you’ll feel it if it’s true.

On a similar note, the birds that you hear chirping could also be a sign that an angel has been protecting you from harm. Birds signal danger by chirping and hooting. If a bird is chirping without much danger nearby, they probably is just an angel saying, “Mission accomplished.”

8. It may be a good time to cleanse your home’s energy

Most people agree that hearing chirpy birds in the middle of the night is a bad omen. More alarmingly, it tends to carry negative energy and a threat of black magic to those who crossed the wrong person. Even if it’s not as ominous as a clap of thunder, it’s still alarming.

If you begin to hear the chirping of birds alongside other bad omens, then the best thing you can do is brace yourself for some obstacles in life. Sometimes, doing a home cleanse and working to clear up bad energy around you can help you avoid misfortune.

There are tons of ways to do this, including burning incense, meditation, asking a priest to bless your home, or even praying to the spirits of your choice. The important thing here is to invite positivity and ask the negativity in your life to leave.

Have you been hearing the sounds of birds echoing from the trees at night? Is there a spiritual meaning that we missed in our writeup? Tell us your thoughts and experiences in the comments below.