Skip to content
Liquids and Solids » What Does it Mean When the Moon is Orange? (5 Spiritual Meanings) 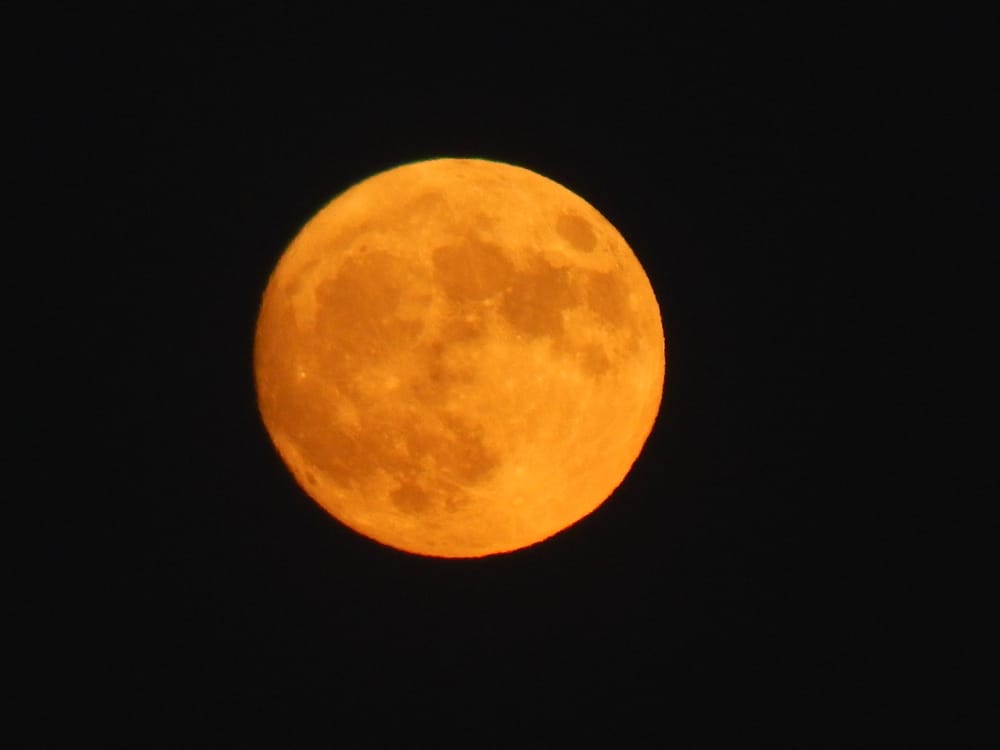 The naming for these full moons, along with most full moons, can be attributed to Native Americans, according to American folklore. However, people all around the world have long celebrated these orange moons with festivals and special celebrations centered around them.

The orange light of the harvest moon would glow throughout the night and allow farmers to work for more time. Also, these orange full moons signified the end of the summer season and the beginning of winter. But what does it mean when the moon is orange? Does it affect anything for you mentally and spiritually?

In this article, we’ll examine why the moon seems orange, as well as the different meanings behind it in folklore and spirituality. Keep on reading to learn more about the orange moon!

Why Does The Moon Look Orange?

In actuality, the moon itself does not change color. In fact, the color of the moon we see is what changes. The original color of the moon from up close is gray with different shades throughout its surface. However, when we see the moon, it can have many different colors like yellow, orange, and even red.

The most common explanations for this are the viewing angle and the atmosphere. Essentially, the moon reflects the light of the sun. So, depending on the angle we view the moon, it can be different colors. When it is directly above us during the day, it’s usually a white color.

As it becomes more horizontal, the viewing angle changes the perceived color to yellow. There are some rare instances like the “summer full moons” where the moon appears orange or even red and is called the blood moon.

Another moon illusion that has to do with viewing angles is its size. Sometimes, when you look at the moon near the horizon, it seems gigantic compared to how big it is during sunrise or sunset.

The second factor in the color of the moon is the atmosphere. The Earth’s atmosphere is filled with different particles, which act like a giant filter for light. Depending on the atmosphere’s composition, some particles can filter out the shorter wavelengths of light, like blue light, and allow the longer wavelengths to go through.

This gives the moon an orange hue or even a reddish hue. A thick atmosphere will have more particles to filter out the bluer wavelengths of light and change the moon’s appearance. The atmosphere can thicken due to dust, air pollution, smoke from wildfires, and volcanic ash from volcanic eruptions.

What Does It Mean When The Moon Is Orange?

For Native American tribes, the first orange moon around September signified the beginning of the winter season. This meant that all the tribe members would begin preparations for the long and harsh winters. The farmers would harvest their crops while the hunters would bring the extra game to store for the winter months.

Despite our knowledge about the moon today, it seemed like a huge mystery for ancient people, and many connected it to the divine. There were several legends about deities in Asia and Europe that lived on the moon, like the Chinese goddess Ch’ang O or the German goddess Frigg.

Here are the most popular spiritual meanings behind an orange moon:

People have associated the harvest moon with a change in seasons for centuries. Just like this physical change, the orange moon could signify a mental or spiritual change for you. This unique phenomenon could signal you to consider some changes in your life.

Change can be challenging for all people. No one really wants to change routine habits because it makes them feel secure and grounded. However, if you have a plan in mind and take things one step at a time, small changes every day can lead to bigger ones. Not to mention that you have the spiritual guidance of the orange moon to lead the way.

The orange moon is also a reminder that all good things come to an end. Therefore, make sure to cherish every happy moment in your life, as you never know when it might end. Similarly, all bad things eventually come to an end. If things seem particularly difficult, just hold on a little longer, and it will be over.

2. You Still Have Enough Time To Do The Things You Want

Traditionally, the orange moon was labeled as the harvest moon because it provided additional light to farmers. During dusk, when the sun would set, and the orange moon would rise, the orange light would illuminate throughout the night and allow the farmers to do more work.

In modern times, the harvest moon appears to show you that you still have enough time to do all the things you want, just like the farmers did. If you have ever stopped pursuing one of your goals or dreams because you think it’s too late, then you need to reconsider.

Life is too short to leave things undone. Additionally, you are never too old to achieve most things. Not to mention that you will most likely regret not pursuing that hobby or career you wanted because you thought it was too late. Remember to enjoy every moment and follow your dreams to live a fulfilling life.

3. Be Careful Of Distractions

As we mentioned above, the moon does not actually turn orange. Instead, we perceive it to be different colors based on the moon’s distance, its angle, and the atmosphere of Earth. In essence, the atmosphere acts like a distraction that stops us from seeing the true nature of the moon.

Similarly, the orange moon appears to warn you about the distractions of life. If you ever want to achieve all those dreams and goals you fight for, you must do your best to avoid distractions. While some minor, insignificant diversions won’t be the end of the world, you should always maintain your focus.

If you let distractions get the better of you, you might become a shadow of yourself that you don’t even recognize anymore. This can lead to feelings of self-loathing, anxiety, and long-term depression.

In several cultures, the orange moon is believed to bring chaos into people’s mental states. This belief is based on the fact that orange is very similar to the color red, which is usually associated with chaos, war, and blood.

This idea is also augmented by the fact that peoples’ emotions are usually heightened during a full moon like the orange moon. People have more fear or anger but also express more happiness and passion. This can lead them to make foolish decisions that prove to be detrimental.

In any case, you should do your best to control your emotions and not let them control you. If you don’t feel rational, take a step back and make the decision another day. This will benefit you and allow you to avoid costly mistakes in your life.

The harvest moon is a chaotic time where everybody’s energy is at its peak. Everyone’s blood is boiling, and they are ready to pick a fight with anyone over the smallest of issues. You should be very careful and avoid these chaotic situations. Also, take additional care when driving to avoid any potential accidents.

Nevertheless, the chaos of the orange moon might end up being beneficial for you, as it could introduce new people into your life unexpectedly. When you meet these people for the first time, they might seem insignificant. However, once you get to know them, it could lead to lifelong friendships.

Additionally, since the orange moon appears during the late summer, the passion and libido are still high. People will be more inclined to express their feelings, which could benefit you if you are looking for a new romantic partner.

If you find someone you like, do not hesitate to tell them. If they like you as well, they will reciprocate their feelings more easily, which could lead to a lengthy romantic relationship.

No matter what the orange moon means for you, it is undoubtedly a unique phenomenon. The fact that the Earth’s atmosphere can distort light so much that it changes the moon’s color is astounding. So, don’t miss your chance to encounter the harvest moon. Find the dates of the total lunar eclipse, and go out with some friends to enjoy this spectacle!