Skip to content
Liquids and Solids » What Does It Mean When The Sky Is Orange? (10 Spiritual Meanings) 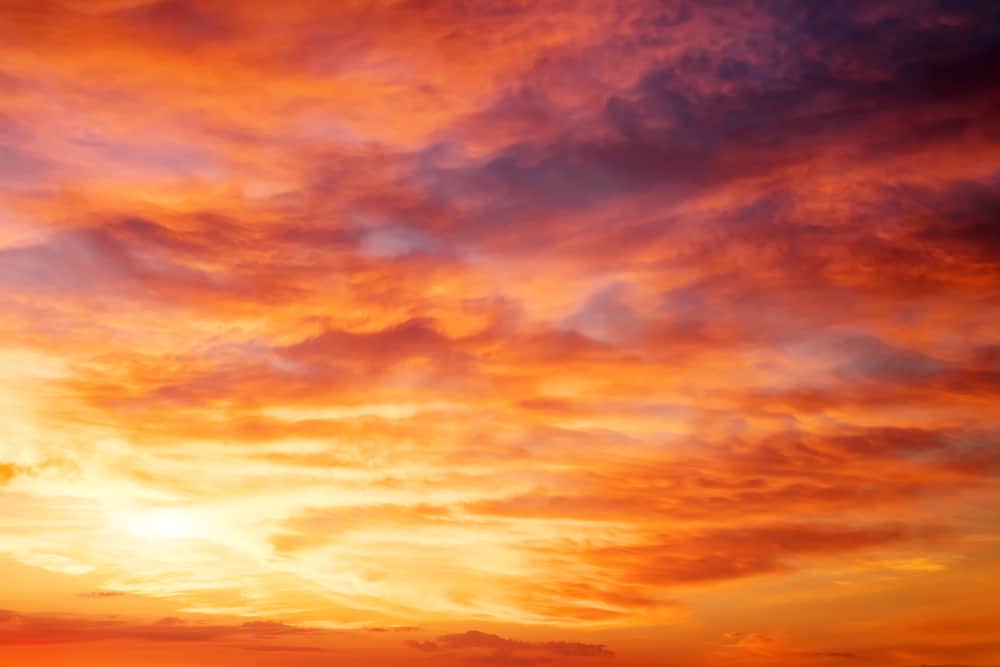 Oh, the beauty of an orange sky! Orange is a color that is bold and strong. It’s often associated with sunsets and the warmth of a fire in the middle of fall. When you see a sky that’s unusually orange, it’s easy to get swept up in its majesty.

Orange skies are beautiful and can often get featured in major dreams. Did you recently see a sky in your life that felt extra magical? What about dreaming about an orange sky? It’s time to uncover what this could mean for your future. Let’s take a look at the meanings now!

What Does An Orange Sky Mean?

1. First, seeing an orange sky can be a sign of the air quality or a standard sunset color

KARE11 did an entire post on this. During a sunset, the sun will start to move further away from the earth. This will mean that amount of blue light that reaches your area will decrease, leaving only longer wavelengths like yellow, orange, and red.

Do you live in a city area? That can contribute to seeing orange skies. In some cases, particle dust from pollution or sea salt can also add an additional filter to the light you see. This means that you’ll get mostly yellow or red light during sunset.

Orange skies mean that you might have a higher quantity of dust that makes it harder for smaller waves to make it to your eyes, This means that longer light waves, such as red, will end up being more prominent.

Lots of orange sky sunsets and sunrises can be an indicator of bad air quality. With that said, sometimes sea salt can also make sunsets on the yellow-orange-red end of the spectrum.

2. You might be near a forest fire or volcanic eruption

Remember when we mentioned that dust can turn the sky orange? Well, so can soot, smog, and smoke. California, in particular, is famous for its orange sunsets and orange skies due to the wildfires they have.

A red sky is often an indicator of a fire due to the sheer number of smoke particles a fire can release. An orange daytime sky tends to have similar connotations. If you notice a yellow sky in the middle of the day, there is a strong chance that somewhere nearby is burning up.

3. You might have just gone through a major storm

Another reason why you might have an orange sky deal with the aftermath of a storm. Did the National Weather Service recently alert you to a big storm in your area? If so, then don’t panic. An orange sky is quite common after a storm.

Don’t worry, this isn’t a sign of bad times to come. It’s just the sky showing a little bit of drama in its own way. On a similar note, this could also be a sign that your personal life just weathered a storm of its own. Thankfully, that means it’s over for now.

Orange is a fiery color that most people associate with energy and (at times) a little chaos. Sometimes, chaos can be a good thing. When you see orange sunrises or sunsets, do you feel energized? If so, just “drink it in.”

Orange has been a symbol of energy and warmth for ages. If the sunset or sunrise you see gives you an uplifting boost of energy, then the meaning of your orange sky is simply that the universe is giving you a cup of proverbial coffee.

5. This also could be a warning of a shakeup

If you dreamt of sunlight with an orange hue, you might want to check yourself. Seeing an orange sky in a dream could be a warning that you might incur some chaos, or even find yourself in a dangerous situation.

Did you feel scared in the dream? Was something just not right? In many cases, you can tell what a dream means by the way it makes you feel. The more unsettled you feel, the more likely it is that you should try to keep an eye out for dangers that you ignored before.

If you’ve been going through a lot of shakeups and obstacles, then it is likely that dreaming of an orange sky is your mind’s way of illustrating all the craziness of life. You might also want to control the chaos. Don’t do it! It’s better to just let the chaos happen, at least for a while.

6. You may need to persevere during the hard times in your life

In the Bible, the color orange is associated with a fiery passion, God’s flame, and at times, danger. This could be a sign that troubling times are ahead, but that you shouldn’t get too scared. You will need to persevere and “weather the storm.”

While things will get worse for a while, you should assume that there will be a blue sky with a rainbow at the end of the ordeal. Orange may be a scary color to see, but it doesn’t mean that you should give up faith.

7. You might be getting a dose of spiritual refreshment

Though there tends to be a theme of negativity surrounding an orange sky, you shouldn’t always take it as a sign of bad things to come. If you feel uplifting energy around the sky you see (or dream of), it could be a sign that the universe wants you to feel refreshed.

According to SymbolismAndMetaphor, this is a good indication that you’re in for a mini-vacation. In other words, this is a spiritual sign that you’re going to get a well-deserved rest, or a metaphorical glass of water after walking through your own personal Sahara desert.

8. Someone is trying to harm you

While there can be a benevolent omen to obtain from dreaming of an orange sky, you still need to remember that this is a color that tends to be associated with warnings. In dreams, an orange sky could mean that danger is afoot.

One of the rarer beliefs related to orange sky dreams involves a warning that someone may be out to get you. Has someone at work been giving you the stink eye? Perhaps you’ve been getting a dodgy vibe about a friend that’s been acting strange with you.

If you believe in a dream being a bad omen, then this might be a pretty bad indicator of things to come. Simply put, it’s best to take anything your “friends” say with a grain of salt, especially if you get that bad feeling in the pit of your stomach.

9. You’re in the mood and looking for love

Orange, pink, and red are some of the most fiery colors of the rainbow. When you dream of a sky filled with orange, pink and red, chances are that those rosy, passion-filled colors tend to reflect your mood.

Reds, pinks, and oranges are all different colors that are warming and associated with amorous activities. A dream where you’re walking through a red planet or something similar suggests that you might be searching for romantic or sexual love.

This meaning is more of a reflection of your mood and mindset than anything else. There’s no omen or sign of love around the corner in this dream, but who knows? Maybe it’s a sign you’re going to change your outlook on romance.

10. You’re going to undergo affliction and trials in the near future

An orange (or brightly colored) sky is a sign of bad things to come. Yellowish-orange skies can mean sickness. Reddish skies tend to denote bloodshed. A mix of the two means that you’re going to face serious trials soon.

To a point, this falls in line with many other dream interpretations of its kind. However, there’s a little nuance to this one that makes it unique in its stance. With this interpretation, it doesn’t necessarily say that you will overcome whatever is going to come in your way.

Rather, it’s just a test. You can pass, or you can fail. When in doubt, keep an eye on the prize of overcoming adversity. Whatever you do, don’t try to succeed through underhanded means. It’s more likely to backfire than you might think!

Did you recently find an orange sky in your life? Or, was it a dream of a tangerine-colored sky? Tell us your experiences below.