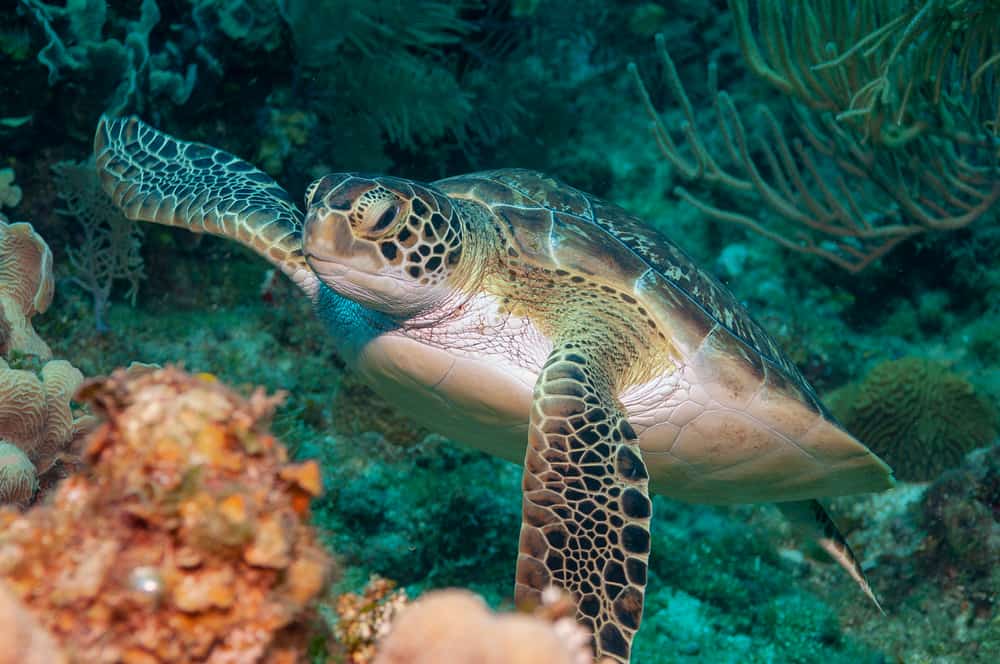 A turtle symbolizes many things, nearly all of them being positive. It includes patience, wisdom, longevity, courage, and good health. However, what does it mean in a dream?

In this article, we’re going to see what place turtles have in myths around the world, and share interpretations of some of the most frequent dreams about turtles.

As turtles aren’t usual creatures, we can find them in many legends and myths all around the world.

In ancient Mesopotamia, a turtle was a symbol of Enki, one of the principal deities in the Akkadian religion. Enki was the god of creation, intelligence, water, crafts, fertility, and much much more. As a result, turtles were respected and worshipped animals, even being featured on boundary stones among religious inscriptions.

In antiquity, a turtle was associated with Aphrodite, the goddess of lust, passion, and fertility. As a result, a turtle was a symbol of fertility in itself. Additionally a Greek storyteller Aesop is the author of a famous fable about the race between a tortoise and a hare, teaching that slow and steady wins the race.

3. Cosmic Turtle or The World Turtle

Many cultures around the world, including Hinduism, Ancient Chinese, and Native American, have legends about the Cosmic turtle which supports the world. For example, Hindus call it Akupāra. On its back, it supports 4 elephants that carry our world on their backs. It associates turtles with mother earth and the eternity of existence.

Turtle Dream Interpretations By Your Actions

Now it’s time to look at dream interpretations by how you behaved toward the turtle. Keep in mind that you shouldn’t blindly follow or believe the following meanings. These interpretations should act as a compass that helps you find the right meaning that’s unique to you, instead of being a map that shows what the exact meaning is.

1. The Meaning of Feeding a Turtle

A dream where you feed a turtle symbolizes your personal and spiritual growth. Maybe it’s a mark of approval for the universe for succeeding in sorting out your emotions, feelings, desires, and fears.

2. The Meaning of Petting a Turtle

Dreaming about petting a turtle or having a pet turtle is usually a good sign, symbolizing your growth and development as a person. People usually have such a dream after picking up a new hobby, starting a new relationship, or becoming closer to God.

3. The Meaning of Running Away From a Turtle

If you have a dream about running away from a turtle, it means that you’re not dealing with obstacles in your life and that you’re running out of time to do the right thing. Such a dream could be a very significant warning from the universe, so be aware.

Now it’s time to interpret some of the most frequent dreams about turtles by the way they behaved:

1. Turtle Hides In Its Shell in Dreams

Dreaming about a turtle that is hiding in its shell is associated with feelings of insecurity. The shell is its comfort zone and the thing which protects the turtle. So, if it has retreated inside, it feels vulnerable and in danger. Such a dream could be a signal that you’re just like that in your waking life.

Maybe you’re being tortured by your inadequacies, insecurities, and shortcomings, which make you retreat from the rest of the world. In a similar vein, some people have such a dream after ending a long-term relationship, be it platonic or romantic. Losing a close person can leave you feeling alone, and well, vulnerable.

A dream about a turtle hiding in its shell could also be a signal from above that you should take a step back from whatever situation you’re currently involved in. The possibilities are endless, but for example, you might be wasting your time and health working overtime on some new project at your job, or are micromanaging every tiny detail of your wedding.

Such a dream could be your subconscious telling you “Hey, everything is all right. Take a deep breath and just observe things for a moment.”. These days it’s very easy to get lost in the daily chaos and forget about giving yourself some personal space and time to rejuvenate your body, soul, and psyche. Sometimes it’s okay to hide in your shell!

While a turtle is seen as the epitome of slowness, they are actually pretty quick in the wild. So dreaming about a turtle that is moving at a slow pace could be a sign that you’re falling behind in life and delaying your personal development.

Maybe you haven’t started going to the gym despite having it as your New Year’s resolution five times in a row. Maybe you haven’t finished that painting you started last summer. Or maybe you’re still not having children after 10 years of marriage.

Whatever that “maybe” is, this dream could be an encouragement from the universe or your subconscious, that you should hurry up.

If you have a dream about a turtle that is moving fast, it could represent that your life is full of anxiety. You could be running on autopilot, hurrying and rushing everywhere you go and everything you do.

We all know that cliche scene from the movies where a character is late for work and leaves home with toast in their mouth for breakfast. If you always relate to that scene, and just had a dream of a turtle speeding, you should take a moment for self-reflection.

Being mindful is incredibly important for long and happy life. Most of our stressors aren’t even that important, but it’s just that we haven’t taken a moment to think them through.

Turtle Dream Interpretation By The Type of Turtle

There are over 350 different species of turtles! If you remember what type of turtle you had a dream about, it could be a useful indicator helping to understand the meaning of the dream:

Turtles are usually depicted as green, and this color specifically embodies the core symbolism of a turtle – long life, health, and wisdom. If you had a dream of a green turtle, it could signify that you’re improving your overall well-being, and taking care of your body and mind.

Snapping turtles are carnivorous, meaning they prey on other animals and eat their flesh. Their mouths are shaped like beaks, which together with powerful jaws can generate immense force.

In a dream, it represents boundaries, because if you cross the line of its mouth and appear in the middle of its snap, you’re going to lose what went beyond the boundary. Such a dream could be a signal that you’re crossing some boundaries that you shouldn’t cross, especially if you end up being bitten.

Contrarily, it could indicate that you aren’t setting boundaries and some people are taking advantage of that.

If you have a dream about a sea turtle or a turtle swimming in the water, it has something to do with your spiritual world or the unconscious part of your psyche. Water, especially if it’s muddy water, is the ultimate symbol of the unknown, and a turtle represents your inner state of mind.

Maybe you’re ignoring your weaknesses and lying to yourself, rejecting your shadow, the dark side of your personality. It’s a natural thing to do, but not accepting a part of yourself that you don’t like gives it more power to influence your conscious mind and behavior.

Dreaming not about a turtle, but about its empty shell can have multiple meanings. The shell itself symbolizes strength, protection, and peace. It could be a warning sign that something is about to happen which will require you to have a “shell”, or that you already possess such a shell and should keep persevering.

Having a dream about a turtle that appears to be dead isn’t the most pleasant experience, but it’s not necessarily a bad omen. It could mean that something in your life is about to end, be it your romantic relationship or a business endeavor.

While endings are not always a good sign, it’s a sign nonetheless. Specifically, it’s a sign of change, and we should embrace it with open arms.

A dream about baby turtles or turtle eggs could symbolize a spiritual rebirth or a new chapter in your life. It could be that some new opportunities will come your way, or that you’re about to start a new life. If you’re already thinking about radically changing your life, it’s a sign of encouragement from the universe that you should do it.

Baby turtles and turtle eggs also symbolize fertility, so such a dream could be a sign from the universe that your family is about to become bigger.