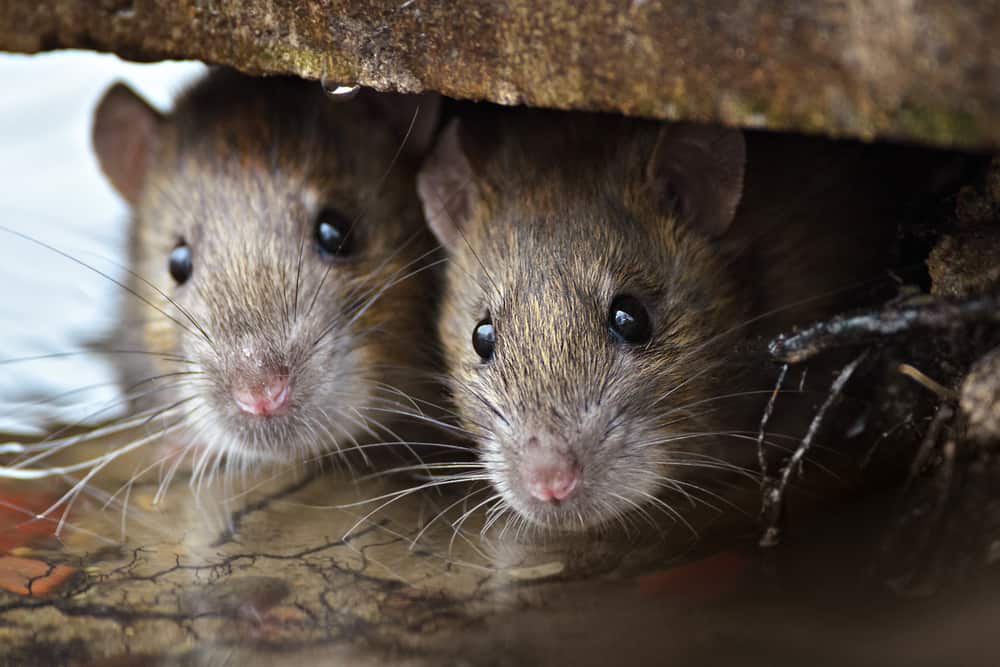 A rat is one of the 56 species of rodents that belong in the genus Rattus. The difference between rats and mice usually comes down to their size, as rats are typically larger than mice. Rats live alongside humans as opportunistic survivors. This means they benefit from humans without hurting them most of the time.

Due to their opportunistic nature, you can find rats throughout the world, except for Antarctica, where the weather is too cold, and the human population is low. Therefore, it is no surprise that the dream of rats is one of the most common themes.

But what does it mean when you dream about rats? Are these dreams always bad, or can they positively affect you? If you want to know the answers to these questions, keep on reading!

In this article, we’ll examine rat dream meanings and what it symbolizes for you and your future.

What Does It Mean When You Dream About Rats?

The primary symbolic meaning of seeing a rat in your dreams is bad luck and an omen of bad things to come. This is primarily due to the association of rats with damage, rot, and disease. Rats are known to be carriers of many diseases, which are often very dangerous to humans.

In fact, it was believed that the black rats of the Middle Ages were the main reason for the spreading of the Black Plague. However, a recent study has challenged this theory. According to the study which simulated bubonic plague outbreaks in large European cities, the most likely transmitter of the disease was lice and fleas that were present in humans.

Another dream interpretation for a rat is fear. Maybe you fear rats because you had a bad experience with one at a young age which still gives you nightmares. Other people are disgusted by rats since they usually live in the sewers.

Additionally, since rats don’t want to be around humans, seeing a dream about rats might signal that you are uncomfortable around people. You might need to understand whether your issues arise from certain circumstances or specific people.

You should also remember that dreams are very personal and subjective. What is a negative symbol for most could be a positive one for some individuals. For people who have a good relationship with rats -because they have a pet rat, for example- a rat dream might signify good luck.

Here are some specific cases of rat dreams and the meaning behind them:

Seeing a dead rat in your dream is usually a sign that you are afraid about things in your life. This fear could be related to one of your superiors at work. You could also be scared of losing someone close to you.

A dead rat could be a symbol of death in a relationship or friendship with someone you have been close to for a while. Maybe things haven’t been going that well for both of you, and it might be time to put that relationship behind you.

Rats are also considered spiritual messengers of the afterlife. If one of your loved ones passed away recently, that rat in your dream might be trying to give you a message from them. It could also be that the death of a loved person is imminent, so be prepared for it.

2. A Rat Running Towards You

If your dream includes one or several rats running toward you, it is actually a sign that one of your beloved people might be getting away from you. It could be a friend you haven’t spoken to in a while, a romantic partner, or a family member with whom you are growing apart.

If this dream persists, you should deeply consider which people in your life are important. Is one of them gradually slipping away from you? If so, do you want them gone, or do you still want them around? Relationships require effort from both parties in order to be maintained, so don’t let them leave if you still want them by your side.

Another interpretation of this dream is your fear that your income will be damaged or you will lose your job. Perhaps you haven’t been as diligent lately, and your subconscious mind fears that you may need to look for a new job. If you don’t want that to happen, you need to put more daily effort into your work.

3. A Rat Chasing You

Being chased by a rat is a very common dream that has most people waking up in fear. One common explanation of this dream is that you feel insecure about your income and fear that life’s obligations are chasing you. It might be time to cut down on your daily expenses or find some ways to increase your earnings.

Since rats are often related to illnesses, a rat chasing you might indicate your fear of sickness or even a fear of death. If you feel like something may be wrong with your health, you should check it out immediately and not postpone it until it’s too late.

Dreams of rats chasing you might also be due to a fear of betrayal. Maybe you have been betrayed before and are afraid it might happen again. It could also signify unfinished business with people from your past or deceased individuals.

Dreams of rats biting you are usually a sign of betrayal. If the rat bites your hand in particular, it could be a close person trying to betray you. If the biting is constant but painless, it could signify that some person has been trying to get your attention for a while.

If the rat gives you small bites in several different places of your body, an issue you have needs your attention, but you have been avoiding it. These issues are usually small health problems like a bad tooth. But, it could also be something significant, so you better get to it as soon as possible.

A dream about a biting rat is also very common among people with Obsessive Compulsive Disorder (OCD). If the rat in your dream is nibbling on your skin, it could also be a warning about financial issues in the near future.

5. A Rat Crawling On You

If a rat crawls on you in your dream, it could be a sign of mistrust towards your partner. You may have questioned their fidelity before, but your concerns have not been amended yet. It could also be a sign of guilt about you having a secret affair while you were with a previous partner or your current one.

Also, since rats are often associated with dirtiness, a rat crawling on you could be a sign that you want your partner to be cleaner. If you have a such concern, you should talk it through with them and find a solution. You could also be fearful of catching a sexually transmitted disease (STD) from a sexual partner.

Another symbolic meaning of a rat crawling on you could be your fear of losing control over your health or your diet. You feel your bad habits creeping up on you, even though you have tried so hard to get rid of them. Stick to your plan, avoid temptation, and you won’t have any trouble.

Apart from their general meanings and symbolisms, different-colored rats can signify different things. The most common colors of rats in dreams are black rats and white rats. Black rats have always been associated with grave illnesses like the Black Death and dark emotions.

Thus, it is no surprise that black rats in dreams are omens of sickness, death, anxiety, betrayal, hopelessness, and evil.

Thanks to their color, white rats often have a more positive meaning than other rodents. They symbolize hope, life, strength, and spirituality. If you spot a white rat in your dreams, it could be a sign of your spiritual awakening.

Other rat colors include brown and gray. Brown rats are viewed as dirty and unattractive. They symbolize insecurities about appearance and body image, as well as health issues. Gray rats are more muted and neutral. They are often regarded as symbols of depression, anxiety, and contradiction.

The eyes of rats in dreams can also have significant meaning. A rat with red eyes is believed to be an embodiment of a demon or an evil spirit. It is associated with dark emotions and the underworld. On the other hand, a rat with green eyes is considered an omen of good fortune, financial security, and happiness.

All in all, rat dreams are very common and have very specific symbolic meanings. For most individuals, a rat dream induces negative emotions like fear, anxiety, and depression. However, a dream with a rat can have a positive impact if you share a positive relationship with these creatures in your waking life.

In any case, consider this dream guide about rats, try to overcome your inner issues and obstacles in real life, and achieve your life goals.