Skip to content
Liquids and Solids » What Does It Mean When You Dream About Zombies? (10 Spiritual Meanings) 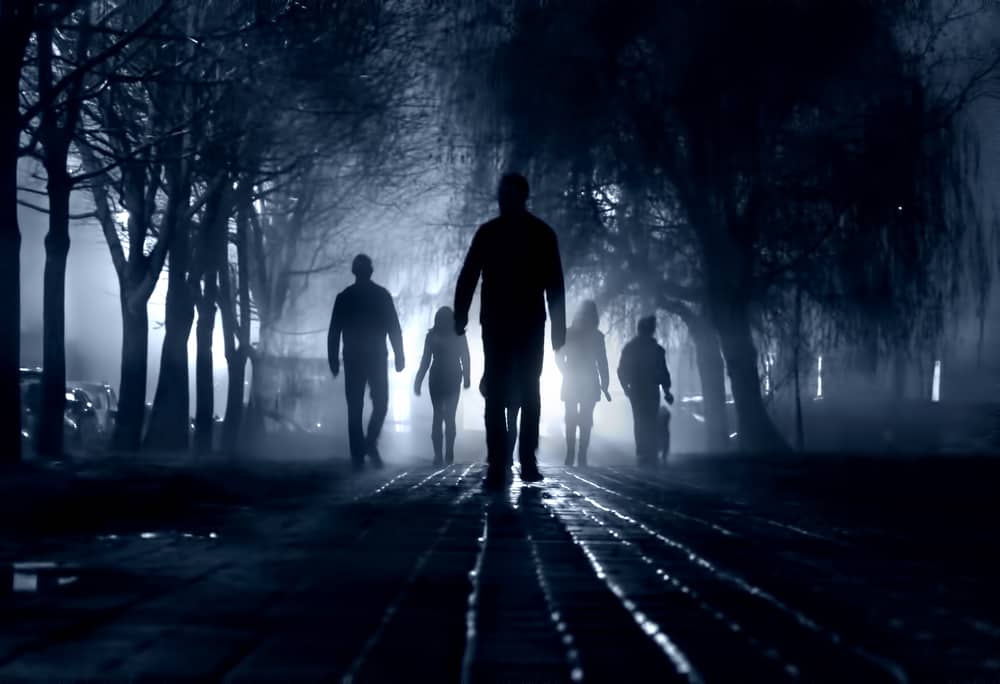 Whether you’re a zombie enthusiast or not, if you’ve ever dreamed about them (zombies, that is), you’ve probably felt shocked and afraid.

But after the initial shock wore off, you may start wondering about the more profound meaning of having dreams about zombies. So, what does it mean when you dream about zombies?

The Symbolism Of Zombies

Zombies are walking dead bodies that lack the ability to think for themselves, according to zombie movies. They are controlled by an outside force and must obey orders from those who created them. Your subconscious mind may be trying to tell you that there is a part of yourself that needs to be controlled or contained.

The term actually comes from Haitian folklore, in which a zombie is a dead body and is reanimated through various methods, most commonly magic.

Modern depictions of the zombie do not only involve magic but also often include science fictional methods such as carriers, radiation, mental illness, or experiments gone wrong.

The zombie is the transformation of a human into an undead being. It is not very intelligent, but it has an insatiable appetite for human flesh. Zombies are typically portrayed as mindless, shuffling creatures with no personality or intelligence. According to popular belief, a zombie outbreak is usually caused by some sort of zombie virus.

The zombie apocalypse is a fictional end of the world in which the dead rise from their graves and attack the living (zombies). The zombie apocalypse has become popular in modern culture because it allows us to imagine what would happen if we were faced with an unknown threat and how we would react to it.

You may be experiencing a lot of pressure from others, or feeling like you have no choice but to give in to the tremendous pressure of what everyone else wants.

In this case, being surrounded by zombies as a dreamer means that you are surrounded by people who make you feel like you are not doing enough or not being good enough.

Zombies also appear as symbols of social conformity and mass consumerism — both concepts that have become increasingly prominent in the media over the past few decades.

The idea of zombies is so powerful because it represents mindless conformity: Everyone looks the same, acts the same, and thinks the same way — it’s a perfect metaphor for what happens when we allow ourselves to get caught up in trends and fads without thinking for ourselves.

Perhaps a change of perspective can help you get rid of misunderstandings and escape the cruel reality you’re facing. The zombie dream’s meaning can be as much or as little as a warning sign to break free from your current state and search for a new beginning.

2. You are losing control

In general, zombie dreams can mean that something is “dead” in your waking life — it may be an idea, worries about your relationship, or a job. You may be feeling like you have no control over your emotions or actions.

The zombie is a symbol of the shadow. The shadow represents our inner demons and our unconscious mind. It even stands for the loss of innocence.

If you dream of being chased by zombies, you may have some deep-seated fears about the future. You might be afraid of losing control over your life or possibly even dying prematurely.

3. You lost your energy

Zombies are a popular theme in horror movies, but they also appear in our dreams as symbols of physical and emotional exhaustion. In dreams, zombies typically represent our lack of energy or interest in things that used to be important to us. If you dream about zombies, it might be time to take a break from your routine and recharge your batteries.

If the zombies are running toward you, it can mean that you are feeling overwhelmed by your responsibilities.

4. Your mind is being invaded

In dreams, zombies symbolize our inner fears about being controlled by outside forces or other people’s desires for us. We often fear losing control over our lives and being forced into doing things we would rather not do.

The idea of being chased by a mob of zombies can symbolize feeling overwhelmed or helpless because there are too many things happening around you that seem impossible to control or prevent from happening.

The dream of a zombie may even refer to childhood memories of being afraid of something that was not real, such as monsters under the bed or in the closet.

Typically, children will tell their parents about these monsters and then get so scared that they continue having nightmares long after they have stopped believing in them.

5. A loved one is driving you crazy

Dreams involving zombies can be a reflection of how you feel in your waking life. For example, if you dream about zombies attacking people you know, this may reflect how you feel about the people around you in real life (or vice versa).

In particular, dreaming about zombies may be a reflection of how you feel in an unfulfilling relationship or job.

For example, if you dream about zombies eating people, it could mean that someone has been trying to eat up your time and resources. If they are coming after you, then this means that someone is trying to take what is yours or attempting to hurt you in some way.

6. You lost the ability to make good decisions

If you dream of being attacked by zombies and killing them with your bare hands, this could be a sign that you are ready to make a change in your life and take control of your destiny once again.

Zombies are reanimated corpses that can’t be controlled. In dreams, zombies often represent a sense of being unable to control your emotions or behavior. It could also mean that you fear letting go of bad habits or a relationship.

7. Something is sucking the life out of you

Occasionally, the main idea behind this dream is that something or someone is sucking the life out of you. This could be a job, a relationship, or simply a feeling of being stuck in life.

You may feel like you’re going nowhere, and it can be very frustrating. If you are dreaming about zombies, it means that someone or something is draining your energy or has a negative influence on you.

If a zombie is attacking you, it means that you need to be careful of those around you who are trying to drain your energy.

If a zombie attacks someone else and not you, then it means that someone close to you is being drained by another person or thing.

If a zombie bites you without you feeling anything, then it may signify that someone close to you has a bad influence on you, and your subconscious is warning you.

8. You’re afraid of losing someone

The zombie in your dream may be an important person in your life who has recently changed, such as a spouse who’s lost their job or an ex-lover who’s moved away. Or perhaps you’re facing some kind of major life change yourself, such as moving away from home or starting college.

You may be worried that they will leave you and never come back again. This dream could also be telling you that you don’t have time for all the distractions in your life right now; you need to focus on what’s most essential.

Alternatively, if you’re feeling overwhelmed by stress or anxiety in real life and having trouble coping with it all at once, then dreaming about being a zombie may help you process those feelings instead of burying them inside yourself.

The idea behind this interpretation is that once you confront these emotions head-on in your dream world, they’ll lose their power over you in real life too.

10. You suffer a lack of motivation and negativity

If you dream of zombies, it can mean that there is some negative energy in your life that needs to be addressed and removed from the equation.

Perhaps the person who is causing this negative energy to manifest is a friend or family member who is always complaining about everything, so much so that it makes you feel like giving up on life. The impact of other people’s opinions can be overwhelming.

Zombies represent the darker side of humanity — mindless drones who are only concerned with themselves and their survival at any cost. They lack creativity and have a strong desire to fulfill only their basic flesh-eating instinct.

They’re people who have absolutely no regard for others (including friends and family) unless it benefits them somehow in some way shape or form. Even if it’s just for amusement or pleasure for those who are watching them do these things.

Your interpretation of zombie dreams will depend on the zombies in question, and what they represent in your waking life.

Zombies are a common trope in our shared cultural spirit of the times, but they have been used to symbolize everything from disease to consumerism to isolationism.

And we’re not just talking about the living dead here—zombies are also used as a stand-in for your everyday people too. You could have a zombie boss at work, for example, or a zombie teacher at school.

Zombies are not going anywhere, and we’re certainly not done dreaming about them anytime soon. They get more popular every year, with television shows and movies like The Walking Dead bringing them to the front of our minds constantly.

But if you figure out the meanings behind those zombie dreams, you could do better in your waking life.