Skip to content
Liquids and Solids » What Does it Mean When You Hear an Owl? (14 Spiritual Meanings) 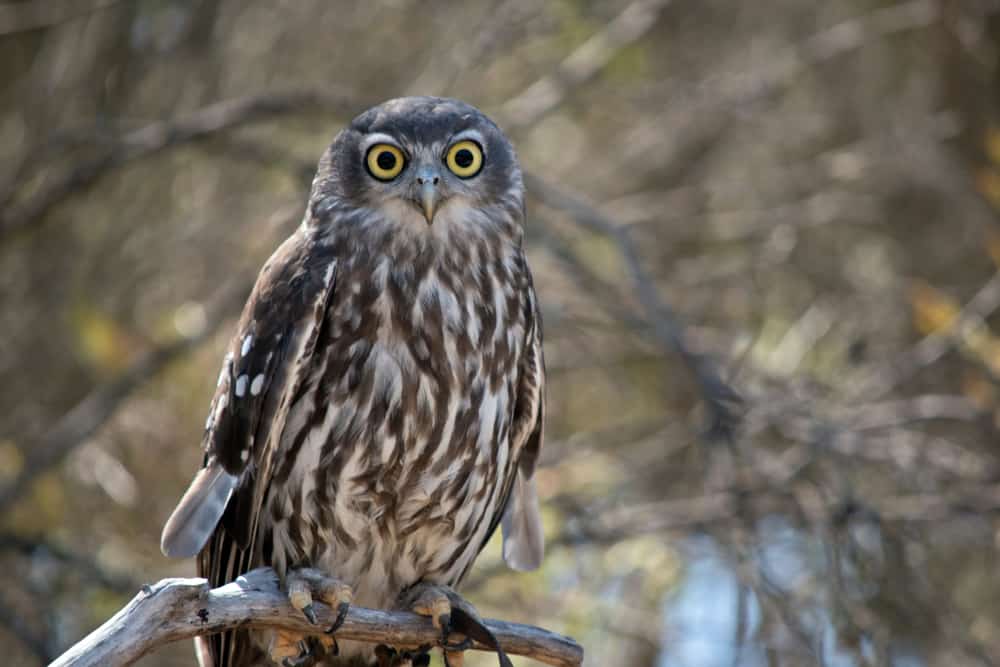 Birds have always been some of the most symbolic and meaningful animals to experience. But something special and unique to each species is, of course, their song.

The haunting sound of an owl’s hoot can be alarming. It’s not as sweet or melodic as other birds, yet there’s something hypnotic about it. What exactly does it mean?

Throughout history, owls have suffered from huge superstition, often symbolizing bad luck and death. But what if we told you there’s more to an owl’s call than meets the eye?

What Does it Mean When You Hear an Owl?

Today we’re going to investigate the true meaning of hearing an owl in your life. We’ll explore the various symbols and how you can interpret them.

First and foremost, the owl is a symbol of wisdom. Throughout time, they were often associated with creative thinking, clarity, and concentration. Many cultures considered them sacred, celebrating them because of their heightened senses and hunting prowess.

Although high-pitched and piercing, the owl’s call is an incredibly compelling message. We immediately stop, stare and listen when we hear it. This is the owl sending you a message of knowledge.

The owl equips you with solutions to life’s big problems. Hearing it forces us to reflect on our lives, concentrate, and think creatively. Being receptive to their hoots can enable you to find answers to all of life’s big questions.

Darkness is often a symbol of clouded vision, of being lost, afraid, and alone. When we can’t see, we don’t know where we are going or what dangers might be in front of us.

But as a nocturnal bird, the owl thrives in such circumstances. It uses its excellent hearing, keen eyesight, and silent wings to hunt and keep safe. So when our vision fails us in life, the owl’s call at night symbolizes protection and guidance.

Hearing an owl at night can represent you gaining a new direction in life. You aren’t sure where to go right now, but the owl has a plan for you. Its hooting can guide you, bringing you from one place to another.

It can also act as a calming sound. The soft hoot of the owl is something familiar. We might not be able to see the owl, but our ears are our strength when our eyes fail us. Trust in the owl’s call to navigate life’s troubles and dark times in times of darkness.

That said, an owl’s call can also come as a shriek. This call-out is often a warning. Again, the owl wants to help you traverse the dark times in life. Adhering to its advice can help ward off potential dangers and keep you safe.

Because most species of owl are nocturnal, hearing one call out during the day is especially significant. And no doubt you will be taken aback by its rare sound.

Hearing an owl call out during the day is a blessing. The owl is defying its own natural cycle and rhythm to bless you.

We can see the path before us when the sun is high in the sky. But the owl wants to give us some additional information. Perhaps you can’t trust what’s ahead of you. Instead, you need to think carefully and clearly.

The owl knows all of your secrets. Its hoot calls you to action to address areas of your life you want to keep hidden. Listen carefully, and self-reflect. Perhaps all you need to conquer your insecurities is a fresh perspective.

During mating, owls often duet each other, blending their calls into a surprisingly beautiful tune. Females will answer the call of male owls once they are provided with food as proof the male is worthy.

As such, if you hear the calls of a dueting pair of owls, this can reflect your current relationships. You are in harmony and are faithful to one another.

5. A call for rebirth

Since the beginning of history,l the owl has always been a symbol of death, transformation, and revival. Ancient Egyptians, for example, saw it as a traveling spirit that meant ancestors were reaching paradise.

Don’t be alarmed if you hear an owl’s call – this does not mean you’ll die. In fact, quite the opposite.

Look to its call as heralding a significant change in your life. Perhaps you’re feeling stuck right now. Life may have come to a crossroads. The owl’s hoot beckons you to transform and reinvent yourself.

The ‘death’ from which an owl foretells is the death of the old you. A part of you that’s holding you back. Don’t be afraid of the owl – the afterlife is your future.

Despite being agile hunters and often apex predators in their habitat, an owl will always roost in the safest places – just to be on the safe side. They usually build their homes in the hollow of tall trees or rest in dark, isolated caves.

As such, owls often are symbols of security. When you hear an owl near your home, this is a good omen that you are in a place of safety. The owl recognizes your home as a sanctuary built on sound foundations. It can also symbolize abundance. There’s prey aplenty, and the owl feels nourished living nearby.

An owl’s hoot often warns other birds; this is my territory. Keep away. Perhaps though, the life of an owl is quite isolating. Left to your own devices, you may begin to feel lonely. If you long for companionship, perhaps the owl’s hoot is a wake-up call to meet new people.

7. An owl’s call in your dreams

Dreams are incredibly potent messages sent to us by our subconscious. How we experience and interpret dreams can unlock powerful emotions and resources.

Ultimately, an owl’s screech in your dream is an alarm. Its shrill tone and abruptness are a call to action. You have been putting something off for a while now. The keen wisdom of the owl is beckoning you to do something about it.

If you hear the owl but cannot see it, this can signify your need for direction. Follow the call of the owl in your life to find clarity and answers to pressing issues in your life.

If you feel scared at the call of an owl, this symbolizes your fear of change. But the owl is a positive symbol of rebirth – do not fear reinvention. Instead, embrace it.

What an owl’s call means in religion and mythology

We can learn much about the symbolism of an owl’s hoot by understanding their roles throughout history and how ancient civilizations interpreted them.

Especially if you are a member of a religion, or feel a deep connection to a pantheon of gods, here are some common interpretations of the owl’s call:

Owls were symbols of the goddess of wisdom, Athena. As such, they were often regarded as sacred birds and would be released just before the battle to bless the Greeks and ensure victory. An owl’s hoot was recognized as a fanfare – an omen of protection, guidance, and a sign of good fortune.

Owls were also associated with the roman goddess of wisdom, Minerva. However, their hooting also symbolized death and betrayal. A well-known example is the familiar story of an owl’s hoot prophesizing the murder of Julius Caesar.

Although birds were often revered in many Native American tribes, owls were treated differently. Because they traveled at night, they were commonly associated with mischief, death, and the supernatural.

Their hooting is widely linked to ghosts, evil spirits, and misfortune, as they were only heard when light and darkness clashed.

The Celts believed owls represented death and despair, as they were only seen at twilight. Because they could be heard but not seen, Celts grew suspicious of their supernatural abilities, considering them a bad omen.

They were often linked with witches, negative energy, and periods of sadness in life. The Irish word for a barn owl is ‘scréachóg reilige,’ which translates as ‘screecher of the cemetery’ because they often were heard at grave sites.

Similarly, in Mayan mythology and culture, the owl’s screech was often interpreted as a symbol of death and the traveling of lost souls. They feature in two prominent creation stories, both of which feature the owl as a messenger of the underworld.

In Hinduism, owls are linked to Lakshmi, the goddess of wealth. As such, their hoots are seen in a very positive light. Hearing an owl is a good omen and signals immense wealth and good luck coming into your life soon.

Owls appear several times in Christianity. The most commonly cited verse containing owls is Jeremiah 50:39, which uses them to symbolize loneliness, desolation, and sorrow; ‘So desert creatures and hyenas will live there, and there the owl will dwell. It will never again be inhabited or lived in from generation to generation.’

There is no denying that the spiritual meaning of an owl is enormous. Encounters with these birds are often very poignant and mark a significant crossroads in our lives.

Hearing an owl can be particularly symbolic. Their shrill hoot acts as a guide, navigating us through the dark times and providing insight, clarity, and certainty in times when we need it most.

As a symbol of wisdom, the owl’s appearance in your life ensures you have all the answers ready for life’s big questions over the coming days, weeks, and months.