Skip to content
Liquids and Solids » What Does it Mean When You Lose a Crystal? (9 Spiritual Meanings) 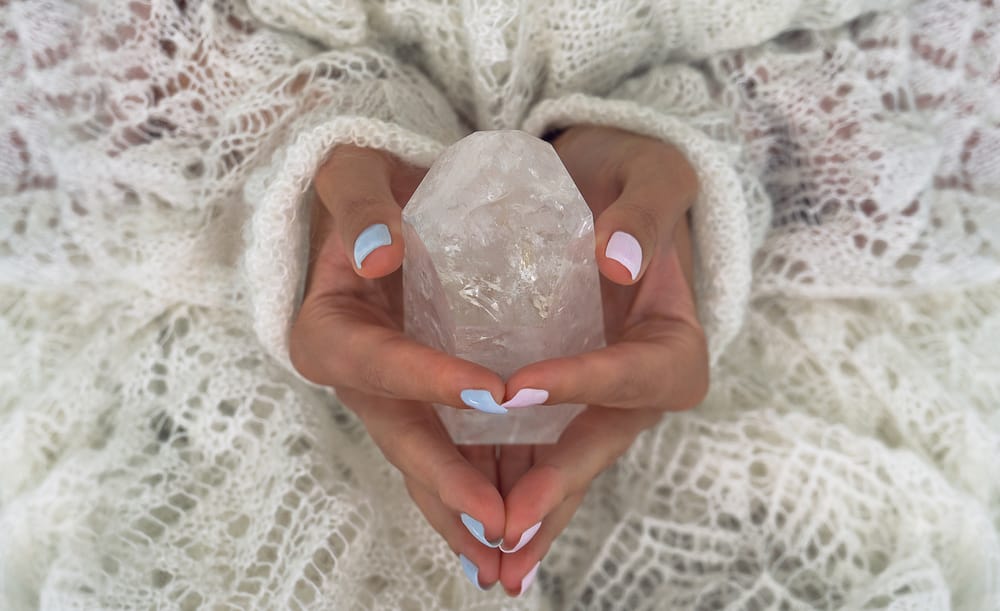 No one wants to lose their crystals, but from time to time, it happens or will happen to every one of us. In this article, we’re going to cover the meaning of losing a crystal, explain what it means if your crystal breaks or cracks, and finally present the main properties of some of the most popular crystal types.

What Does Losing a Crystal Mean?

Losing a crystal is always difficult, and there can be many potential reasons for it happening to you. However, the best thing you can do is to not blame yourself or think that something is wrong with you or your practices.

Here are some of the most common meanings of losing a crystal:

Every person and crystal emit vibrations of different frequencies. If your vibrations clashes with the crystal’s vibrations, it’s going to cause more harm than good. If that’s the case, the best thing that could’ve happened to you is what did happen – you lost it. So don’t grief about it and thank the universe for taking care of you and your wellbeing.

2. There Was Energy Dissonance

It could’ve been that there was a dissonance between your energy and the power of the crystal. Meaning that either the crystal was too weak for your intentions, and it couldn’t deliver on what you wanted it to, or it was too powerful, interfering with your spiritual energy.

3. Someone Else Needed It More Than You

Finally, it’s possible that you received everything you could from the stone, and it got free from you to find another person who needs it now. That’s why losing a crystal shouldn’t be painful, but rather peaceful.

You can carry the memory of it in your mind for a day or two, gracefully mourning it. Meanwhile know, that it did what was best for you and that it’s going to help a stranger out.

4. It Received Too Much Negative Energy

There’s also a possibility that you lost the crystal because it absorbed too much negative energy than it could handle. Once again, don’t be sad about it, because it means that the crystal sacrificed itself for your wellbeing, protecting you from the negative energies aimed at you. That’s also one of the most frequent reasons for crystals breaking!

5. You Simply Lost It

When we start manifesting and putting out our intentions and energy into the universe, it’s easy to forget that there are still accidents that are happening every day. There’s a chance that you simply lost your crystal, and that it isn’t some kind of sign from the universe.

What Does It Mean When a Crystal Breaks?

Every experienced crystal and gemstone lover had experienced their favorite crystal breaking apart. That’s one of the most painful things ever, especially if you have had a long history with your healing crystal.

However, in no way you should think that a crystal breaks or cracks because of something wrong that you’ve done. Even if you put in too much energy than it could absorb, causing it to break, it’s not your fault and is a part of the design that the universe has in mind for you.

That said, let’s take a look at some of the most common causes of crystals breaking:

Most often crystals, especially the smaller ones, crack after they absorb too much negative energy. Every stone has a threshold for the energy it can store, and once that threshold is exceeded, the crystal cracks or even shatters into tiny pieces.

If that’s the case, you shouldn’t be too sad about your broken crystal, but be thankful that you had it. The crystal was the magnet and the sponge soaking up everything that you shouldn’t. In a way, it sacrificed itself for your spiritual well-being, so be grateful for that!

If your crystal suffered a clean break, you shouldn’t worry much, especially if it was a bigger stone. Crystal pieces that broke off smoothly are still fully viable and capable of absorbing energy and taking in your intentions.

If it was a smaller crystal that had clean breaks, you can use its broken pieces in your pendants, amulets, or other articles of crystal jewelry. Such accessories would carry the essence of the crystal, and exhibit effects depending on the type of stone it was. Like all crystals, it can protect the wearer from negativity and bad luck.

Some crystals, specifically crystal clusters, have natural imperfections that are weak spots in their structure. In some cases, natural fractures could be spanning the entire body of the crystal. Such weak spots aren’t nearly as durable as the solid crystal itself, and over time give up from wear and tear.

You could wake up one morning to find your crystal broken in half. Such a significant event could make you think that it’s a significant signal from the universe. However, it could simply be that the natural imperfections of your crystal gave up and split.

It’s especially common with crystal clusters, which have many weak spots that are very fragile and can break just from day-to-day handling and regular use.

4. Carved Crystal Split in Two – Don’t Share a Half

If you have a crystal that is carved into a significant shape representing your spirit animal, god, goddess, or any other deity, you shouldn’t share its pieces in case it splits into two halves. At the first glance, it’s a beautiful idea, you share something meaningful to you with a person that you value.

However, such crystals embody something more than just the power they possess. Keeping two halves of a representation of the divine could attract bad energy, or even be punished by the represented deity itself.

What Does It Mean When You Find a Crystal?

It’s possible that you’ve come upon a crystal that someone else has lost. If that’s the case, there are two main options you can take. Sadly, they’re contradictory, and only experienced practitioners in crystal magic can feel which option is the right call.

Pick Up The Crystal – It’s a Gift From The Universe

If the crystal got lost because it thought it could serve you better than its previous owner, you should definitely pick it up. It’s the offering from the universe, and it could bring you many positive things.

There’s also a chance that the crystal got away from its owner because it got full of negative energy, and couldn’t take in any more. If that’s the case, you should never pick up such a crystal, because it would end up backfiring.

Types of Crystals and Their Effects

All crystals have healing properties, but the exact potential of a crystal depends on its type and size. Here are some of the most popular types of crystals and what they can offer to you:

Amethysts are usually purple crystals which are perfect for those practicing meditation. Amethyst can help you get into a state of mindfulness and become more aware in your daily life.

Angelite is a blue stone that, similarly to amethyst, enhances your mindfulness and awareness. It’s great for discovering your true feelings and emotions and setting them apart from things that aren’t true to your soul.

Clear quartz crystals are among the most powerful ones. This gemstone is known for its all-encompassing healing properties, promoting your physical, mental, and spiritual health. It also works as a magnifying glass, strengthening and amplifying surrounding energies.

Epidote is a yellow-tinted dark green stone that specializes in healing. It’s recommended to those who have recently gone through a difficult event in their life, be it a breakup, the death of a loved one, or any sort of emotional trauma.  Epidote is capable of uplifting and rejuvenating your spirit, helping to accelerate its healing process.

5. Rose Quartz – The Crystal of Love

Rose quartz is great at everything related to love. It fosters passion, loyalty, commitment, and love itself. This crystal can improve both, self-love and love toward others.

Lapis lazuli is a blue stone that is among the best at relieving anxiety, stress, and negative emotions. It can also serve as a potent tool during spiritual exploration.

Losing a crystal is always painful, but more often than not, it happened for your own benefit. If you just lost your crystal, don’t grieve too much, and express your gratitude to the universe.