Skip to content
Liquids and Solids » What Does It Mean When You See Crows? (9 Spiritual Meanings) 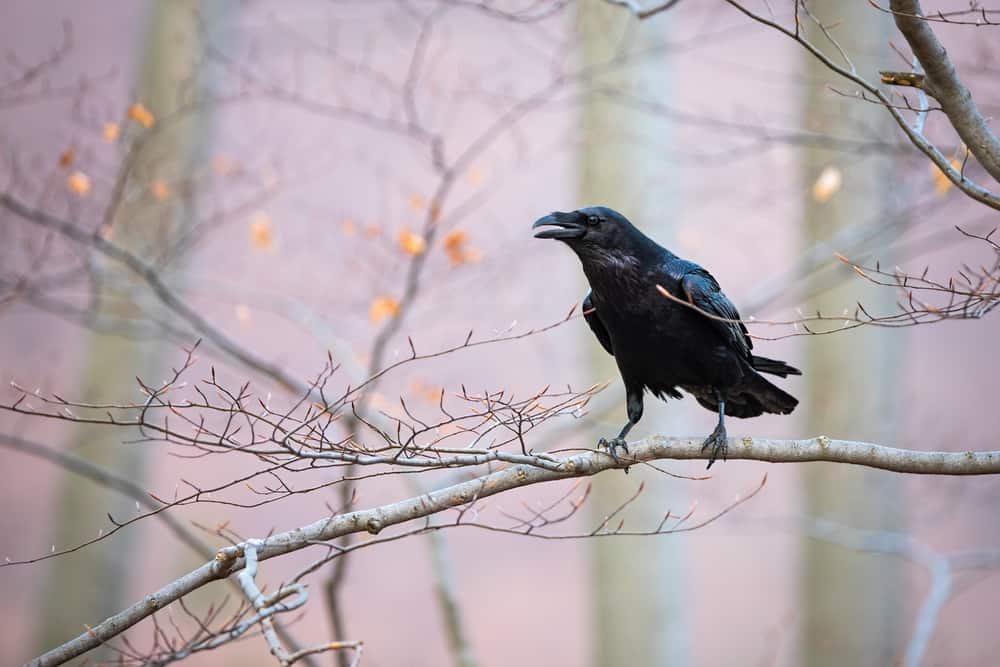 Crows are one of the most common birds worldwide and can appear in dreams as much as in our waking life. Throughout history, they’ve often been associated as a trickster,

So what exactly does the crow mean? And what is your subconscious mind telling you through this bird? Today, we’re going to find out.

This article will explore the different meanings crows can mean to you. We’ll also closely examine their relationship to several emotions and find ways to apply their appearance to everyday life.

1. You need to free yourself from something

Birds are natural symbols of freedom, and because the crow is an agile flyer, it exudes liberty and autonomy. When in flight, the crow can travel long distances and is not grounded by anything.

Seeing crows in flight is often an indicator that you, too, need to let go of something that has been weighing you down. By freeing yourself, you are opening yourself up to new opportunities and experiences.

Follow the crow’s example, and you can take flight and expand your own horizons. You need to forget any anxieties and throw caution to the wind; you can always return to where you once were, but right now,

2. You will go through a transformation

People may expect one thing from you – but you have many talents and are capable of much more. The appearance of the crow is beckoning you to be unpredictable and reinvent yourself.

In the bible, a crow was sent by Noah from the ark to find land. But the crow never returned, as it could survive by hunting on the sea. In this way, crows have always reflected versatility, quick thinking, and positive transformation.

Perhaps this relates to work, where you want to take on more responsibilities but is being overlooked. Or maybe someone in your life is taking you for granted? It’s time to surprise them, think outside the box, and be your true self.

3. You may need to re-examine your past

Research has proven that crows are some of the most intelligent birds, capable of memory, counting, and self-awareness. But crows have always enjoyed these attributes in the spirit realm. The main God of Norse mythology, Odin, had two crows; Huginn (meaning thought) and Muninn (meaning memory).

If we see the crow as a symbol of memories, then we must examine its actions closely. If the crow is flying away, you must revisit a past event or emotion and free yourself from it. Like the crow, move on for new experiences and fresh knowledge.

But if the crow is stationary, and stares at you, perhaps you need to spend more time reflecting on the past. Perhaps you need a new perspective on an old event? Maybe it’s time to reconnect with those we’ve lost contact with from childhood.

4.  You will triumph over a significant obstacle in life

In many cultures, crows are seen as wise messengers sent from divine beings to guide us on the right path in life. Celtic mythology is perhaps the best example, where the warrior goddess, The Morrigan (or phantom queen), guided the hero Cúchulainn through many obstacles that threatened his life. Crows were a sign of good luck that would help ward off evil in your life.

But as well as avoiding danger, crows have always been a source of courage and resourcefulness. In battle, the Morrigan would take flight and either inspire her warriors to victory or frighten foes with her sound.

In this way, channeling the crow as a power animal can awaken your own ability to do your best in challenging situations. Sometimes you don’t have to take a flight. Maybe it’s time you stick to your guns and stand by your convictions.

5.  You should trust your intuition more

Perhaps the appearance of a crow in your life is asking you to trust your gut instincts more and apply them to any problems you face.

In Greek mythology, for example, the god Apollo used his pet crow to spy on his lover Coronis and see if she was being unfaithful. The crow reported back to Apollo that she was having an affair.

Perhaps in the physical world, there’s a big dilemma in your life right now that you’ve avoided for a long time. The appearance of the crow suggests it’s time to take action. Trust in your own ability. You will overcome this.

6.  You may suffer the loss of a loved one

As carrion birds, crows and ravens have a natural affinity with death and mystery, which is reflected in several mythologies and religions. Sometimes this translated into them being bad omens, foretelling pain and tragedy.

And while many symbols of death relate to change and transformation, sometimes they are a bad omen of actual loss.

In Christianity, one of the earliest stories involves a crow, showing Cain how to bury his dead brother. Here, we can see that the crow symbolizes the afterlife, the morning of our loved ones, and let their souls rest in peace.

If you see a dead crow in your waking life or dreams, it is usually a wake-up call that you need to make changes in your life and put yourself first for a change – as your welfare is in peril.

7. You need your family and friends

Crows are incredibly social birds, preferring to live in communal roosts, spanning from a couple of hundred birds to a few thousand. As such, the crow symbolizes community, family, and prosperity.

When you see a flock of crows in nests, they feel safe and secure being together. This is a potent sign of abundance in your life, but not necessarily with wealth. You could be wealthy in other areas of your life, including good health, good career prospects, good relationships, or good fortune.

That said, if the sight of a flock of crows unnerves you and you’re feeling lonely, this can signify that you need to expand your social circle more. The crow beckons you to find your kin, make new connections, and finally feel comfortable living together and not apart.

8.  Someone may be tricking you

Throughout history and folklore, crows often appear alongside images of witchcraft, magic, mischief, and deception. Their black color and signature caw were often a symbol of something menacing going on in the area.

Seeing a crow could echo these ancient beliefs that there is something hidden going on in your life. The crow may be suggesting someone is being dishonest with you and that you only hear half the truth from them.

The crow knows what is going on, and hearing its caw could be an alarm for you to wake up and take notice of the situation. This isn’t a call to become paranoid – but you should keep an open mind about what other people’s intentions are right now.

Especially in work-related matters, don’t always assume colleagues have your best interests at heart. Remain suspicious of them until the caw of the crow leaves your memory.

9. Be wary – someone is taking something from you

Because they are opportunistic hunters, who either pick scraps off of other animals’ kills or eat farmer’s crops, crows and ravens have earned a minor reputation as symbols of theft and greed.

In several Native American tribes, the crow symbolizes selfishness, someone who tricks others into providing food for them. If we are to apply this interpretation, the appearance of crows in your life could signify that there is someone near you who might be taking from you.

This might relate to money, property, and possessions, but it can also apply to our emotions and time. Is there someone in your life taking more than they are giving? Are you being drained by someone? Perhaps like the crow, it’s time you let them fend for themselves for a change.

Crows are often misunderstood. Their grating cawing often annoys us. Their black feathers make us assume they’re bad luck. They arrive in such big flocks that they often seem like a pest for gardeners and farmers.

But if you examine the spiritual meaning of the crow, you will find that these intelligent birds are often symbols of wisdom, creativity, and triumph over evil. They are sending you a message, and you best be receptive to it.

Despite being found worldwide, do not take witnessing this bird for granted. By reflecting on crow symbolism, you can invoke their power and channel it into several areas of your life.