Skip to content
Liquids and Solids » What Does it Mean When You See a White Owl? (10 Spiritual Meanings) 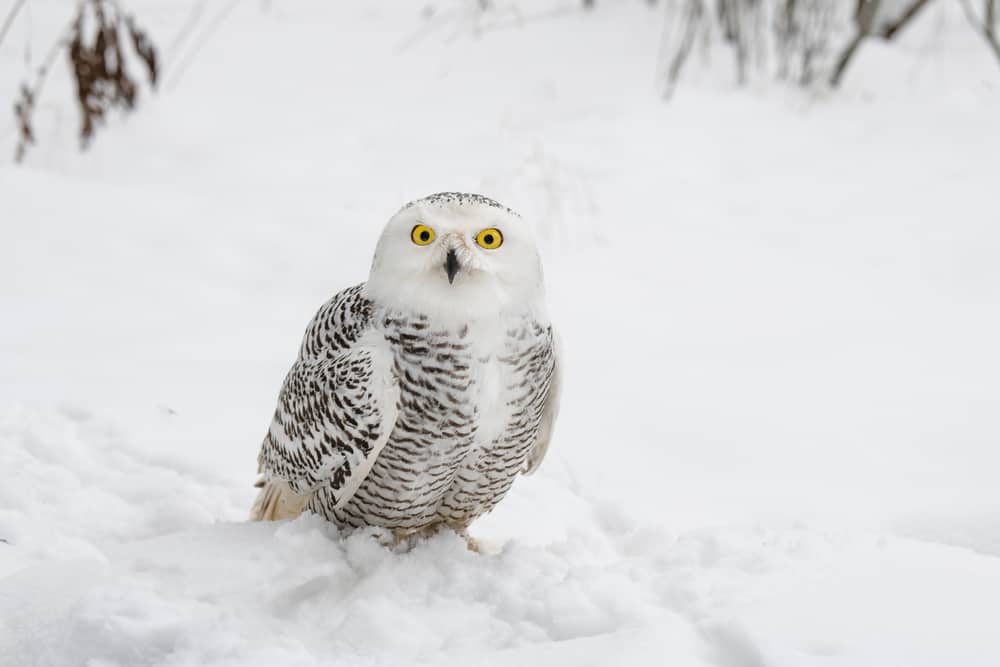 The white owl goes by several different names, such as the snowy owl, the polar owl, or the Arctic owl. It is one of the largest species of owls in the world and has distinct white feathers along with a few brown ones. The white plumage is more prominent in males, whereas females are usually larger in size.

The snowy owl’s habitat is tundra, which is native to the Arctic regions of the United States, Canada, Europe, and Asia. Despite its numerous lifestyle adaptations, the white owl finds itself being an endangered species due to several factors, including global warming.

So, what does the snowy owl symbolize? And what does it mean when you see a white owl in your path? If you want the answers to these questions, keep on reading!

In this article, we will explore the different symbolic meanings of owls and what it means when you see a white owl in real life or in your dreams.

What Does It Mean When You See A White Owl?

Owls are generally considered very intelligent animals. In fact, owls have one of the largest brains found in birds which is evident by their large head compared to their body. Thus, it is no surprise that owls are primarily associated with knowledge and wisdom.

White owls are often associated with good fortune. Its white color represents cleanliness, illumination, and hope. If you spot a white owl, you will be instantly filled with the confidence necessary to overcome life’s difficulties. Plus, the white owl will be by your side to grant you good luck.

Additionally, the white owl is often linked with witchcraft and wizardry. This is because of its prominent appearance in several fantasy stories, the most popular being the Harry Potter Series. In these magic books about wizards, a white snowy owl is the pet and companion of the protagonist and plays an integral part in the story.

Throughout the years, different cultures and civilizations have attributed other traits to owls. Here are some of the most popular ones:

In Ancient Egypt, the owl was considered a symbol of knowledge. In fact, the hieroglyph for the owl is the only one where the eyes face out of the page, whereas all other birds are drawn sideways. This was believed to be due to the owl’s exceptional perception. Owls were also associated with death and the afterlife.

In Ancient Greek mythology, the little owl (Athene noctua) was the companion of Athena, who was the goddess of wisdom, among others. It is believed that the goddess Athena was the patron and protector of the city of Athens, which is why the little owl is still the city’s symbol. It was also on the back of the first Greek one-euro coin.

Ancient Romans had given a unique meaning to the white owl in particular. They considered it a sacred bird, as they believed it feasted on the souls of the living during the night. It was also related to the goddess Minerva, which was the Roman counterpart of Athena.

Despite its association with good luck and good fortune, many Native American civilizations considered the owl a bad omen. Some tribes even believed that the white owl was actually a night eagle due to its size and ability to see in the dark. However, some tribes viewed the white owl as an ancestor who was protecting them.

Most Native American tribes considered the bird an omen of death and other dire circumstances. In fact, even hearing the owl hoots at night was a cause of concern for bad things to come. In some places, white owls were even related to ghosts. People believed that they gave the birds bony circles under their eyes to enhance their night vision in order to prey on the weak.

White owls also served as scare stories for little children. Adults would often scare children that a white owl would come down and take them if they cried or shouted during the night. This would prevent the kids from wandering off at night.

In Mexican-American cultures, owls are named after lechuza. The lechuza were a kind of shape-shifting witch that would appear at night and attack the weak.

What Does It Mean When You See A White Owl At Night?

Owls are nocturnal birds, which means they are primarily active during the night. That’s also when they do the majority of their hunting. Therefore, it is more common to spot an owl during the night than during the day.

Still, it is particularly rare to spot a white owl at night. In fact, some cultures believed that you could only find white owls at night if there was a full moon. Owls are considered animals of spiritual enlightenment, so if you happen to come across one at night, it can be a spiritual symbol.

White owls often symbolize your dark side in the spiritual world. If you spot one during the night, it might be time to do some deep shadow work to increase your self-awareness and grow as a person.

There are also plenty of superstitions surrounding the appearance of an owl at night. For instance, in Japan, if you see an owl flying close to your home at night, it could bring you good luck. However, you have to ring a bell nine times and wish for what you want.

What Does It Mean When You See A White Owl In A Dream?

Since white owls are rare birds that are only found in a few places in the world, you are most likely to see one in a dream rather than in reality. Still, the symbolic meanings of this bird remain the same. It could indicate that you need to strengthen your knowledge or express your creativity.

Nevertheless, remember that dreams are very subjective and could have vastly different meanings for different people. For some, the white owl could be a protector to help them guide against negativity. For others, it could be an omen of bad luck, similar to Native American tradition.

Consider what the owl means to you. Have you ever had an experience with an owl that shaped your life? Perhaps you were awed by an owl story when you were young. In that case, a dream about an owl could signify that you need to go back to the days when you were more carefree.

Spiritual Meaning Of A White Owl

Due to their uniqueness as a species, white owls are very important spiritual animals. Anytime you have a spiritual encounter with a white owl, it is a sign of good things. Also, the white owl enhances your intelligence and clairvoyance.

The white owl is an excellent spirit animal. Like any owl, it provides you the composure to take a step back and look at the bigger picture. You will be surprised at how many things you notice when you are not in a hurry. Use the power of the owl’s perception to figure out things in life!

The white owl spirit animal is also a symbol of honesty, innocence, and purity. It reminds you to always be honest with yourself and others. You cannot fool the white owl, as its vision and perception allow it to see through the lies and deception. Thanks to its vision, you will also have the clarity to avoid the lies and fabrications of others.

2. As a totem animal

If you have the white owl totem animal, you most likely have a strong affinity toward clairvoyance. Either you are already an established oracle or psychic, or you will soon develop those skills.

Also, the white owl totem provides calmness during intense situations. Difficulties and adverse conditions do not faze you as you always have the ability to remain calm and collected. When you need to make tough decisions, you do not let your impulses guide you, but instead, consider all options before deciding.

Additionally, you are not the most chatty person. Instead, your words are few and meaningful. You always know when to speak and when to remain silent, and what to say. People turn to you for advice due to your calmness and wisdom.

All in all, the white owl is a very unique animal. Its unparalleled insight and wisdom and uniquely-colored feathers make it stand out. The bird has also had a significant presence in symbolism and spirituality throughout the ages.

If you ever encounter a white owl in your path, know that it is usually a good omen and symbolizes wisdom, prosperity, and wealth. Embrace the hidden power of this majestic bird to fuel your path to brilliance!