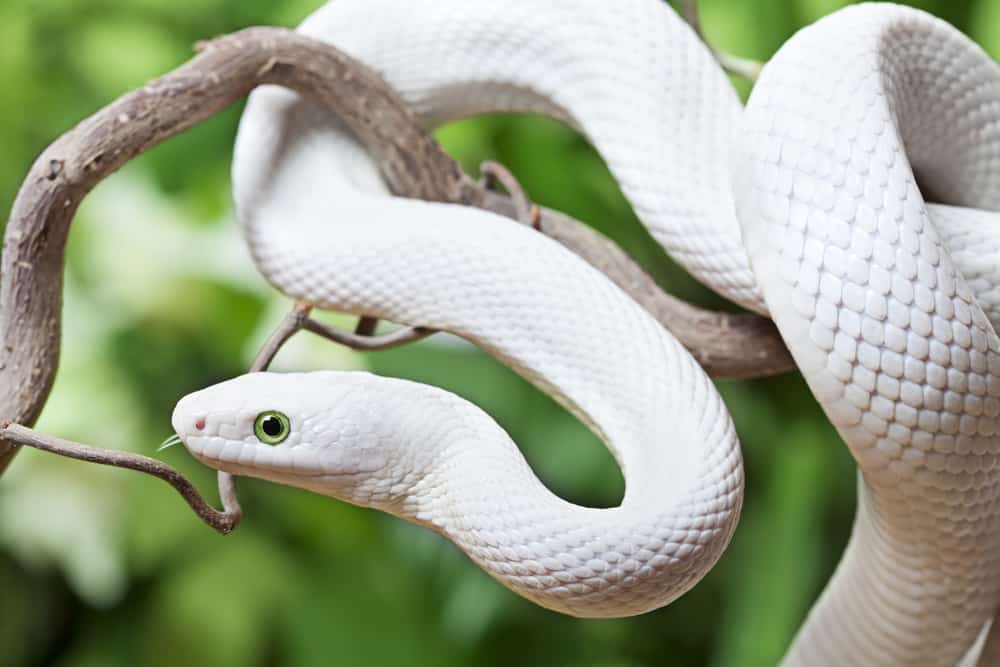 Having a dream of a white snake can be a confusing experience. Dreaming of a snake is generally seen to have a negative connotation but white animals are understood to bring good luck, balance, happiness, and health. So, which is it? Should you be worried or relieved after seeing a white snake in your dream?

As with many other dreams, the possible interpretations here are numerous. The combination of a venomous reptile and the color white, coupled with the exact tone and circumstances of the dream as well as your real-life emotions and reality can produce dozens of different symbolisms and meanings. Below, we’ll go over the 9 most common white snakes in dream interpretations.

What’s the meaning of seeing a white snake in a dream?

Seeing a pure white creature in your dream is typically understood to mean that your soul is sending you a message. That, plus the juxtaposition with the symbolism of a reptile can seem contradictory but it actually helps us figure out the precise white snake dream meaning more easily.

Depending on the specifics of the dream we can easily deduce whether it implies the presence of negative energy of some sort or of something positive such as wealth, happiness, balance, fertility, or others. Here are the main details you should watch out for and what meaning they can lead us to:

1. You are seeking or achieving a tentative balance in your life

One common dream many people have is that of both a white and black snake, coiling together in a soft of Yin and Yang symbol. As with the Hindu and Chinese symbols, a dream of two coiled white and black snakes usually means that you’ve achieved, are trying to achieve, or know you have to achieve a state of balance in your emotions and in your everyday life.

The extra nuance added by the snakes compared to just a Yin and Yang symbol is usually due to the subconscious understanding or belief that proper balance is rarely stable in the long term and involves juggling between elements and emotions that can be outright dangerous – just like snakes.

2. Someone is trying to influence you and bring imbalance to your otherwise peaceful mood

White animals may symbolize peace, wisdom, and tranquility, but snakes usually come into our dreams as a type of warning sign. So, when you dream of a white snake visiting you in a peaceful environment such as your home or still water, this is a warning by your subconscious mind that someone is trying to introduce negativity into your waking life.

This doesn’t mean that the snake itself is the harbinger of dark emotion – instead, our subconsciousness uses the inherent duplicity given to snakes to make the warning more poignant and drive us to action once we wake up.

3. You are tackling feelings of sadness, anxiety, and even depression

Seeing a giant white snake such as an albino python or anaconda is usually a very threatening and confusing sign. The correct white snake dream interpretation here is quite simple and similar to the cases above, however.

On the one hand, the white color of the snake is used by our subconscious to indicate that this is a positive spirit animal that brings us wisdom. On the other hand, the fact that the animal is a coiled snake and that it’s huge means that we are being warned about something bad and dangerous.

Most commonly, this dream is seen to signify the presence of a major mental health issue that we shouldn’t ignore – something as nasty as chronic or severe depression.

4. There is a certain seemingly small problem in your life you should stop ignoring

The opposite is also quite common – seeing a notably small white snake in your dream. When the emphasis is on the small size of the snake, this is usually interpreted to also mean a warning about an issue in your waking life but an issue that’s smaller by comparison and easier to ignore.

In fact, such dreams usually have the following scenario – you go around your home, office, or other familiar space, and you suddenly find the snake in a place you know well but check rarely. This clearly means that your subconscious mind is warning you about an issue that’s been present in your life for a long time, that you’ve ignored for a while, and that you should address as soon as possible.

5. A warning that you are doing something morally wrong

A different type of dream is one where a white snake bites you. This is often a white cobra or other well-known venomous snakes, usually ones that are native to your country or origin.

A dream of a snake attacking and biting you can seem easy to decipher but what should be noted here is the color white – if you’re bitten by a white snake in your dream, that usually happens while you were reaching for something or doing something particular. So, the clear meaning here is that the snake is warning you that you are doing something bad.

If the snake in your dream wasn’t white, we could have looked for a different meaning – you feel threatened, you’re afraid of betrayal, etc. But the color white is a clear sign that the snake itself is benevolent toward you and is biting you for a reason.

6. Killing a white snake in your dream can be a sign of health and wealth

In either of these three cases, the killing of the snake is seen as a good thing, as the removal of danger in your life. The color white comes on top of that to signify that things will be better in the future and that you don’t need to be afraid. Whereas, if the snake was black, that would have meant that you are not safe and there may be many more black snakes and dangers lurking near you.

All in all, this interpretation comes from the common understanding of snakes as symbols of transformation, new life, rebirth, the process of healing, getting a fresh start, and so on.

It’s natural to wonder when does a white snake mean harm or evil when it appears in your dream. And there are such cases – notably when its white color is sprinkled with black spots or yellow and red stripes, and when the snake attacks you unprovoked.

In this case, the not-fully-white color of the snake and the fact that it attacked you for no reason shows that it’s not a messenger for anything possible. The white on its scales is still important, however – it means that you’ve been used to viewing the snake as something positive but it’s now “showing its true colors” and attacking you.

In short, these dreams are common when your subconscious is afraid someone you trust is going to betray you – or already has.

8. Happiness and good fortune are ahead if you dream of a white and yellow snake

The opposite is also sometimes true, however, because colors such as yellow and green can have a positive connotation when they are on a white snake. In those cases – notably, when the snake in your dream isn’t aggressive toward you – this is a symbol of purity and of reaching a new beginning that’s full of happiness and good fortune.

9. You are afraid your greed may come back to bite you

Yellow and green can also be seen as colors associated with fear, greed, and avarice, however, so they can imply negative feelings and dangerous situations when they appear on an otherwise white snake. After all, the snake is a symbol of temptation in the Bible and the Genesis story about Eve and the snake in the Garden of Eden.

So, a white snake mixed with some yellow and green colors talking to you and tempting you to do something in your dream is a pretty clear sign that you should try and resist a particular temptation in your life.

In conclusion – what does it mean if you see a white snake in a dream?

Having a dream of a white snake or other similar white reptiles can be a negative or a positive sign depending on the dream’s details. The direct interpretation needs to be done by the dreamer themselves as they know best exactly what they dreamed about and what’s happening in their real life.

The 9 points above should serve as good guidance as to what each detail of a white snake dream can mean. Overall, most white snake interpretations are pretty positive and the few negative ones can be easily distinguished by the scenario of the dream – did the snake bite you, was it aggressive, was it killed by someone else, and so on.